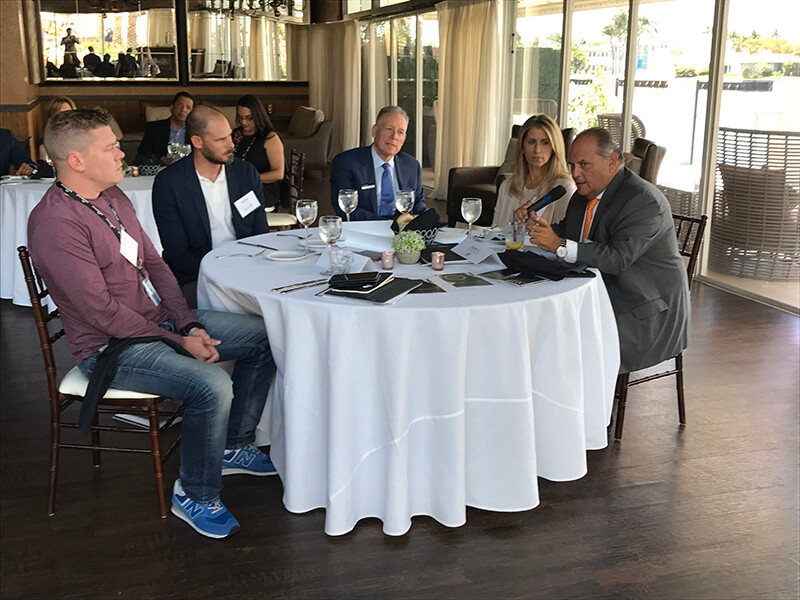 As SFBW continues to expand its editorial footprint and business partnerships in the region, members from the editorial advisory board met to talk business and discuss ways to enhance the publication. Editor Kevin Gale led the discussion over lunch at the Grateful Palate in Fort Lauderdale. Chairman and CEO Gary Press, along with the editorial and business development teams, attended the luncheon to mix and mingle.

Attending board members were:

Gale asked about their current business outlook, compared to what they thought it would be at the beginning of the year.

“I’ll tell you that ours is better than it has ever been probably since before the Great Recession,” Gorham said. “What we predicted was 5 percent growth for the year, but we are at 14 percent, which is purely a driver of our clients doing better.”

Homoky continued that sentiment. “Not just Celebrity, but the overall cruising industry is building a lot of ships,” she said. “We are rolling out new ships. Our industry is growing by leaps and bound. It is anticipated that 20 something million people will have cruised by next year.”

Gurowitz talked about the growing rental market and how developers are focused on offering amenity packages as though the resident is living in a luxurious condo. No matter which business you’re in, to stay competitive you must “think out of the box,” he said.

The advisory board met at Grateful Palate, which is on the Intracoastal Waterway in Fort Lauderdale

Ricci said, as interior designers, her company is working with renters—the market is ticking upward even though fewer people are buying homes.

Gale asked for thoughts about the stock market’s volatility so far this year. Dernis chimed in, saying it is normal to see volatility, but he has concerns looking ahead. “My concern is: Will there be economic growth? Is there going to be continuation of investment and then how is economic policy adjusted for that?” he said.

Gale asked Lee if tariffs have had any effect on his business, referring to reports that construction materials prices might increase. “We are not seeing anything yet and we are not seeing a trade war, but it’s still too early to know,” Lee said.

Epstein added that people are waiting to see what will happen.

Gale asked the group about how the Trump administration’s aim to cut back on regulations is impacting business so far. From a banking standpoint, Druey said it has helped loosen some of the underwriting guidelines, but problems exist.

For what’s ahead, he’s sees a shift. “I think you are going to see banking will get more aggressive over small businesses and the entrepreneurial side because of that, and I think you’ll see some of the private equity people get out because those returns aren’t going to be as good,” he said.♦