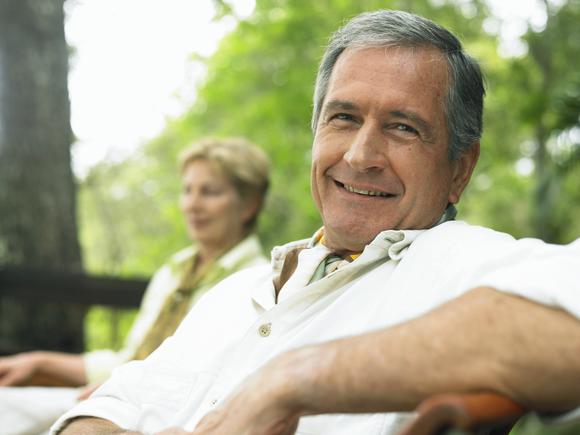 Should I Claim Social Security at 62 and Invest It?

Some retirees could come out far ahead by investing their benefits — but not all.

Many people can’t afford to wait before taking Social Security benefits, and that’s why so many people claim their Social Security at 62, the earliest age at which most retirement benefits become available. However, even those who have managed to set aside considerable savings toward retirement have to be smart about when to take their benefits, and they have the latitude to consider more options.

Although many advisors suggest that waiting to claim benefits is the safer move if you can afford it, many of these experts use methodologies that fail to take into account the possibility that you could invest the money you receive from Social Security. Incorporating new assumptions into your Social Security analysis can lead to different conclusions. In some cases, you might realize you should claim earlier if you think the return you can earn on those payments will make up for the smaller benefits you receive.

How investing makes a difference
When people are deciding when to take Social Security, one of the tenets they turn to comes from the Government Accountability Office. The GAO has argued that “the Social Security benefit formula adjusts monthly payments so that someone living to average life expectancy should receive about the same amount of benefits over their lifetime regardless of which age they claim.”

Setting aside for the moment the fact that Social Security’s benefit formula was created using now-outdated assumptions, one problem with the GAO statement is that it focuses on the total amount received from Social Security. This focus is the foundation of traditional Social Security breakeven analysis, which looks at the ages at which different claiming strategies will result in retirees receiving the same total benefits. In essence, it assumes that retirees won’t earn any return on their benefits, but will instead spend them.

For those who can afford to invest, the no-return assumption within traditional breakeven analysis is flawed. Investors will earn a return on the money they receive, and incorporating their to invest early Social Security benefits will have an impact on whether it makes sense for them to take benefits early or to wait for larger payments in the future.

Making early benefits look smart
Even modest return assumptions could dramatically affect your decision regarding when to claim Social Security. For instance, using traditional breakeven analysis that assumes full-retirement-age benefits of $1,000 per month, you get breakeven dates in the late 70s or early 80s, depending on which Social Security claiming ages you’re comparing. 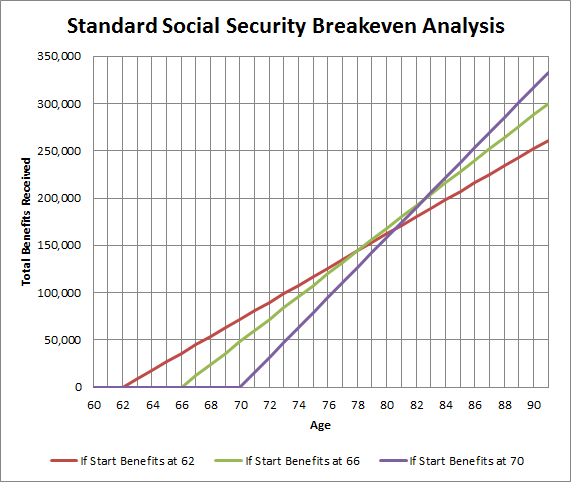 However, when you add in a 2% return assumption, the chart changes substantially: 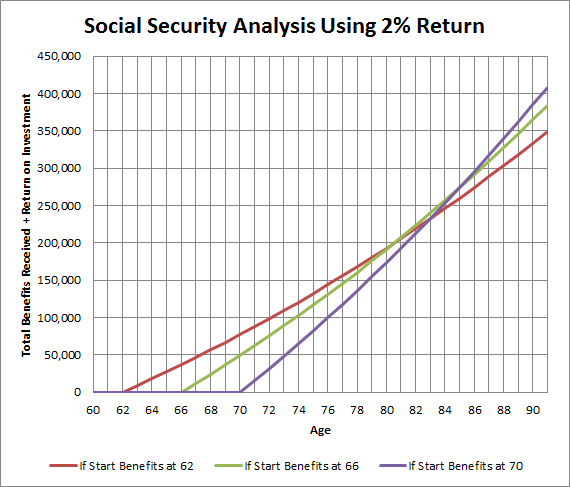 Above, you can see that the earliest breakeven dates are in the early 80s. Some extend out into the mid-80s. 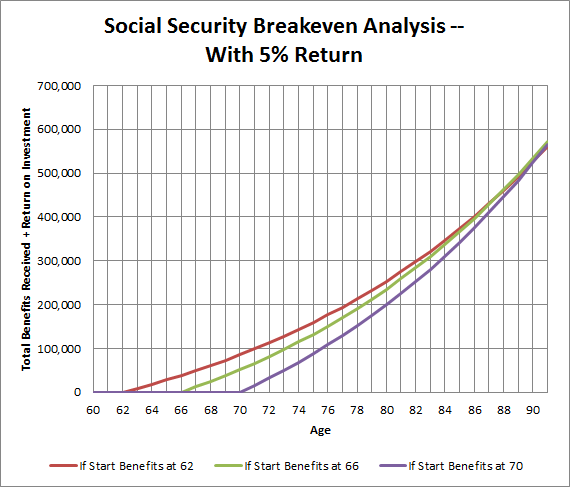 Finally, when you use an 8% return assumption, claiming early maintains a permanent lead. Claiming later never catches up with this return assumption within any reasonable timeframe, even when you extend the graph beyond age 105. 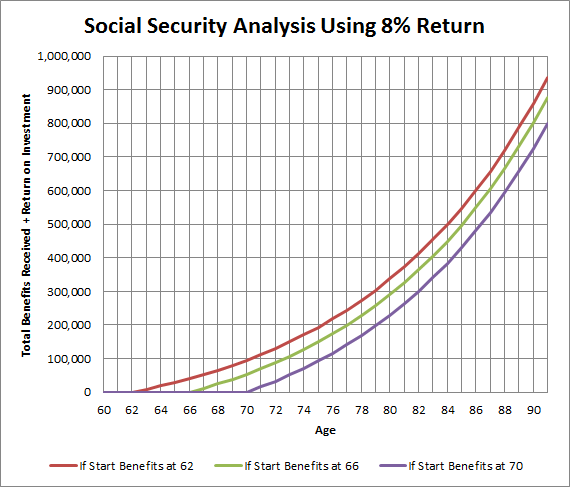 The dangers of Social Security analysis
Before you conclude that it always makes sense to take Social Security early and invest the payments if you can, you need to be aware of the risks involved. For one thing, any return assumption is based on the historical performance of the financial markets, and there’s no guarantee that the returns you’ve seen in past years will be repeated during your retirement years. If returns end up being lower than you expected, then the basis for making your decision could turn out to have been flawed.

In addition, many Social Security recipients won’t actually be able to get the benefits they expect if they claim early. For instance, if you still plan to work after turning 62, then your earnings could force you to forfeit your Social Security benefits back to the government. If that happens, you’ll be recompensated by being treated as though you had claimed later. However, you’ll end up in the same situation you would have been in if you simply hadn’t claimed early in the first place.

Taxes can play a role as well. If you claim benefits when your outside income is higher, then you’re more likely to have to pay income taxes on your Social Security. As a result, the after-tax amount you have left to invest could be lower, making early claiming less advantageous.

Finally, those who have family members who are eligible for Social Security benefits on their record face a more complicated analysis. In this case, you also have to take into account your own life expectancy, that of your spouse and any other potential beneficiaries, and the benefits they’ll be eligible for based on when you claim Social Security.

None of that means you shouldn’t consider taking Social Security early and investing it. For those who have the financial resources to do it, the advantages may far outweigh the potential downsides.