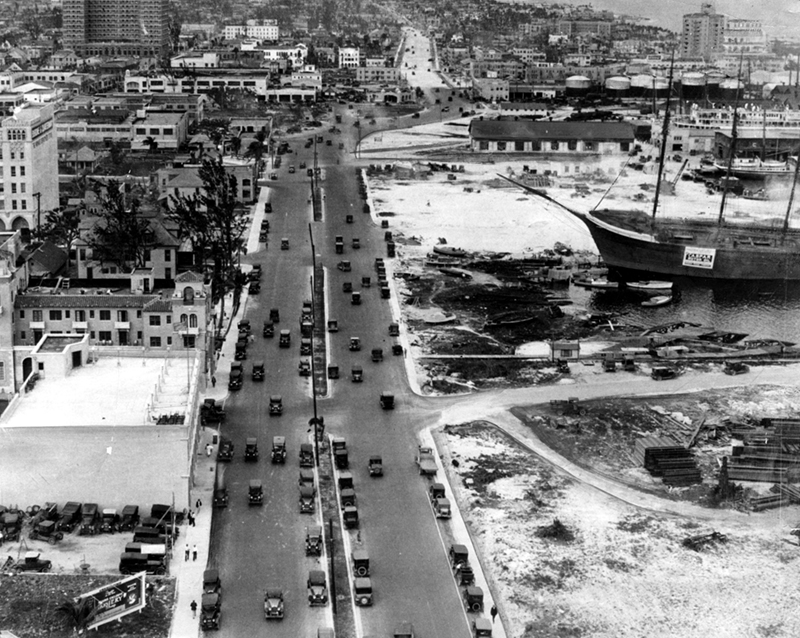 South Florida: Eye of the Storm

Hurricanes have shaped the destiny of South Florida. The area’s precarious position between two large bodies of water—the Atlantic Ocean to the east, the Gulf of Mexico to the west—makes it vulnerable, allowing storms to leave indelible marks on South Florida’s history.

The early 1920s in South Florida roared. Real estate boomed and northerners flocked to the sunny beaches like migrating birds. Midway through the decade, however, South Florida took some devastating blows. 1926 started with turmoil when Prinz Valdemar, a 241-foot steel-hulled schooner, capsized in the Port of Miami, closing it off for more than a month. In September, that was followed by the “Great Miami Hurricane,” a massive storm that ravaged the burgeoning downtown.

Witnesses reported surges as high as 15 feet, submerging MacArthur Causeway. But the real devastation occurred when the storm’s eye wall hit the heart of the city. New Floridians thought the storm had passed and filled the streets. Once the backside of the storm made landfall, many were caught unsheltered. It was a harsh but valuable lesson.

For the next three decades, the tropics remained relatively quiet, with few major storms making landfall in Miami. In 1960, Hurricane Donna changed that. The only major storm from that season, Donna turned parts of the Florida Keys into desolate land. Storm surges as high as 13 feet were recorded there. At its peak, sustained winds measured around 160 mph before the massive storm crept up the eastern coast of the United States. To date, Donna is the only storm to hit Florida, parts of North and South Carolina as well as areas of New England with hurricane-force winds.

However, the storm of the century was Hurricane Andrew. In 1992, it loomed in the Atlantic Ocean and built strength for 10 days before making landfall on the southern tip of the Florida mainland. The state was not prepared for the Category 5 storm, which had maximum sustained winds of 165 mph and gusts exceeding 200 mph. The storm roared west in about four hours, at approximately 18 mph.

Homestead was hardest hit, with entire neighborhoods obliterated. More than 100,000 people were displaced, and the community needed more than five years to rebuild. The storm caused more than $26 billion in damage—at the time, the costliest hurricane in U.S. history. It now ranks behind Katrina (2005, $108 billion), Sandy (2012, $50 billion) and Ike (2008, $29.5 billion), according to U.S. News and World Report.

This year marks the 25th anniversary of Andrew, and HistoryMiami Museum tells stories from the storm’s formation to its legacy. The exhibition, “Hurricane Andrew: 25 Years Later,” opens June 1 and runs through Jan. 14. The guest curator, meteorologist Brian Norcross, will appear at the opening reception. For information, visit historymiami.org. ↵