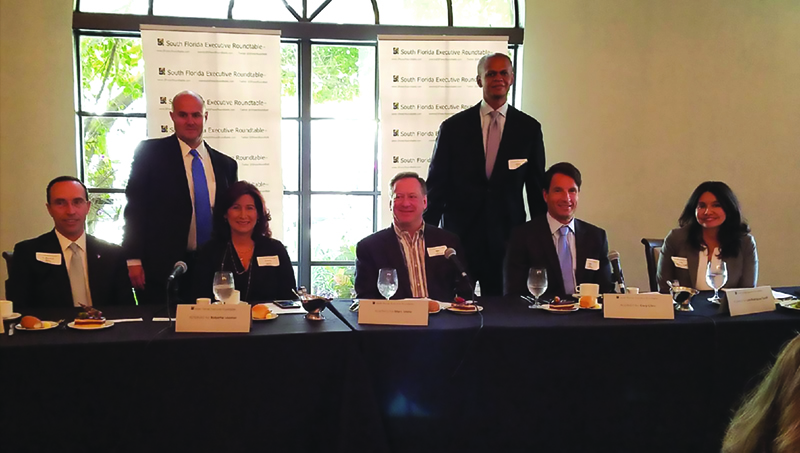 Driving innovation depends on the industry, panelists said March 9 at the Coral Gables Country Club. The group consisted of in-house general counsels from an array of industries who offered insights about growth and, in one case, stagnation.

• Gary Glass, general counsel, head of human resources and chief compliance officer for ScribeAmerica, a support-service provider for doctors and hospitals and a professional scribe training and management company.

• The moderator was Lida Rodriguez-Taseff, a partner in the Miami office of the Duane Morris law firm.

SFBW is the exclusive media sponsor of the South Florida Executive Roundtable, an invitation-only luncheon.

Here are some of the key takeaways:

Glass: My company is in the health care space. We have our heads spinning now because of what is going on in Washington. Most of my clients are large health care systems and hospital systems, and a lot are facing budget cuts. Other factors come in play, and health care in general is moving from a fee-for-service model to a value-based care.

Ahead of the Game

Loomar: The next innovation in the pharmaceutical industry is to get into the bio-similar [drug] market. Bio-similar are similar to the generics of the biological drugs.

The entire industry is just beginning. We are at the forefront of that industry. We are currently waiting for approval on two drugs—for instance, a cancer supplement drug that can boost white blood cells that allow people to tolerate chemotherapy better.

We are so far ahead of the industry that there are not even regulations in place yet to figure how to approve the drugs that people like us are making. We are making sure they are catching up to us and that, ultimately, when they do, they will match the innovation in the industry, which is causing lots of challenges, but it is exciting.

Stagnation Across the Nation

Marshall: When I graduated from law school and worked in Chicago, we had nearly 15,000 banks in this country. We are down to probably about 6,000. And a lot of that is due to the regulatory burden that banks are operating under, and the costs. Unless you can spread that cost over some kind of scale, it becomes very hard for the smaller community banks to survive. They literally have to go upstream, from a profitability perspective. It is nearly impossible.

From the bank’s perspective, I don’t think we are going to be the innovators. I think fintech [financial technology] is. Look at bitcoin. The real idea behind bitcoin is the democratization of payment. It’s about me paying you and not having to go to a bank and paying fees.

These innovative companies in the payment industry are taking off like a rocket. They are being slowed down by money remitter licensing requirements because they act in the same way—as a lender.

I think that’s the space that is going to have the greatest amount of innovation in our industry. My guess is that banks will ultimately realize there is value in these fields and will start to acquire these fintechs. But from bread-and-butter banks, I don’t see a lot of innovation going on.

Stone: I think a self-directive online brokerage has to be on the cutting edge. The execution at least today is fast. You are going to get your trades in seconds. So how can you add value? The next step for online brokers to succeed is [to recognize] that there is a price war going on.

To really succeed, I think you are you going to go the next step of artificial intelligence to customize tools.↵