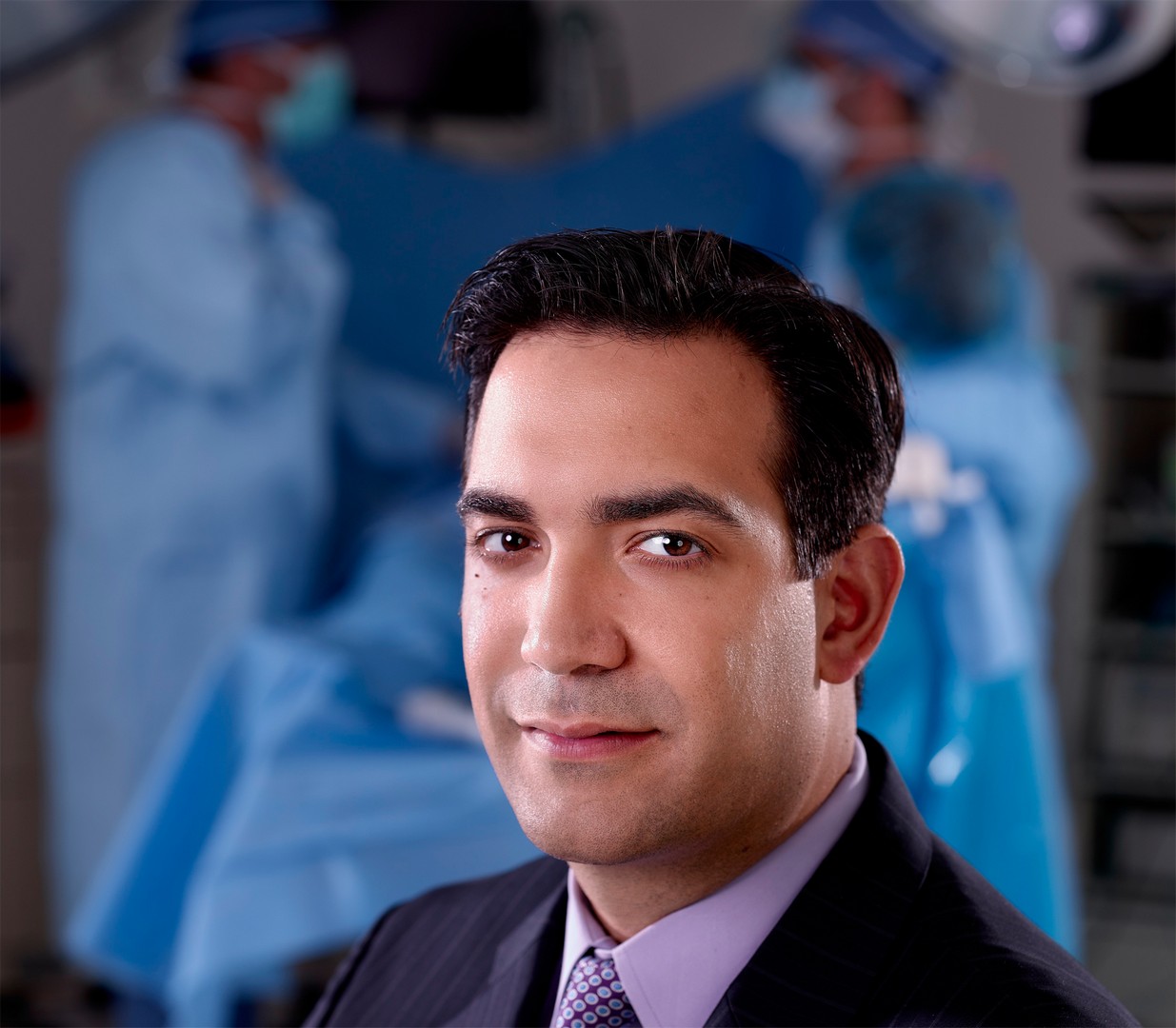 Alexander Gomez was working as a surgical technician when he saw an odd mixture of high technology and low technology. The high technology was the laparoscopes used to do minimally invasive surgery. The low technology was a warm bucket of water on the floor. Since operating rooms are so chilly, the laparoscopes were dipped into the bucket so they wouldn’t fog when being inserted into warm body cavities. Back in the late 1990s, Gomez thought that Broward General Medical Center was just using an outdated system. Then, while studying at Cornell University Medical College a few years later, he worked as a tech in a state-of-the-art surgery room at New York Presbyterian Hospital.

“He’s one of those guys that just had a true belief that not only I was going to make it, but I would not break our trust.”

There was the bucket again. That inspired Gomez to invent D-HELP, a disposable, battery-powered heating device that contains a special solution to keep lenses clean during surgery.
Gomez’s New Wave Surgical ended up on the Inc. 500 list and the company recently announced more than 1 million procedures had been performed with D-HELP. Gomez said that while getting on the Inc. list seemed like the beginning, it turned out to be the beginning of the end. His company gained so much attention that it eventually cut a deal to be bought
for more than $100 million by Covidien PLC (NYSE: COV), which has more than $10 billion a year in revenue.

In some ways, the New Wave Surgical story begins like many other South Florida success stories: A well educated professional getting frustrated with Fidel Castro and leaving Cuba.
Gomez said he drew a lot of inspiration from his grandfather, who was a physician in Cuba. He came to Miami briefly, but would have had to redo his residency to practice, his grandson says.
He realized he could instead practice in Puerto Rico, which had a need for doctors.

While Alexander Gomez was born in Puerto Rico, he grew up in Amherst, Mass., where his family owned a Cuban restaurant. Like many small business owners, his family had to put its heart and soul into the restaurant and young Alexander was expected to do his part when he wasn’t in school. “All you do is work,” he said, adding that he wanted to get away.
Gomez says he wasn’t a great student in high school and the pattern continued when he moved to South Florida. “I went to one semester at Nova Southeastern University and it wasn’t working,” he said. He knew how to bartend and worked at Bennigans and the Ale House, but started his medical career by going to Sheridan Vocational’s surgical technician school from 1997 to 1998. He worked at Broward General from 1998 to mid-1999. He really started getting on track when he moved back home and went to college at the University of Massachusetts. “When I went back to Massachusetts, I was so focused about school. I didn’t care about the partying,” Gomez says. He had a 3.9 average in biology and completed his degree in three years.

In 2002, he moved to New York City and began his medical education at Cornell. He was elected class president and then re-elected. He learned how to work with important people at the medical school and his classmates. But there was that bucket, so he started tinkering with concepts for what became D-HELP. He ultimately received three patents as the sole inventor and founded the company in 2003.

Early on, he asked surgeon Dr. Daniel McBride to co-sign a bank loan, but the bank turned Gomez down because he lacked enough credit and income history. McBride gave him a loan for $90,000. “He’s one of those guys that just had a true belief that not only I was going to make it, but I would not break our trust,” Gomez says. His mother’s 1920s Victorian house was mortgaged in 2007 to provide money for New Wave, says Gomez, who also mortgaged his own home.

Gomez found a mentor and main investor in Andy Widmark, an attorney who is also a professor at the Fuqua School of Business at Duke University. Widmark also owns a company that owns and manages shopping centers in 10 states and is managing partner of a venture investment fund he founded in Argentina. Most of New Wave’s investors came via Widmark, including members of Ariel Southeast Angel Partners (ASAP), Gomez says. Two members of New World Angels of North Florida also invested.

While Gomez is the company’s president, Widmark helped give gravitas to its leadership by serving as executive chairman. New Wave started out with an office in the Bronx and then a cramped $3,500 a month, 700-square-foot office in Queens that was crammed with four employees and boxes of inventory.

His investors wanted him to stay put, but Gomez made a proposal to move the company to Florida. “We don’t know what’s going to happen. We are tight on money. There is a chance things are going to get worse. If I’m going to work for nothing and people around here are going to work for little, we can’t stay in New York,” he recalls arguing. He pointed out the company
needed a couple of thousand square feet, which meant rent would be expensive. Some of the investors said they wanted the company to move to New Jersey or North Carolina where Widmark
was. “Then the argument was, “I got to be happy to some degree, too. I’m not going to be happy in New Jersey,�” Gomez recalls.

In 2009, he found 1,800 square feet in Coral Springs – half the rent and twice the size of New York, he says. “When I went to it, I said it was so big we will never need more space.” A lot of space was needed because New Wave decided to do its own manufacturing, Gomez says. The strategy was risky, but was somewhat born out of necessity. D-HELP was selling for $40 and the company was paying the manufacturer 75 percent of that, leaving little margin for profitability.

“That was a big turning point. When we started the company, the easiest thing to do is a virtual company – have someone make and sell it,” Gomez says. Not only did New Wave bring the manufacturing in house, but it cut assembly time from 30 minutes to 12 minutes. Sales took off – from $1 million in 2010 to $12 million in 2012. In the last quarter of 2013, New Wave Surgical had a $30 million annual run rate in sales and moved into a 34,000-square-foot plant in Pompano Beach. New Wave’s products were being used in 70,000 surgeries a month and the company was gaining traction in Germany and Japan. “People started taking notice,” Gomez says.

New Wave had great gross margins, but taxes, including Obamacare’s new surgical product tax, were taking a big chunk out. Like many other fast-growing companies, New Wave needed fresh capital, which would dilute the stake of existing shareholders. Gomez had seen his family’s stake go from 95 percent to 19 percent. New Wave engaged an investment banker, and big players such as Johnson & Johnson became interested. Then two of the companies emerged as suitors to buy the whole company and the bidding started.

“I was really amped to keep going. The realities of what it meant to keep going made me reconsider,” Gomez says. “Then, the final number that came out was higher than I thought they would give.” The company was sold for more than $100 million and the day before SFBW visited, the Justice Department’s time period to file an anti-trust objection had expired. The board approved giving 1 percent of the sales price to all employees making hourly wages and $1.5 million for options, Gomez said. Anyone that’s been with the company more than three years is getting a least one year of salary. One benefit of the heated negotiations is that Gomez didn’t have to sign a non-compete. Gomez hopes Ceridian will keep the 140-employee company in Pompano Beach and is anticipating a role as a consultant. “I will because I want to help them. I want to see the product used around the world,” Gomez says. While Gomez will have time to enjoy his new Maserati and the 10-month-old daughter, it doesn’t sound like he’s finished as an entrepreneur. He expects to look at helping other companies with good products that are struggling because they are not manufacturing themselves or having difficulty executing a business plan. “I also have a couple of ideas that I get to push out now,” he says.