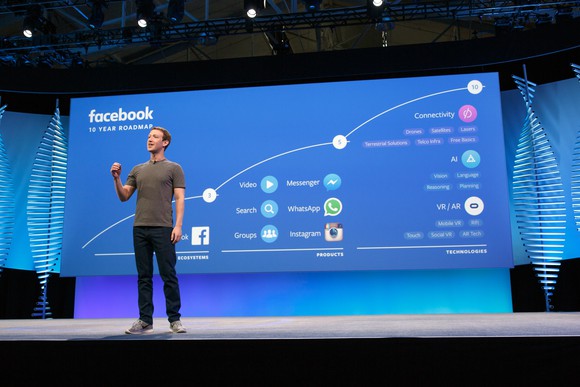 Facebook (NASDAQ:FB) extended its long streak of market-beating quarters when it reported its second-quarter results last week. Shares surged after the report as investors recalibrated their expectations for the company.

While the social network’s skyrocketing revenue and net income was definitely the quarter’s biggest highlight, there’s more to the quarter than these key metrics. Investors can glean some other useful insights from management’s comments during the second-quarter earnings call, where Facebook’s leaders discussed their Messenger strategy, explained how mobile video ads are still a major catalyst for the company, and more.

Here are four must-read quotes from Facebook management during the call.

Facebook is already making progress on its new mission

Just as Facebook hit 2 billion monthly active users, CEO Mark Zuckerberg announced the company was shifting its mission from connecting the world to bringing the world closer together. The new mission statement means Facebook will be focusing on increasing the number of its members that are a part of meaningful groups.

And right now, over 100 million people are members of these groups — from new parents to people suffering from rare diseases. These groups often span online and offline — and bring people together physically as well as over the internet.

Facebook’s goal is to help over 1 billion people be a part of these meaningful communities. Zuckerberg said that six months since the company began these efforts, 50% more people have joined these groups.

Facebook management once again reminded investors about the “mega trend” of mobile video for the company.

“Video is an important part of our mobile strategy,” said Facebook’s chief operating officer, Sheryl Sandberg. “More video is being shared and watched on Facebook than ever before, and it’s increasingly helping people and businesses connect. … In a mobile environment, native mobile video ads typically outperform more traditional ads.”

Zuckerberg, too, was sure to chime in on how important video is for Facebook. “[V]ideo will continue to be a big focus and area of investment for us,” he said. “It’s growing quickly, and we’re introducing new features to make the video experience even better.”

After Facebook’s recent big move to bring ads to Messenger, many investors may think that ads are Facebook’s primary focus with the messaging app. But when it comes to monetizing Messenger, ads on the platform are secondary — at least for now.

The biggest strategic thing that we really need to do in messaging right now is make it so that people have organically interact with businesses and that is a good interaction both for people and for the businesses. So here’s one way to think about this.

If you’re a business and you have a higher ROI [return on investment] for interacting with a person in your messaging thread than you do on the mobile web or trying to get them to install an app, then that creates this positive feedback loop where you’re going to point your ad toward the Messenger thread, you’re going to invest more of your engineering resources in building out the content and experience around the Messenger thread.

Here’s exactly why Facebook expects its revenue growth to decelerate

There’s more to Facebook’s expected revenue slowdown than the social network’s often-cited forecast for declining ad-load growth in the second half of the year. While the expectation that ad-load growth will level off is certainly the primary reason why management is guiding for its revenue growth to decelerate, there are other factors for investors to consider. Here’s how Facebook CFO David Wehner explained it:

As we have discussed before, we continue to expect that Facebook ad load will play a less significant factor driving advertising revenue growth going forward and that desktop ad revenue growth rates will slow in the second half of 2017 when we begin to lap efforts to limit the impact of ad blockers.

In addition, we expect that our strategic focus on driving engagement with mobile video may slow advertising impression growth given the relatively fewer ad impressions in video relative to News Feed.

Wehner also noted that investors should not expect Facebook’s early efforts to monetize Messenger to offset these factors.

Overall, Facebook’s earnings call put the spotlight on Facebook’s strengths. Sure, management still expects revenue growth to come down meaningfully. But this was a known issue.

10 stocks we like better than Facebook
When investing geniuses David and Tom Gardner have a stock tip, it can pay to listen. After all, the newsletter they have run for over a decade, Motley Fool Stock Advisor, has tripled the market.*

David and Tom just revealed what they believe are the ten best stocks for investors to buy right now… and Facebook wasn’t one of them! That’s right — they think these 10 stocks are even better buys.