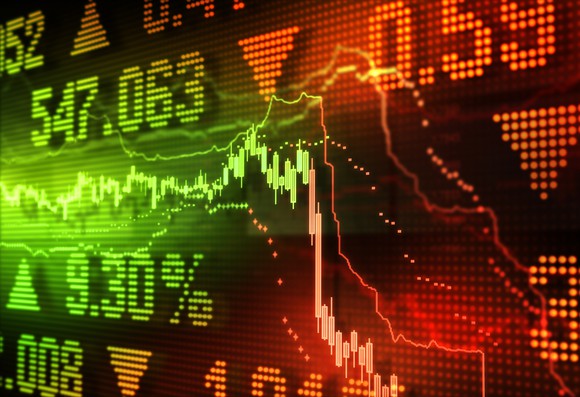 7 Reasons the Stock Market Could Fall, and the 1 Reason You Shouldn’t Sell

Sticking to your long-term game plan and not giving in to the short-term noise is often the best investing strategy.

It’s hard to believe we only have seven months in the books, because 2016 has already been a wild year for U.S. stocks.

After beginning the year with the worst two-week start in history — all three major U.S. indexes fell between 8% and 10% — the broad-based S&P 500 (SNPINDEX:^GSPC)staged its most voracious intra-quarter rally beginning in mid-February to end the first-quarter higher. It was the biggest intra-quarter reversal investors have witnessed since 1933.

Even more recently we dealt with the swoon caused by Britain’s decision to leave the European Union, known as Brexit. This tumble would also prove short-lived, with both the S&P 500 and Dow Jones Industrial Average moving forward to new all-time highs.

Seven reasons the stock market could be readying to tumble

However, with stocks pushing into record territory once again, the calls for a substantial stock market correction continue to gain steam. For instance, on Monday investment banking giant Goldman Sachs downgraded equities to “underweight” based on its three-month asset allocation, noting that stocks are more vulnerable to growth and policy disappointments in the coming months. Could Goldman’s call prove prescient? It’s quite possible since there are seven reasons to suggest that U.S. stocks could be headed for a fall.

One of the prime reasons U.S. stocks could be headed lower is falling crude oil prices. Though falling crude does lower the price you and I pay at the pump, providing a short-term boost in disposable cash, the drop in oil prices can be disastrous domestically and overseas over the long-term. We’re talking about loss of jobs in the U.S., as well as the ongoing potential for energy loan defaults with banks. Consumers in overseas countries with strong ties to oil may also reduce their consumption, hurting U.S. multinational companies.

Another concern can be traced to weaker-than-expected GDP growth in the United States. GDP growth in the fourth quarter came in at a subpar 1.4% , while first quarter GDP ticked even lower to 1.1%. Both figures were revised higher from the initial estimate, but growth is clearly coming in well below what the Federal Reserve would like to see despite the Fed’s keeping its federal funds target rates very close to record lows. If there’s no genuine economic growth, it could be difficult for U.S. stocks to head higher.

Political uncertainty is another catalyst that could weigh on U.S. stocks. This is definitely an “election of firsts,” with Hillary Clinton becoming the first woman to receive a major party’s presidential nomination, and Donald Trump, who has no political background, securing the Republican nomination. Both candidates have suggested economic policies that could be downright dangerous for seniors, baby boomers, and/or working-class Americans. Wall Street prefers certainty, and right now there’s simply none when it comes to the political landscape.

Speaking of uncertainty, Britain’s decision to leave the EU has every stock market analyst from near to far trying to predict what’ll happen next. There’s no precedent to a country in the EU enacting Article 50 and leaving, so it’s unclear how this impacts the financial stability of the EU, or if Britain could struggle to enact trade deals with its EU neighbors. The impact could be negligible, or it could wind up pushing the region into a recession — we just don’t know.

Across the other pond we have China, an emerging economy that’s on pace to someday surpass the U.S. in total annual GDP. Wall Street has almost taken for granted that China grew its economy by an average of roughly 10% per year for three decades. In recent months that growth has slowed dramatically, to below 7%. In the U.S. we’d jump for joy if GDP growth hit 7%. However, with China acting as a large buyer of goods, slowing growth bodes poorly for companies that are exporting to China. 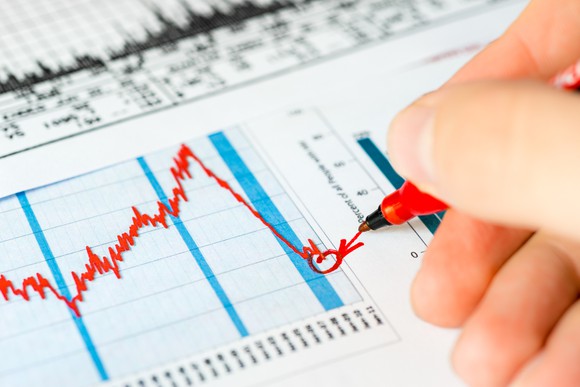 U.S. stocks themselves aren’t too cheap anymore, either. Based on data from The Wall Street Journal through July 29, 2016, the S&P 500 had a trailing P/E of 25. Comparatively, its trailing P/E ratio was 21.6 during this time period last year. Weakness in the energy sector, and disappointment among financial stocks that had been looking for rate hikes, have weighed on the broad-based index. Even looking ahead, the S&P 500’s forward P/E of 18.4 for 2017 doesn’t look all too inexpensive.

The prime reason you shouldn’t sell

The list of possible downside catalysts for the stock market could probably go on, but it doesn’t have to. Even if the stock market decides to dip 10%, 20%, or even 30%, there’s really no viable reason for long-term investors to cash out their chips and run for the hills. The following chart tells you everything you need to know about the U.S. stock market: 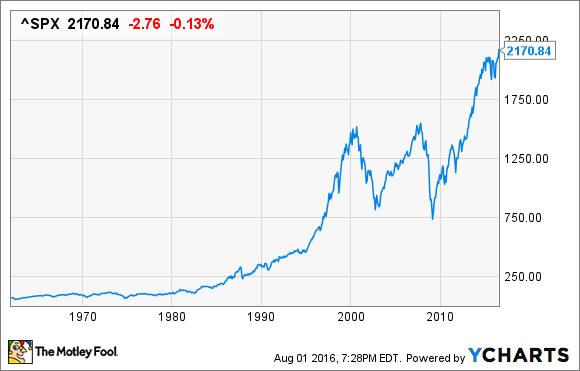 As you can see, the stock market does tend to hit a speed bump from time to time. However, over the long run stock valuations usually increase. Does this mean you’re going to pick winners every time? Not exactly. But it does mean that if you pick a diverse number of high-quality stocks and stick with them for extended periods of time, you should be able to outperform inflation and many other asset classes.

Historically, the stock market has gained about 7% per year, which includes reinvesting any dividends received back into more shares of stock. Inflation, on the other hand, typically averages in the 3% range. This means long-term investors are creating real long-term wealth by buying and holding stocks. 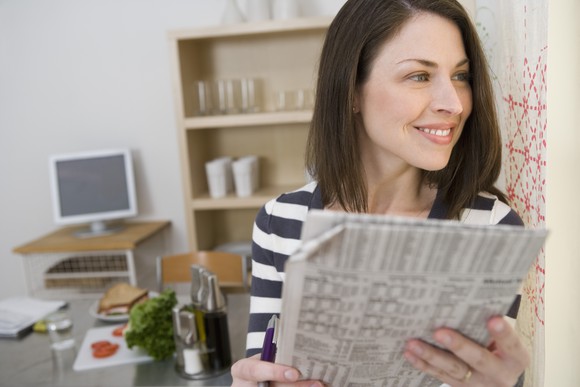 Not only will you have a shot to shore up your financial future by purchasing and holding high quality stocks over the long run, but you’ll also remove emotions from your investing strategy, as well as give yourself the best possible outlook come tax time.

Imagine if you’d dove out of the stock market earlier this year following our worst two-week start on record. You’d look pretty foolish now (with a small ‘f’) given that the S&P 500 has bounced nearly 15% from its yearly lows.

There will always be catalysts that could push the stock market lower, but history shows us that, over time, good stocks head higher. Stick to your game plan and don’t give in to short-term emotions or temptations to sell.

10 stocks we like better than S&P 500 INDEX
When investing geniuses David and Tom Gardner have a stock tip, it can pay to listen. After all, the newsletter they have run for over a decade, Motley Fool Stock Advisor, has nearly tripled the market.*

David and Tom just revealed what they believe are the ten best stocks for investors to buy right now… and S&P 500 INDEX wasn’t one of them! That’s right — they think these 10 stocks are even better buys.