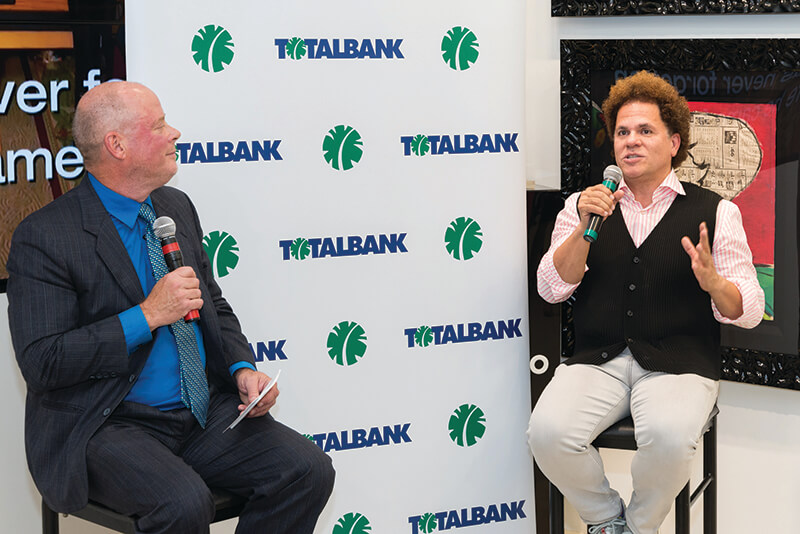 An Evening with Britto

While a guitarist played soft acoustic music in the background, a crowd of elite professionals mingled amid the brilliant and colorful artwork at Britto Central, 1102 Lincoln Road. SFBW was the media partner for the event.

Editor Kevin Gale conducted an interview with Britto in which the internationally sought-after neo-pop artist divulged what inspires him. Hint: It’s what he finds around him—subjects such as animals, nature and people, but, most of all, love. “I love what I do, and I want to share it with everyone,” Britto says.

The Brazilian-born Britto, a Miami resident, has a success story any budding artist would envy. The self-taught painter’s rag-to-riches tale about becoming a self-made, worldwide commercial success has landed him major deals with corporations throughout his artistic career. It all started when he painted scraps of cardboard and sold them in Coconut Grove.

He eventually was commissioned to design bottle labels for Absolute Vodka, and Britto was on his way to stardom. The New York Times describes his works as exuding “warmth, optimism and love,” which are the characteristics that attracts leagues of collectors and buyers—from the ultrawealthy, celebrities and politicians to the kid who loves Disney figurines.

Among his most recent efforts is his largest sculpture—a giant pig for NetDragon Websoft’s headquarters in Fuzhou, China. Britto’s pop sensibility has led to collaborations with international companies such as Audi, Bentley, Coca-Cola, Walt Disney, Evian, Hublot and Mattel.

When asked about the biggest misconceptions about being an artist and an entrepreneur, he says that he doesn’t worry about it. Instead, he chooses to focus on the optimistic side of life. “I wouldn’t get anything done if I concentrated on the negative,” he says.

One stressful moment, however, was during Hurricane Irma. He was out traveling in Europe and he had to rely on his team to secure his artwork. Fortunately, there were just some minor leaks at Britto Central, and the works were unscathed.

He also discussed the growing side of his e-commerce business, which is handled at his Wynwood headquarters. Consumers can buy everything from Britto keychains and luggage to Disney figurines, the latter being part of a longstanding deal and resulting in his biggest sellers.

Since sales are up, he plans to outsource the e-commerce operation. “It’s become too much for us to do,” he says. He marvels at the power of social media, telling how an Instagram post led to the sale of a major work that costs in the tens of thousands.

Britto’s advice to entrepreneurs in general is that they should pursue their passion. In his case, he told the audience he was going to be an ambassador and went off to law school but realized he wouldn’t be happy doing so. He dropped out of law school and launched his career as an artist.

Britto has exhibited in galleries and museums in more than 100 countries, including the Salon de la Société Nationale des Beaux-Arts exhibition at Paris’ Carrousel du Louvre in 2008 and 2010. In 2013, Maria Elena and Carlos Slim Domit invited Romero to be the first living artist to exhibit at Museo Soumaya. Slim is the son of Carlos Slim Hélu, who was ranked as the world’s wealthiest billionaire from 2010 to 2013.

The back of Britto Central is filled with photos of Britto posing with a broad array of celebrities and installations of his works around the globe. He has created public art installations for the 02 Dome in Berlin, New York’s John F. Kennedy Airport and Cirque Du Soleil at Super Bowl XLI, and he has been credited with the largest monumental sculpture in the history of London’s Hyde Park. He was an official artist for the 2010 World Cup in South Africa, an ambassador to the 2014 FIFA World Cup in Brazil, and was invited to be an honorary torchbearer for the 2016 Olympic Games in Rio de Janeiro.

Britto’s big heart extends to the greater good as he has donated his time, art and resources to more than 250 charitable organizations worldwide. He believes “art is too important not to share.” ♦