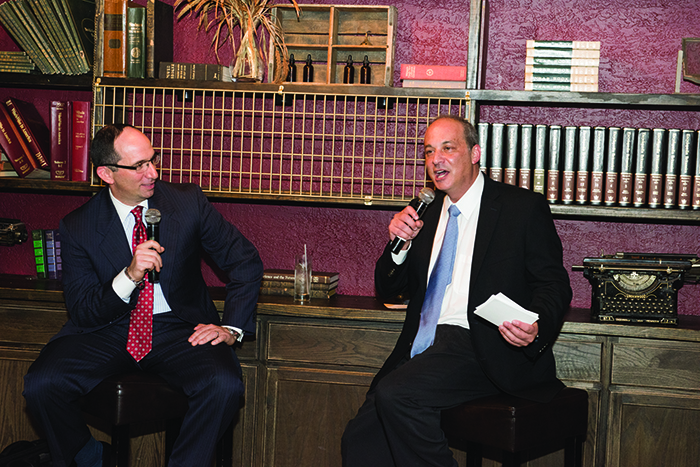 For two decades, Andrew Cagnetta has been the CEO of Transworld Business Advisors, the state’s biggest company when it comes to successfully putting together buyers and sellers of businesses.

Transworld also has a franchise consulting side that gives entrepreneurs access to more than 200 prescreened franchises. Its franchise development service assists people in growing their businesses through franchising. Transworld itself has also turned into a franchise business, allying with United Franchise Group.

Cagnetta was interviewed before a live audience at Stache 1920s Drinking Den by Gary Press, chairman and CEO of SFBW and Lifestyle Media Group. The CEO Connect series, which is an invitation-only event developed by SFBW, is sponsored by TD Bank. The following is an edited transcript of the conversation.

Before we get real serious, let’s talk about heavy metal. Is it true that you play a mean Judas Priest and have 26 guitars?

I do have a lot of guitars. I’m not sure about playing a “mean” Judas Priest, but I can play Judas Priest.

I understand your family manufactured guitars for 90 years? Did that help give you entrepreneurial lessons and insight?

I think it did. They were a very successful company for many years that grew to a 20,000-square-foot facility on Long Island. We were just run over by the Japanese manufacturing surge in the late 1970s.

It taught me that you have to watch your back and always watch for market forces. I talk about the “Uber-ization” of industries. You’ve see Uber run over the taxi industry. They made a better widget and have better customer service. We are all in danger of that if we don’t keep on top of customer service.

Just how long was your hair when you worked in marketing and promotions for Kramer Guitars after college?

It was past my shoulders – it was longer than my nose! It was the 1990s. Eddie Van Halen was huge and we were selling $1 million a month in guitars. We used to have drug testing at Kramer; if you passed them, they would give you some.

You seem to have had leadership qualities from a young age – I see you were president of your college fraternity, Phi Sigma Kappa, at Lehigh University. Did you always want to be a leader?

Everybody does something dumb once. Being president of your fraternity is probably the dumbest thing you could do because you are in charge of 25 drunken idiots.

I remember my principal called me into his office in high school. I asked, “Why am I here?” He said, “You are one of the leaders in this high school.” I got a strong leadership ethic from my grandfather.

How did you end up moving here?

Allison, my wife, grew up in Hollywood. She went to the University of Hartford and got her undergraduate degree and master’s. We had moved back to New Jersey, where I grew up, and it snowed 22 times one winter. Allison slid her car into a Pepsi truck and said, “I want to move home.”

Allison’s dad wanted us to move here and raise a family. I said, “Make me a deal I can’t refuse.” He asked, “What do you want to do?” I said, “I want to own another business. Put it in writing.” He actually put it in a letter.

We moved down in a Honda Accord and lived in Allison’s high school bedroom for a year and a half.

I love my father-in-law. He blindly stroked the check for me to buy Transworld – and he was absolutely nuts to do it.

Your website says you were looking to buy a business and then met Don and Bonnie Parrish, who owned Transworld. What made you go to work for them initially instead of buying a business?

I went to a lot of business brokers looking to buy a business. I felt like I was in a used car sales lot before I went to Transworld. They were very professional and friendly and they asked me to join the business as a salesperson.

I had a good first year. I sold a metal recycling business in Miami and made enough to put a down payment on a townhouse.

How alive is the American Dream for entrepreneurs and what can be done to make it better?

I think it’s more alive than it’s ever been. The Internet is a great place. You see people starting businesses like Facebook and Amazon. People who before didn’t have the means or education to start a business are really successful people. You watch these millennials coming out and also the kids that went and fought wars for us in Iraq and Afghanistan. I think the greatest generation is still coming.

I think we absolutely have the capacity to elect Donald Trump. We are the reality TV world. Frankly, I think it’s scary. I think it’s a popularity contest at this point. I’m a middle-of-the-road guy. I lean toward the fiscal conservative, but I’m socially liberal. I think marijuana should be legalized. I don’t know what party that is, but I want to vote for them.

What are the biggest obstacles to someone successfully selling their business?

Third-party interference. It could be landlords, attorneys, accountants or people at a cocktail party. Also, someone who thinks his or her business is worth too much.

You have sold a lot of businesses. What are the top qualities of the small business owners who showed the most success?

They are smart enough to not go in there and change things right away. Sometimes, if you follow the system of the old person, you are better off. Sometimes you have to sit back and see what works and what doesn’t.

The second thing is work ethic. At the end of the day, you have to work hard. My famous line to Allison is, “I’m not going to be home from Monday through Thursday. I’m going to be at a networking event.”

Lastly, you do need some money and resources. People are always looking for money to start a business. They all underestimate how much they need.”

Out of all the times where we have a business owner and seller sign a deal,
45 percent of those deals die. Everything else just gets in the way. It could be insurance. Bankers have to fit things in their underwriting. Buyers and sellers don’t tell you things, like, “I had a bankruptcy” or “One of my service reps ran over a little old lady last week, is that an issue?” or “Our biggest customer quit last week.” How much of your business is that? “Oh, 80 percent.” That can be an issue. We look under the kimono and it can be ugly.

Audience: What’s the major number that determines what a business should be worth?

All you need to know is businesses are worth two times earnings – it includes all the owners” salary and benefits. When you get to $1 million, you get to a price of four to six times earning. Assets are important, but they are not really important. What’s important is: What is the buyer going to make with your business? ?