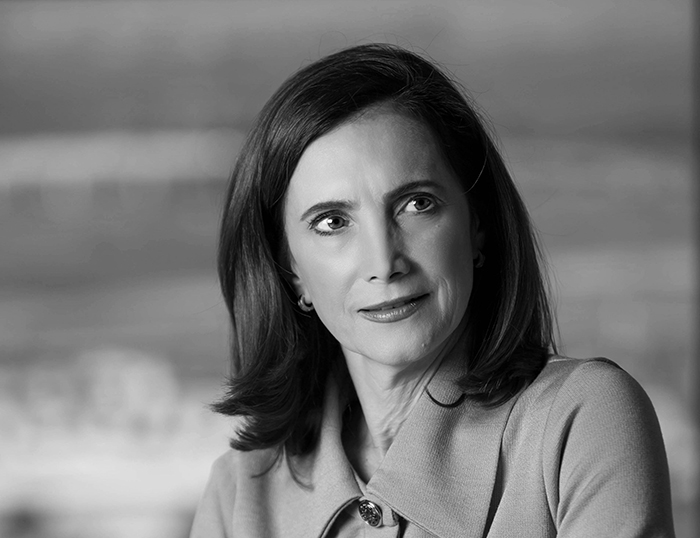 By Joseph A. Mann Jr. / Photography by Larry Wood

As CEO of Miami operations at Itaú Private Bank International, the Miami-born banker is in charge of managing nearly $11.5 billion in assets deposited by high net worth Brazilians and other clients from Latin America.

Sevilla-Sacasa works with a staff of 153 in Miami to oversee a key unit of São Paulo-based Itaú Private Bank, a subsidiary of Itaú Unibanco, the largest private bank in Brazil and the largest nongovernment bank in Latin America.

“From our U.S. base in Miami, we are able to provide a sophisticated offshore investment platform for our Brazilian clients,” says Sevilla-Sacasa, who earned her bachelor’s degree from the University of Miami. “At the same time, our base in Miami allows us to offer an attractive offshore investment option for our clients in other Latin American markets.”

Itaú Private Bank serves its clients locally and internationally, she notes. “In Brazil, for example, many of our clients may choose to maintain the bulk of their assets locally in Brazilian securities and other assets. Or, they may choose to invest offshore in international securities and other assets. When they decide to move some of their assets offshore is when Itaú’s Miami operation becomes involved.”

Itaú offers clients who invest a minimum of $1 million a high level of personalized wealth management services. Beginning earlier this year, Itaú also has offered “international investment accounts” to clients who invest between $100,000 and $1 million. These accounts give customers access to global markets and are managed by the clients themselves from the Itaú online platform, with assistance from the bank’s wealth management team in Miami.

How does Itaú compete with other large financial institutions that offer international and private banking services? “We listen to our clients and we design solutions that are tailored to their needs,” says Sevilla-Sacasa. “Every country has its particular challenges, and we are here to provide solutions.”

This approach seems to have generated excellent results, since Itaú’s Miami operations have shown spectacular growth in recent years. The office got its start in 2007 after Itaú took over the local private banking operations of BankBoston International and ABN AMRO. By the end of 2009, the first full year of stable consolidated operations, Itaú Private Bank in Miami had assets of $3.9 billion. By the end of 2015, its assets were expected to reach $11.5 billion, for an annual average growth of 20 percent over the last six years.

While capital flight has been a problem for Brazil in recent years due to a declining economic and deteriorating political situation, Sevilla-Sacasa points out that increases in investment here by Brazilians and other Latin Americans has been steady.

“There hasn’t been any kind of surge or sudden increase,” she says. “Typically, our clients do not react to short-term events. In fact, we encourage them to follow a carefully designed, diversified global investment plan.”

As one part of Itaú’s global growth strategy, it is launching a new service in Miami for 2016: Itaú Family Office. This business, which Itaú has offered from Brazil for several years, provides a range of services to large, family-owned companies based in Latin America. These services include evaluating and managing global asset allocation, assessing risk levels for different investments and international account consolidation.

Sevilla-Sacasa became CEO of Itaú Miami in 2012 after more than three decades in international banking and a short stint in the academic world.

After graduating from UM in 1977, she decided to prepare for an international career, earning an MBA in international management from the Thunderbird School of Global Management in Arizona. “My first job in banking was in 1978 as an international corporate banking trainee at Southeast Bank in Miami,” she says.

Sevilla-Sacasa gained extensive experience and new international responsibilities at Southeast, thanks to her growing knowledge of banking operations and her ability to speak four languages: English, Spanish, Portuguese and French.

She spent several years at Southeast Bank, but after the Latin America debt crisis in the early 1980s, the region went into a long economic downturn and became less important for international commercial banks.

In 2011, the year before she joined Itaú, Sevilla-Sacasa was named interim dean of the University of Miami School of Business Administration while the university searched for a new dean.

In addition to her responsibilities at Itaú, Sevilla-Sacasa serves as trust manager for Camden Property Trust, a publicly traded REIT that owns, manages, acquires, develops and builds multifamily apartment communities. She also is a trustee for the Delaware Investments Family of Funds, which includes over 70 mutual funds managed by Delaware Investments, with assets of more than $155 billion under management.

Sevilla-Sacasa, who is married and has three children, is proud of Itaú’s contributions to the community. For example, the bank has sponsored an exhibit of the Brazilian painter, Beatriz Milhazes, at the Pérez Art Museum Miami and launched a pilot program in partnership with the United Way at the Center Mater day care center, where members of the Itaú Miami family read to children. In addition, Itaú employees volunteer for other community programs, including the Susan G. Komen Race for the Cure.

“Everything we do in Miami reflects Itaú’s community commitments in Brazil: art, education, culture and sports,” Sevilla-Sacasa says. “Our increased commitment to the Miami Open is aligned with Itaú’s growth strategy throughout the region. As we grow throughout Latin America, we will continue to grow in Miami, our most important and most visible operation outside of Latin America.”