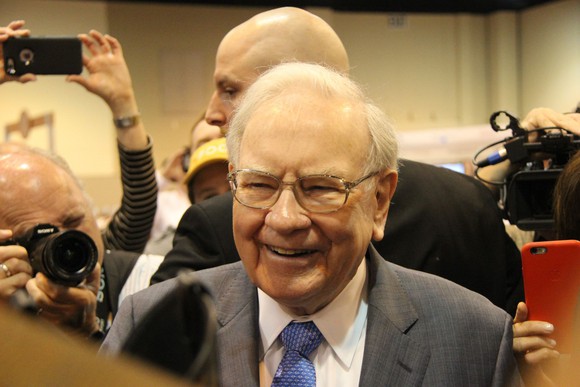 Buffett Dislikes Most Hedge Fund Managers — Except His Own

Buffett’s dour view of hedge fund managers doesn’t extend to the two managers he hired for Berkshire Hathaway. It all comes down to the price he’s paying for them to manage part of Berkshire’s public stock portfolio.

Warren Buffett rarely has good things to say about hedge fund managers, but he makes exception for the two he hired for his holding company. Todd Combs and Tedd Weschler, who managed their own hedge funds before joining Berkshire Hathaway (NYSE:BRK-A)(NYSE:BRK-B), together manage about $21 billion of Berkshire’s wealth, but they do it for next to nothing when compared to the traditional hedge fund operation.

If it sounds like a lot, it is, but their compensation pales in comparison to the prototypical hedge fund model. Hedge funds traditionally operate under the so-called “2-and-20” fee model, in which managers take a 2% management fee on assets plus 20% of returns. Berkshire is effectively paying 0.01-and-10, less than half the typical take of the quintessential hedge fund fee.

The power of incentives

Buffett and Charlie Munger have spent more time than most thinking about the power of employee incentives and compensation, which shows in the unique way Berkshire pays its portfolio managers.

Bonuses are doled out for performance over rolling three year periods, and 20% of the bonus pool is actually tied to the other portfolio manager’s performance. Buffett says that linking part of their compensation to the other’s performance ensures that Combs and Weschler will have every reason to work together, rather than hoard their best ideas.

A rolling three-year period for measuring performance isn’t a unique compensation feature, but it does create an important incentive structure for Combs and Weschler. Because of it, neither manager has the incentive to make high-risk bets to catch up to the index when their returns lag the S&P 500, nor do they have an incentive to liquidate their portfolios and sit on their hands when they develop a sizable lead. Whether they crush the market, or lag it, their performance in any given quarter or year will eventually roll off as time passes by. Win or lose, past performance is irrelevant for incentive compensation after three short years.

Buffett pointed out at the 2017 annual shareholders meeting that the two have seen their portfolios grow because he has given them more to invest, and because they effectively “retain their own earnings,” which allows their earnings to compound with the performance of their portfolios. Thus, their long-term records play an indirect role in how much they earn managing Berkshire’s billions.

Besides direct compensation, costs are minimal. Buffett noted in a CNBC interview that Combs has two analysts working underneath him, who are based out of New York. Weschler has an assistant in Charlottesville, VA, where he lives roughly half the week he isn’t in Omaha. Therefore, all-in expenses for research and other purposes are a mere rounding error, given that his two lieutenants manage about $21 billion of capital.

Whether Berkshire’s younger portfolio managers can live up to Buffett’s market-beating record remains to be seen, but Buffett has proven to be almost as reliable at picking managers as he has been at picking stocks. In a now-famous article he penned in 1984 titled “The Superinvestors of Graham-and-Doddsville,” Buffett explained that a small group of investors who he had come to know closely put up performance that topped the index over long careers, thanks to a value-oriented investment framework that Buffett employs for his own stock picking.