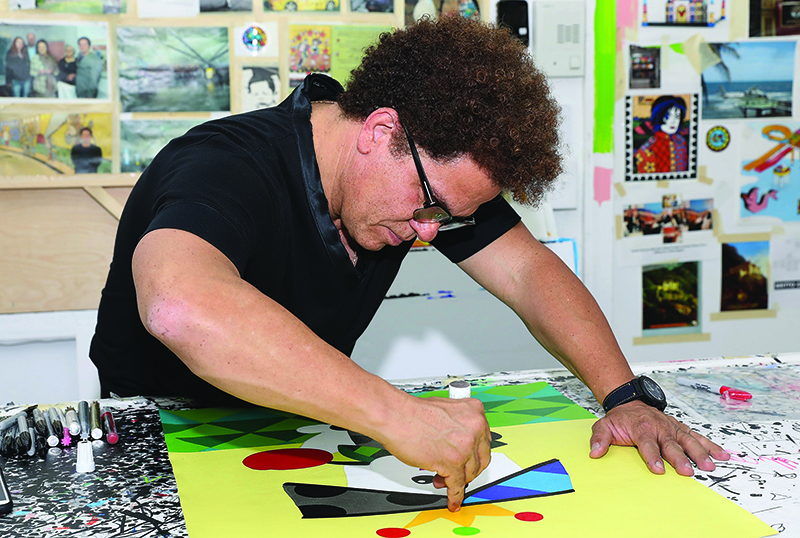 Pop artist Romero Britto was looking to change banks, but instead of going big, he went small. That’s unusual, because nothing about the Brazilian-born, Miami-raised artist’s success is small.

He is known around the world for colorful art that incites smiles. He has built a business empire that appeals to the masses, celebrity collectors and corporate partners, including The Walt Disney Co., the Coca-Cola Co. and Royal Caribbean Cruises.

When it came time to select a bank, Britto said he looked beyond national banks, because he’s an entrepreneur who likes getting things done without red tape.

TotalBank President Jay Pelham met Britto through a mutual friend and client, Jeff Berkowitz, a real estate developer and art collector. Berkowitz has Britto statutes installed at his properties, Fifth and Alton, the Dadeland station shopping center, at his homes, and at his office.

“Anything I needed, they figured it out for me,” Romero says. “A smaller organization, like myself, I make the decisions here, and I’m not waiting to get an OK from all of the people. When I want to do something, I go ahead and do it.”

Britto’s relationship with his bank underscores concern that the number of community banks nationally is dwindling, which makes it difficult for some entrepreneurs to find someone who will meet their particular needs.

“Community banks, we live and die by relationships,” Pelham says.

To get a deep understanding of the nuances of Britto’s business, Pelham visited the artist’s Wynwood studio several times. Britto says Pelham’s visits were fantastic. “That’s different because, a lot of the time, people see numbers and documents, but they don’t see what’s happening in the business. It’s a very unusual business that I do, basically—the arts are not something that everybody does.”

Pelham says, “When you are a community bank, you have to be able to come in to make a custom order. Let’s talk about what you have and need and want. We have an appreciation for someone who has been in this market for a long time—Britto has been here for ages— he’s been here many years and has endured up and down economic cycles.”

Likewise, TotalBank has done business in South Florida for more than 40 years.

“Everything moved so fast with TotalBank, I think because the decision makers were right in front of me and it was so much easier. I met the president of the bank, the key people in the bank. It was fast and easy access,” Romero says.

Britto’s 50,000-square-foot Wynwood studio looks like an extravagant funhouse filled with Britto-adorned merchandise, luggage, dog leashes, figurines made for Disney. Framed photographs of star-studded events—Britto with Elton John, Michael Jackson, the Clinton and Bush families—and thank-you notes from his charitable work line the walls. He’s been involved with more than 250 charities. Music plays where he paints. And his team of a dozen or so manages the e-commerce operations, from orders and packaging to shipping.

With financial services in place that saved time and costs, he’s focused on growth. He plans to outsource his e-commerce operations.

“My business is growing all the time. I just signed a 15-year deal with one of my biggest collectors in the world, Carlos Slim [Helu],” he says. He is Mexico’s wealthiest man with a reported net worth of roughly $67.8 billion.

He recently signed a deal to partner with model-actress Kathy Ireland, he says. He also plans to open more retail stores to sell his line of merchandise, as opposed to an art gallery, in North America and Asia. “I’m going to be doing business in India, more in 2018,” he says.

Britto has created an internationally recognizable brand and has no in-house marketing team. To him, sales are simple, but it’s arguable that his charm helps. “Basically,” he says, “people like what I do and I sell it.” ↵