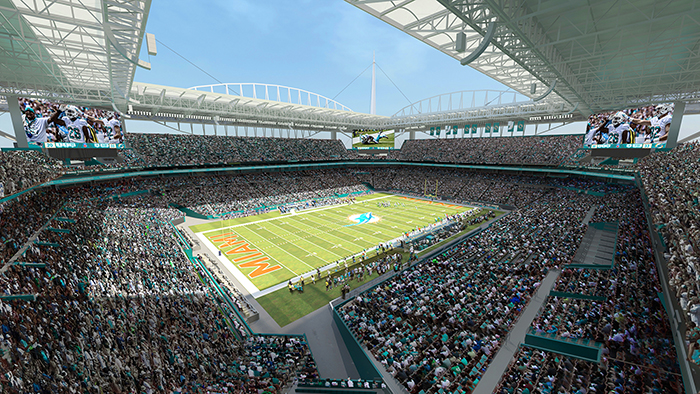 A 60-inch, high-definition TV used to be a $5,000 luxury item, but at $500, more people are tempted to stay home and watch games, he said at a meeting of the Downtown Council of the Greater Fort Lauderdale Chamber of Commerce.

The new stadium experience will start in the parking lot. Pedestrians crossing the street were holding up traffic. But now fans will be able to cross over new pedestrian bridges. That should cut the time to exit to 20 minutes, which means more fans will be comfortable staying to the end of games, Garfinkel says.

Construction work at the stadium started behind the scenes during the 2014 season, and work is now halfway through its first phase.

It will be done by the end of August for the first preseason game, Garfinkel says. “Failure is not an option. We have no where else to play.”

Fans will also find all-new seats, bathrooms, concessions, plumbing and IT infrastructure. And after this season, the team will put on a roof over the seating area and add four new scoreboards.

One reason team owner Stephen Ross is spending $400 million on renovations is to land another Super Bowl in Miami. Garfinkel says the team is pursing the 2013  Super Bowl plus the 2018 and 2019 college national championships.

The team is also putting technology efforts into enhancing player performance, Garfinkel says. Saliva tests are leading to customized shakes for players after practice. Another technology monitors players” number of steps and heart rate as they practice. These can help avoid is soft-tissue issues like pulled hamstrings, Garfinkel says.

A Ph.D. in statistics is doing a lot of analytics work, which can help make better-informed decisions, he says. “I’d vote on the 98 percent outcome instead of the 2 percent outcome.” ?