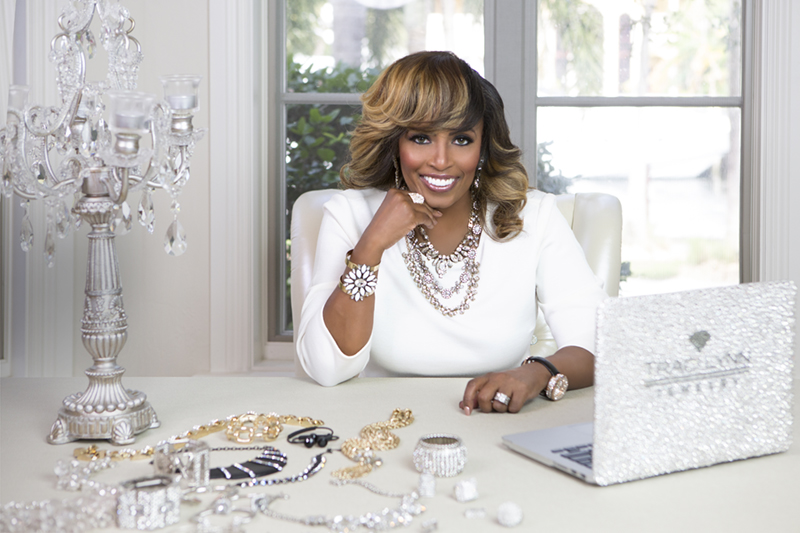 Traci Lynn is one productive entrepreneur. Ask her about what she has accomplished in her career and be prepared to hear an earful. She’s a designer, motivational speaker, author, wife and mother, and she holds a doctorate in theology. And so far in 2017, the founder and CEO of Traci Lynn Jewelry is not slowing down.

With the recent purchase of a 20,000-plus-square-foot office space for $3.4 million, she’s moving her headquarters this spring to an office park near Fort Lauderdale Executive Airport.

Her company sells jewelry online with a network of 35,000 independent sales representatives across the United States and in Canada, Puerto Rico and the Virgin Islands. This year, she plans to hit the United Kingdom and Australian markets. The company hit record revenue in 2016; Lynn declines to say how much other than it’s in the millions of dollars.

In 1989, when she was 25, she founded Traci Lynn Jewelry in Philadelphia with just $200. Within a year, she grew the wholesale business out of her home with a sales training room, she says, and employed more than 1,000 independent sales reps. She kept reinvesting her initial investment, never took out a loan, and grew that $200 into $1 million in sales.

In 1994, Essence magazine called her one of the most innovative entrepreneurs younger than 30. She also appeared on Good Morning America. But a few years later, she decided to fold. She lost her confidence because business colleagues were criticizing her so much that she lost her passion for the business. She calls it the biggest regret of her career.

Traci Lynn has a network of 35,000 independent sales representatives

A move into motivational speaking

“I got chosen at random—he said he could hear it in my voice—and I started traveling with him as his opening act. I had no training,” she says. She just went with it. She worked with him for a year and then went off on her own, also while owning some Rita’s Italian Ice franchises in the Philly area.

In the 1990s, she wanted to go into teaching and earned a doctorate in theology and completed her divinity studies, which led her to the eventual launch of Traci Lynn Ministries. Through this initiative, she visits churches and broadcasts her lectures online.

In 2006, she relaunched her jewelry line as a catalog in Delaware, selling in three states. In 2008, she went national. Since Delaware was mostly a banking state, she moved to the Sunshine State in 2012 for the weather and a place to find her fashionista tribe.

In 2015, she added a handbag line and the next year she added a bridal jewelry collection. This year, she’s rolled out a travel bag collection and a spring/summer collection.

She has also become active in charitable causes. During the past three years, she has raised $300,000 for the American Cancer Society.

Not your typical office space

The new Fort Lauderdale office will feature a theater-style space to accommodate large meetings, a think tank area, a video studio and an in-house photography studio equipped with makeup and dressing rooms. She has a creative team to snap model and product shots to go into catalogs and the brand’s e-commerce shops.

“We will change the walls by the season and match up the clothes accordingly,” she says. “If we want to bring something colorful and funky to the website, we can do that in a matter of an hour.”

Lynn is a huge believer in personal development and contributes this passion to her company’s culture. She hosts weekly live chats on Facebook to stay in touch, swap stories and motivate her sales reps. In addition, she uses video chat to be able to respond to inquiries on-demand. “I call them ‘the force’ because they are powerful,” she says.

The independent sales reps also have Traci Lynn University, a series of 15-minute video tutorials, at their disposal. To join the force, individuals pick a kit composed of jewelry pieces and catalogs, and open an online store. The kits range from $250 (eight to 10 pieces) to $1,000 with more pieces included.

Some of her sales force are high-earning executive women who work with Lynn on the side because of the company’s personal development opportunities.

“The most profitable way we do business is in-home parties,” she says. Even though smartphones keep us constantly wired in, women have a particular desire to sit back and chat. For instance, “wine-down Wednesdays” are a popular home party theme.

Overall, necklaces rake in the most sales.

Each jewelry design has a name and a story. For instance, the Bumble Bee, a bracelet and necklace set from the 2017 spring/summer line, was created on the principle that it was too big to fly.

“It defies the odds. That’s my story. I defy the odds,” she says. “I’ve had failures, I have come back, I’ve risen from the dust like a phoenix. I have endured hardness and toughness, made hard decisions, and even at the end of the year, just like last year, came out on top. Doing the right thing. My core value is integrity and to lead with the heart.”

That knack for leadership and desire to empower others is not only what drives her success, it is a unique characteristic of her business model. She calls it “passing the MIC”—motivate, inspire and change.

Entrepreneurship is in her blood

She credits her grandmother for teaching her about entrepreneurship and the fashion industry. “It all started for me at 4 years old. I went along selling clothes with my grandmother. She purchased from whole sellers,” she says. “They were really big stores, and I would go and hide in the clothes racks.”

She would bounce back and forth, living with her grandmother and single mother.

At 15, she opened a hair salon in one of her mother’s apartments in Detroit, where she lived during high school and college. Her single mother, a nurse, wanted Lynn to become a doctor, but she quickly switched majors from pre-med to business.

In college, she worked at the Vanguard Group, selling investments, but had an itch to work for herself. She said on her lunch breaks she would nap at her desk. “I was bored,” she says.

Early on, after reading a book by cosmetics legend Mary Kay Ash, she learned how to establish a direct sales business. While she didn’t grow up with her father, he coincidentally was a jewelry designer and public speaker, too.

Having made so many accomplishments and living what seems like three lives, Lynn decided to seek balance. “Three years ago, I decided to merge me into me,” she says. “I had too many lives.”

So, she got focused and blended her life, which led her back to doing what she claims she was called to do, to “empower women and people to live their best lives, to motivate, inspire and change lives.”

“It’s my life’s mission,” she says. “It was my mission in life before I started this business.” ↵