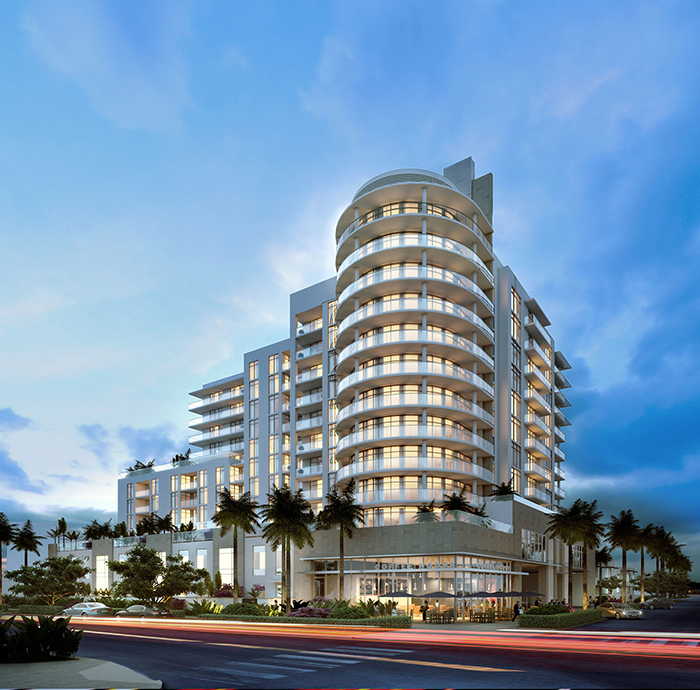 If it seems like there’s a boom in condo construction in Fort Lauderdale, the numbers back it up.

CraneSpotters.com’s Peter Zalewski counted 12 projects in Fort Lauderdale in the first quarter of 2014, but this year, that number hit 40.

The increase is coming as prices have risen in Miami-Dade, where prime waterfront spots are getting harder to find and more expensive.

“Right when Miami-Dade slows down, Broward is on fire,” Zalewski says.

The trend has attracted the attention of top residential brokerage firms in Miami-Dade, which have arrived en masse in Fort Lauderdale to help market the new projects. Redevelopment of midcentury hotels has provided an abundance of sites on the city’s beach.

Several factors are likely to keep the boom in Fort Lauderdale going, says Zalewski, who is giving monthly bus tours of projects in the area after years of doing so in Miami-Dade.

“Even if someone doesn’t know Broward, chances are, they are going to at least take a look because of what they will get pricewise,” Zalewski says.

Broward is still about 20 percent below its 2006 pricing, while Miami-Dade has come back to its peak, he says. “If you believe that, the price can only go up.”

Another boost is coming from new international flights to Fort Lauderdale-Hollywood International Airport from destinations such as Norway, Brazil and Mexico, Zalewski says. “People are getting familiar with the area.”

Zalewski points out that 32 percent of Broward residents are foreign-born compared with 51 percent in Miami-Dade and 23 percent in Palm Beach County. “People buy, and friends and family visit,” he says. “Low and behold, you see that migration spread.”

SFBW asked several major brokers with backgrounds in Miami-Dade County about their perceptions of the activity in Fort Lauderdale.

What is fueling the interest in Broward County?

Cervera: The global market is paying attention to the opportunities in the Fort Lauderdale area. For instance, high-net-worth New Yorkers who want a vacation home compare the prices at beaches in their area with Fort Lauderdale and realize the advantages South Florida offers: beautiful weather and better prices.

Defortuna: Because of a lack of oceanfront sites in Miami as well as the difference in price, buyers are looking north. Fort Lauderdale is a great bargain compared to South Beach and Miami. The city now has great food and beverage options, entertainment and nightlife.

De la Vega: Competitive pricing and exceptional value. In east Broward, waterfront views at a substantially lower price point than Miami-Dade are enticing buyers, while projects like Metropica in west Broward are generating traffic because of the urban lifestyle close to Sawgrass Mills, one of the largest shopping malls in Florida.

Fucci: Buyers are noticing Broward’s incredible resurgence and sophisticated lifestyle. Based on the prices in Miami, they are recognizing the true value of the Fort Lauderdale area with its proximity to all of the major access points – from the international airport to Port Everglades – as well as its great shopping, restaurants and fantastic beaches.

Macken: Comparable inventory at lower prices than Miami-Dade, less congestion and a more laid-back vibe. In addition, there is a general sense of revitalization in the Las Olas and downtown Fort Lauderdale areas.

What is the biggest selling point?

Cervera: Direct oceanfront views with access to pristine beaches, plus proximity to three airports and seaports.

Defortuna: Great value. Then, you couple that with sites such as Auberge Beach Residences & Spa Fort Lauderdale, which is directly on the sand – 4.5 acres placed along 500 linear feet of oceanfront.

Fucci: Fort Lauderdale is very appealing as a big city with small-town charm. Miami is not for everyone; Fort Lauderdale offers the benefits of a major global city in a casual yet sophisticated and vibrant atmosphere. Paramount Fort Lauderdale Beach was the first new development to come out in this cycle, and we’ve really seen a pent-up demand for this type of luxury product.

Macken: A comfortable downtown atmosphere, a mixture of residential opportunities and access to the newly expanded Fort Lauderdale-Hollywood International Airport.

What’s the biggest obstacle to overcome in making a sale?

Cervera: The Fort Lauderdale area has been in a longer sleep since the last cycle and is just awakening. We have to educate the foreign buyers about the opportunities and help them rediscover Fort Lauderdale as a destination.

Defortuna: In terms of foreign buyers fueling the Miami market, the obstacle is distance. Once you show them that Fort Lauderdale is only 30 minutes away from Miami, it doesn’t become that big of an obstacle. The Broward buyer is predominantly from the U.S. or is local. They have been in the area for a while, so it takes time to absorb and motivate these buyers to realize the great value of what they are getting.

De la Vega: Many locals are still surprised by Broward’s rising prices, but the market offers the best deals in South Florida. A $1 million condo in Broward is a better value when you look at the price per square foot relative to Miami and Palm Beach.

Fucci: Explaining exactly what Fort Lauderdale is all about and making sure people know all of the advantages it offers. Most potential buyers are more familiar with Miami and may only know Fort Lauderdale for its previous reputation as the spring break capital.

Macken: Everyone is looking for a deal, and Broward County prices are a “deal� versus what they will pay in Dade. Also, most new construction is cash-only, so it’s a matter of giving up that cash or putting a mortgage in place at closing, and the chance of that happening is slim to none – and slim is dead.

How does the mix of buyers in Broward differ from Miami-Dade County, such as their age and where their primary residence is?

Cervera: The buyers are coming from the Northeast and Midwest of the U.S. and Canada. Buyers are multigenerational – the parents buy and the children are purchasing to be in the same property.

Defortuna: Broward buyers tend to be a little older, however they have an active mentality and live an active lifestyle.

The buyers are mainly U.S. buyers – from the Northeast and some from the Midwest, but primarily local. They tend to be an end-user buyers and will compare more than the Miami buyer. Broward buyers fully consider the amenities, such as a concierge, to make sure that the home truly fits their needs and lifestyle, usually as a primary residence.

De la Vega: A large portion of Broward buyers are locals looking to upgrade or relocate. Many empty nesters choose to purchase a condo with walkability to nearby restaurants and entertainment and with a lot of amenities. In west Broward, we see a younger demographic because of the many corporations within the area.

Fucci: Broward buyers are the true second-home buyers. We see a great interest from people in Canada, the upper Northeast and the Midwest, and people really view their purchases as long-term investments. They do their due diligence so they can enjoy their properties for many years to come.

Macken:  We have an older breed of �young professionals� in Broward versus Miami-Dade. Most of the buyers are local end users, such as empty nesters from the suburbs. Also, the parents of young people attending higher education facilities in the area are buying or assisting in the purchase vs. renting, due to skyrocketing rents.

How well do foreign buyers understand the market, or is it more a case of telling the story of what’s going on in Broward?

Cervera: There is an education process to introduce the Broward market to the foreign buyer.  We are making the foreign buyer aware that strong and prestigious developers are building brand-name and beautiful projects in the area. It is proof to them that new opportunities are emerging.

Defortuna: Foreign buyers certainly need to be told the story of Broward and its comparative pricing. It is still in its infancy. There is a market for foreign buyers in Broward, but certainly not the same foreign market as Miami.

De la Vega: Foreign buyers have always bought in Broward, such as Canadians, but we are now seeing an influx of Brazilians. There are many similarities between east Fort Lauderdale and Rio de Janeiro in the way properties are situated. Every day, there is more interest from foreign buyers moving north in South Florida.

Fucci: Telling the story of what’s going on in Broward is really a focal point when communicating with foreign buyers. OneWorld Properties travels extensively around the globe meeting with many different cultures and potential buyers. We felt it was necessary to create a comprehensive video on the Broward market to showcase its great potential.

Macken: Until recently, the typical response might have been, “What foreign buyers?” The highest percentage of buyers is right here from the USA. This trend was beginning to bend, but as a result of significant downturns in some foreign markets and the degradation of their currencies, that trend has slowed. However, the buyers that are making purchasing decisions in Broward are well-versed in current market conditions. ?