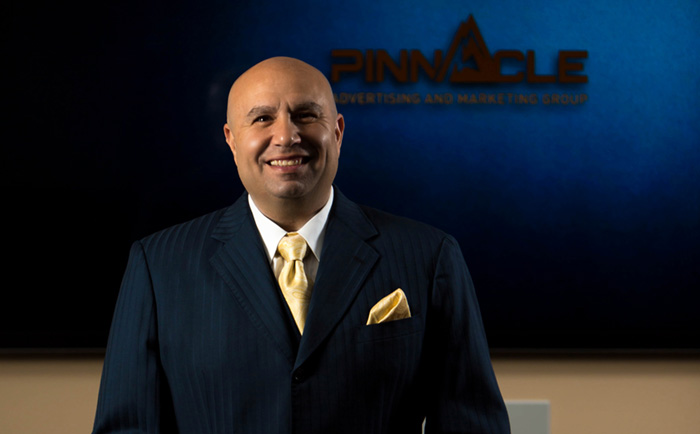 For Peter Gary, it’s all about developing expertise, then leveraging it for success.

After eight years in the Marine Corps, he found himself in automotive retail sales, rising quickly to become the No. 1 Nissan salesman in the country in 1989. He parlayed that into running auto dealerships across the country, including a major South Florida dealership, and to running the sales team for Autobase, an automotive customer relationship management service provider, which he grew from 167 dealers to 3,000 in just five years.

Yet he knew that wasn’t the end.

“I absolutely loved listening to the dealers and what their issues were, and, on the opposite side, what the challenges
were inside the agency to fix the problems the dealers had,” recalls Gary, 52, CEO of Pinnacle Marketing and Advertising Group. “But, as an entrepreneur, I felt that having all your eggs in one portfolio – and just automotive – was limiting yourself.”

In about 2006, he began seeing possibilities for mobile technology.

“I began looking at different ways to market through the internet, not only how people would be doing it, but also what devices they were going to be using. People were carrying a lot more devices they could interact with,” he says.

When marketers remained skeptical, worrying that mobile was too intrusive, Gary embraced it.

He started a company called Mobile Engage – just 15 employees doing about $18 million in business – that allowed him to open people’s eyes. In 2006-07, when advertising dollars were shrinking quickly, Gary was offering clients his digital expertise, and the same return they already were getting at a fraction of what they already were spending.

His knowledge in what was a relatively new field landed him on the board of the Mobile Marketing Association, and, ultimately, to found Pinnacle Marketing and Advertising Group in 2010.

His vision for the Boca Raton company isn’t to be a traditional advertising or marketing shop, but a marketing solution. “It doesn’t matter if you need production, digital, mobile, coding. Everything is done under one roof, so you have consistency going to market, including the vision,” he says. “I truly believed back then that (mobile) was going to change the way we looked at how media buying was done, that it no longer was just three forms of media to buy – radio, print and TV. It was going to be a minimum of seven or eight, with mobile as a specific medium.”

Until then, little marketing had been done directly on mobile applications, and Gary once again took his expertise to his clients. They wanted custom smartphone apps, but they didn’t really know how to use them, he says.

Gary still is building his digital product portfolio. Now in beta testing is Peak Intelligence, designed to offer clients in a wide array of industries endless information, analytics and ways to use them all – no matter their tech savviness. “An eighth-grader will be able to read it,” he says.

Gary says Peak Intelligence will take Pinnacle from 32 employees today to 120 in five years, and boost business from $40 million to $100 million. He expects the philosophy that’s brought him success is what will enable Pinnacle to grow.