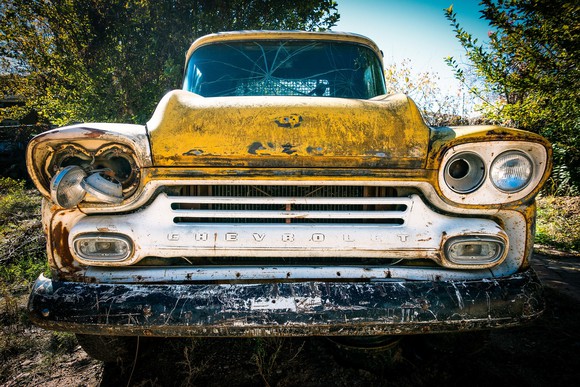 One simple decision to buy a vehicle on the cheap, rather than new, and keep it for a very long time has saved me boatloads of cash.

Let’s just get this out of the way first: I have an ugly, old car. I drove a homeless man across town the other day and before he got in the car he mentioned that it was looking a little dirty. So, you could say it doesn’t exactly impress.

Now, at 234,000 miles, the vehicle still runs, but has some less than endearing quirks. Both the air conditioning and the heater only work in two modes — off and high — and only on the defrost setting, which shoots air up toward the windshield. There’s a rattle coming from under the car that seems to get just a little bit louder when I’m sitting in carpool line to pick up my son, and there are multiple fluids leaking from under the car (message me if you’re interested in purchasing!).

I previously wanted to run this car into the ground before I bought another one, but at this rate I may be the one in the ground before the Altima calls it quits. And as I’ve thought about my next car purchase, I can’t help but think of all the money I’ve saved over the years. By my estimates, I’ve kept an extra $25,000 compared to buying a new car.

When I first bought my Altima, I was in desperate need of some basic transportation. My old car had been ruined in a freak flash flood in front of my house just a month before I was moving away for graduate school. The Altima was in decent shape and the price conveniently was less than the amount the insurance company gave me for my old vehicle.

So paying less than $5,000 was a great deal for a car, particularly one that’s lasted so long. But it’s an even better deal when I compare the average cost of buying a new car at that time. In 2004, the average price of a new car was about $27,000, according to The Wall Street Journal, and the average interest rate around that time was 6.33%, according to WalletHub. If I calculate those two numbers, along with the usual auto loan term of 60 months, I would have paid $30,756 for an average-priced new car.

Of course, many used cars need more maintenance than new cars do, and I’ve had to pay out a handful of times, but not as much as you might think.

Besides the normal maintenance cost of tires, gas, oil changes, etc. (which the new car would have needed, too), I’ve replaced the Altima’s alternator twice, a front brake caliper, the radiator, a vent control valve for the gas tank, the head gasket, and one major $1,200 repair to the engine. I did some of the repairs myself (which saved me some money), and all in all I’ve spent about $2,500 on the repairs.

But that number starts climbing a bit higher when you factor in how much I would have spent in taxes every year for the new vehicle. Where I live, South Carolina, I pay about about 3.3% excluding other fees for my annual vehicle tax, based on my calculations.

CarFax estimates that new cars depreciate on average about 15% to 25% each year, and lose up to 60% of their total value by the fifth year (yikes!). For my calculations, I picked the 15% depreciation rate for both the theoretical new car and my Altima, for simplicity’s sake. The cost of having the new car in South Carolina for 10 years (which is how long I’ve lived in the state) would have cost me about $2,800 in taxes as opposed to the roughly $700 that I’ve paid for the Altima.

Which brings the total savings over the past 12 years to…$25,556. Not bad, considering I didn’t have to do anything extra to save this money other than make one simple decision to buy a used car over an average-priced new one.

Also, I haven’t included how much the new car would be worth right now, compared to the Altima. It would clearly fetch a higher price than my car, but it would be fairly negligible compared to the overall savings (particularly if there were any major repairs done to it over the years).

I wish I could say that I had the foresight to put that extra $25,000 into savings, but I can’t. But I can tell you that not having a monthly car payment for five years helped me to pay off some credit card debt during that time.

I should also say that my wife and I purchased a different used car with cash a few years ago and it didn’t go as well. After a reoccurring engine problem couldn’t be fixed, we had to sell the car at a loss. So, results may vary.

But as the Altima gets closer to that big garage in the sky, I’ll use this experience to apply three things to my next vehicle purchase:

If all goes well, I’ll soon have a good, new-to-me car (with working air conditioning!) that won’t break the bank. Maybe this time around I’ll be a bit smarter and throw some of that extra savings into an account, or invest it. Check back sometime in 2026 to find out how it all went.

Chris Neiger has no position in any stocks mentioned. The Motley Fool has no position in any of the stocks mentioned. Try any of our Foolish newsletter services free for 30 days. We Fools may not all hold the same opinions, but we all believe that considering a diverse range of insights makes us better investors. The Motley Fool has a disclosure policy.