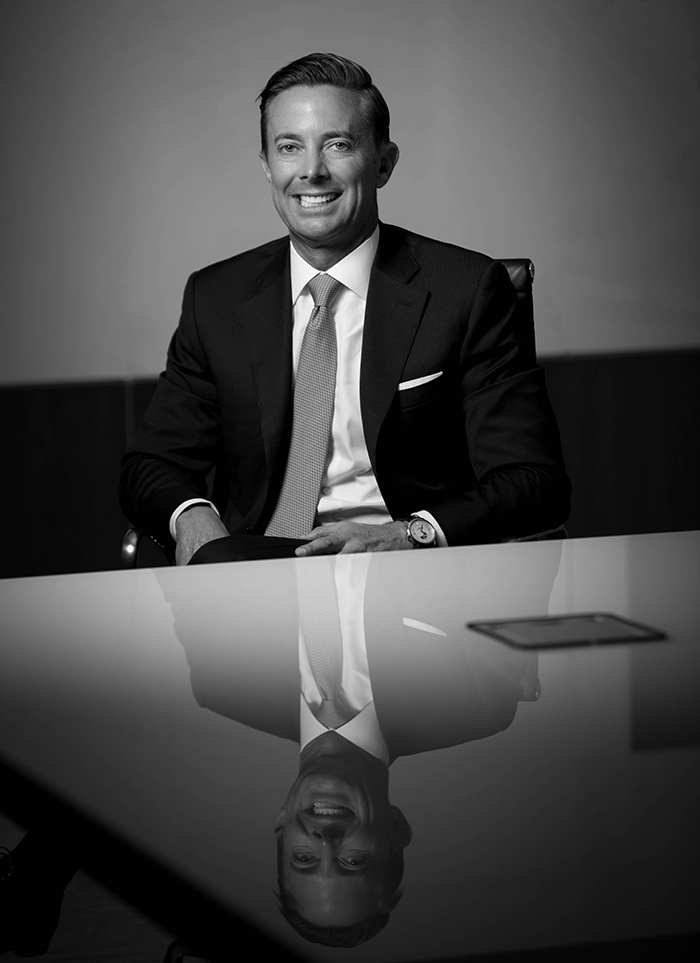 City National Bank of Florida has survived a two-and-a-half-year regulatory gauntlet to close on its deal to be acquired by Chile’s Banco de Cr’dito e Inversiones (Bci). While many institutions tend to lose focus during a sale, the latest quarterly results show City National remains a juggernaut in the South Florida banking scene.

President and CEO Jorge Gonzalez has a positive outlook on the future with a new deep-pockets parent that’s well-respected in Latin American banking circles. What follows is a transcript of an SFBW interview with Gonzalez that has been edited for clarity and brevity.

Congratulations on closing your deal with Bci. What does this mean for City National’s future?

I think it’s a significant opportunity to build a very successful track record. I think it puts us in the enviable position of having a very strong community bank that is going to be supported by one of the most profitable and prominent banks in Latin America. It will position us to continue to invest in people and technology as we move forward.

How many suitors were there for City National and how did Bci get selected?

This is a highly sought-after asset in South Florida. Back in 2013, there were around nine or 10 potential buyers. Many more took a look, but those were serious bidders. In that type of process, it comes down to price and the probability of being able to close and have it approved. You can’t just focus on value. The probability of closure is key – predominantly having approval from the Federal Reserve.

Tell our readers a bit about the philosophy and culture of Bci. I see it is the third-largest privately owned bank in Chile and has picked up a lot of accolades from World Finance, KPMG and PwC.

Even though City National and Bci operate on two distant corners of the globe, there are many similarities. Both are over 60 years old and were founded by families. (City National was founded in South Florida by the Abess family; in Chile, it was the Yarur family.) They were both built on the principles of high levels of service to their clientele, a significant commitment to employees and values of integrity, teamwork, client services and giving back to the community.

When we met Bci early on, one of the things that resonated with me is that our cultures were very similar. A lot of times in acquisitions, people overlook those aspects. They lose sight of the culture and people parts of a merger and that integration is extremely important to the success of the organization. Because the two core principles of the organizations are similar, we thought the marriage piece would work pretty well.

How will City National work with the long-standing Bci branch in Miami?

The Bci Miami branch is primarily focused on international private banking and trade finance. There will be some opportunities to leverage off each other, but the businesses are distinct and separate; there is not going to be integration per se.

You have picked up a lot of personal accolades for your leadership of the bank, and City National is often cited as having a great corporate culture. What are the attributes you try to stress as a leader and what makes the culture of your bank strong?

I’m a big believer that when you surround yourself with good people, good things happen. We focus on making sure our employees are supported and recognized. At the end of the day, they are our most important aspect. Few companies live by those words.

Tell us about the characteristics of the people working at City National?

We look for people of high integrity who have high ambition, work as a team and aren’t cowboys. We like people who have a track record, who are committed to organizations. People who have a tendency to jump around aren’t high on our list.

What are some adjectives you would use to describe yourself?

How do you balance being a leader vs. being a micromanager?

I think there are times for both. I think you have to micromanage to the point where you understand the business and where people in their respective roles have a good framework for management, but then you have to let people do their jobs. You have to be able to fly at a somewhat higher altitude.

How were you able to maintain focus and grow tangible net worth by 30 percent from the time the deal was announced to the time of closing?

I really owe that to our employees. Three years ago, when we decided to sell City National, I held multiple town halls. I looked all our employees in the eye and said if we stayed focused on what we can control and take care of our clients and one another, we would have a good outcome. Most institutions that go through a sale process have a tendency to become very distracted, but our folks kept their heads down and stayed focused on the key principles of our business.

Where do you see future growth coming from at City National?

There are gaps in our product offerings, one of which is a wealth management business. We offer our private clients customer core banking, but we think investment management and trust services are something we can bring to the table. We can also do some leasing. That is a product highly utilized in corporate banking.

We are looking at doing some trade finance. If you look at Bci headquartered in Chile and City National in Florida, much of that trade flows from here to Latin America. We think there is a role to help finance some of that trade.

I think most of the expansion will come in hiring more people and investing in technology. We are a $6 billion bank, but have less than 2 percent market share in Miami-Dade and less than 1 percent in Broward and Palm Beach. There is so much we can do to expand under our feet. Banks have a tendency to do too much at one time. Our approach has been: Let’s pick two or three things we can do very well. Let’s be good at that. All the minutiae we can prioritize for a later time.

How do you manage strong growth while maintaining your five-star superior rating with Bauer Financial?

Is there a danger that some banks aren’t heeding the lessons learned during the recession and the banking crisis in the late 1980s and early 1990s?

I think there are some signs of that. But I also believe the regulators this time around are going to be very proactive in putting the brakes on the institutions that lose sight of their risk management discipline. As costly as it is for our industry, I think it creates an equal playing field so banks don’t take unnecessary risks.

There’s a common complaint heard around the industry about over-regulation. I understand the origination of that, but I think there is a need to create governance, particularly on the asset quality side, to prevent banks from chasing on another off the cliff.

Are we going to see more consolidation of community banks in South Florida, given the cost of regulatory overhead these days, and are you kicking the tires on potential acquisitions?

We just went from being one of the banks with the most uncertainty to one of the banks with the most certainty. It’s a nice feeling because in the last two-and-a-half years, we have been fighting off the recruiters and rumor mills. Now, I can easily point to three or four organizations that will be acquired or merging in the next 18 to 24 months. There will continue to be consolidation and fewer banking jobs. You need a scale to have a return on capital.

There’s been some comment in the media that the condo market is starting to cool in Miami. What are you seeing and what does that mean for the broader economy?

A lot of the projects that were planned for the next two or three years won’t come out of the ground. Because some of the Latin American money has slowed up, it will allow a more disciplined construction to take place. If we kept growing at the place we were growing, it would not be healthy. ?

Born and raised in Miami, Jorge Gonzalez was the son of Cuban immigrants who moved to the U.S. in the 1950s. His father was a professional jai alai player who played for 23 years and later worked at PepsiCo; his mother worked in the loan operations area at City National.

“My mom worked at City National for over 20 years,” Gonzalez says. “She retired five or six years before I got here. I remember sitting at the dinner table and hearing her talk about City National Bank. It was ironic that I ended up running the company that my mom was employed by.”

Gonzalez had an interest in business growing up and gained a degree in finance and international business at FIU. He thought he would be a lawyer, but wanted work experience first and entered a bank training program in the late 1980s. “I liked that banking exposed you to so many different types of people, managements and philosophies,” he says.

Except for three years spent in Texas in the early “90s when Florida was recovering from a bank crisis, Gonzalez has spent his career in South Florida. He started in 1988 at Southeast Bank and spent 20 years with Wachovia and its predecessor banks.

Gonzalez was regional president of Wachovia for Southeast Florida when he joined City National. He admired City National CEO Leonard Abess (whose father founded City National) and it became apparent that a new management team would be needed when Abess decided to sell the bank.

In November 2008, Abess sold City National for $927 million to Caja Madrid and was recognized by President Obama at a State of the Union address for sharing $60 million of the proceeds with bank employees. Wells Fargo acquired Wachovia that December and Gonzalez joined City National the next month.

“Had those not been parallel, I would have probably stayed at Wachovia the rest of my career,” Gonzalez says. “It wasn’t easy to leave a 20-year job.”

Gonzalez was City National’s president while Abess remained CEO for about a year and a half before Gonzalez assumed both titles. “There were many long-standing relationships that had close connectivity to Leonard, and he did an excellent job of transitioning as much goodwill as possible to myself and the management team,” Gonzalez says.

City National has grown its assets about 142 percent to $6.2 billion since Gonzalez joined.

It was a “very large friends-and-family bank” that dealt with a small group of influential people and had a heavy commercial real estate clientele, Gonzalez says. He diversified the bank with more clients in different types of businesses.

“We had to hire a lot of people. We had to rework the technology of the bank and expand the product offering,” he says. “This institution today – even though it’s true to its core beginnings – is a vastly different organization than it was eight or nine years ago.”

Gonzalez has plenty to keep him busy beyond the office. He and his wife, Melinda, whom he appreciates for putting up with a lot of sacrifices when he’s away, have 10-year-old twins, Jordan and Ella. “My son wants to be a banker and professional basketball player at the same time,” Gonzalez quips, “and my daughter is going to be king of the world.”