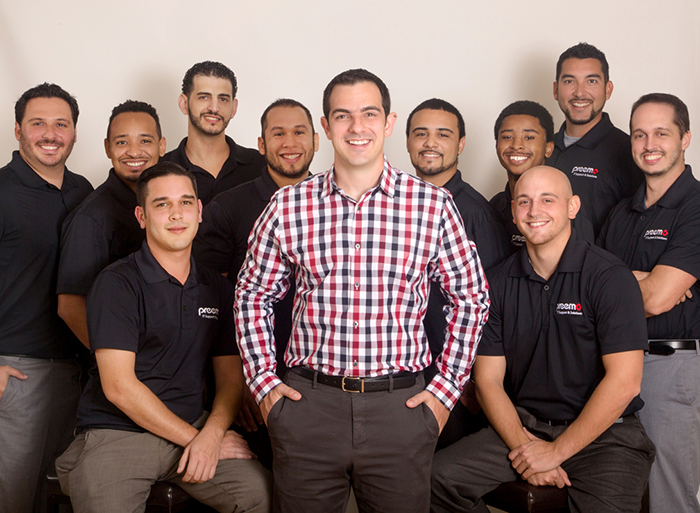 It was quite a surprise to Preemo and TechBar founder Ivan Mladenovic when he became one of three company owners selected from more than 8,000 applicants to receive advice from legendary business expert Barbara Corcoran at the Entrepreneur Magazine Growth Conference in February.

An avid fan of Shark Tank who made it to the show’s last interview phase, Mladenovic had one key question for Corcoran: Should I franchise my business? It’s quite an impressive question to have just six years after starting his IT consulting firm and technology repair business at his kitchen table.

“Initially, fixing computers was something I did while I was figuring myself out,” says Mladenovic, who graduated from the University of Miami in 2006 and spent the next two years working in the film and talent industry in Los Angeles.

After realizing that the industry wasn’t for him, Mladenovic returned to where he had been raised since his parents emigrated from Serbia when he was three-years-old: South Miami. South Florida is a long-time comfort zone for him – he attained “lifer” status at Gulliver Academy and Gulliver Preparatory School, which he attended from kindergarten through twelfth grade.

“After a while, I realized that I was doing a lot more than just paying rent by having the business,” he says. “And then it snowballed. I found that I really enjoyed managing my own business. So I had found what I really want to do.”

Now Mladenovic has 11 employees with offices for Preemo and a TechBar store in South Miami, and another TechBar store in Key Biscayne. Preemo has been voted one of the Top 3 IT Consulting Firms & Cloud IT Companies in South Florida by the Daily Business Review for the past three years, and serves more than 130 clients in South Florida, with daily IT support, server management, proactive maintenance, and business continuity services.

The company employs two honorably discharged veterans and was recently honored as a Patriotic Employer by the Office of the Secretary of Defense.

For TechBar, which repairs devices like phones and tablets, Mladenovic is actively seeking store locations in Aventura/North Beach and Broward County. And since getting the green light from Corcoran to franchise, he is expanding the store’s concept to offer franchise opportunities. While the idea of a technology repair business is not necessarily unique, apparently Mladenovic’s approach to it is.

“It centers on finding the right people to work for you. It’s critical,” he says. “Many in the industry are very qualified, have the right certifications and keep getting more – but they can’t communicate with clients. It’s a personality thing. You can get certificates but you can’t be taught to be nice. That’s something mom should have taught you.”

Hiring staff who are not only qualified at what they do but also have empathy for client issues and know how to work well with them is key in an industry where business is awarded and kept on trust and credibility, he adds. To do it, Mladenovic created a survey for job candidates to take that specifically addresses necessary hard and soft skill sets. After taking it successfully, candidates must then be interviewed by a panel comprising employees who would be working with them, and then finally vetted by Mladenovic.

“Everyone who works for me has a unique skill but also works well as part of a team. They need to be hyper-motivated,” he says, adding that all must obtain a new certification every year.

Mladenovic also says his company culture is one of “connectedness” to the community it serves with special regard for charitable causes that are important to his employees. Donating both time and money, Preemo and TechBar actively support The Arthritis Foundation, All Angels Academy, Key Biscayne Community Foundation, Miami Foundation, Miami Children’s Initiative, Charity: Water, and Novak Djokovic Foundation.

He attributes his love of business networking and working with all kinds of companies to his upbringing.

“I grew up in a house where we were always having people over for dinner,” he says. “I love to meet new people.”

Mladenovic especially credits his parents as mentors for his business savvy that values and utilizes feedback from those who are experienced – and credits a South Florida retail icon for his considerable sales skills: Sound Advice. His first job was in commission-based sales for the company’s Pinecrest store.

“That’s where I learned to sell – the ABC way: Always Be Closing,” says Mladenovic who now mentors Gulliver students in the school’s entrepreneurship program. “It may sound old school, but it works.” ?

Little Known Fact: He can perform magic tricks and make balloon animals. If you ask him nicely, he just might make a cameo at your kid’s birthday party if you’re willing to pay Preemo’s emergency, double overtime weekend rate.