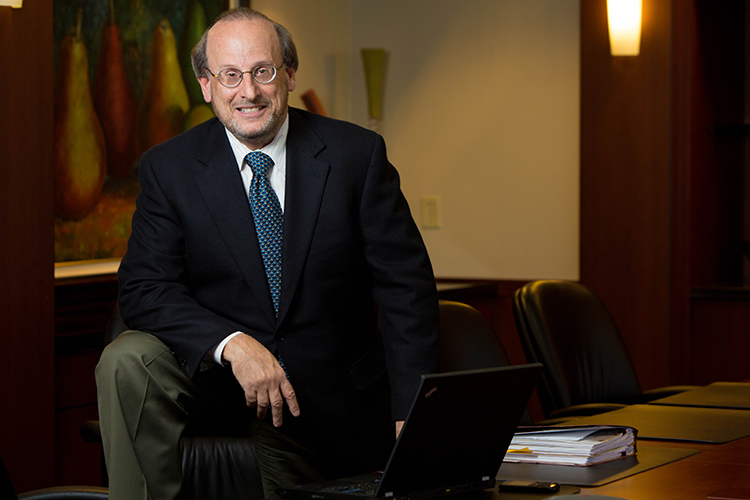 There’s a big trend of talent from the Northeast flowing into South Florida, but attorney Michael W. Moskowitz is ahead of the curve by 35 years.

He was a federal attorney in Washington, D.C, and two years out of Brooklyn Law School when he came in 1979 to visit his parents in South Florida. He sent out 30 resumes in the area, mainly with the goal of deducting his trip as a business expense. He was shocked when he got 20 invites to interviews. He ended up getting four offers and then a fifth when he arrived home.

“I concluded that Florida had great opportunities,” he says. And how.

Moskowitz, who handed out fliers for John F. Kennedy as a child in Brooklyn, is an accomplished attorney and one of the most prominent figures in state politics. Moskowitz has been a state Democratic committeeman and recently hosted Vice President Joseph Biden for a fundraiser at his home.

Perhaps, most notably, Moskowitz was the lead counsel in Broward County for presidential candidate Al Gore in his 2000 recount against George W.  Bush. Moskowitz proudly notes that a team effort and working over Thanksgiving resulted in the recount being completed. That’s in contrast to the effort in neighboring Miami-Dade County where the Brooks Brothers Riot led to a shut down in recounting 10,750 votes.

Moskowitz is also the father of Jared Moskowitz, who is a member of the Florida House of Representatives.

Beyond the world of politics, Mike Moskowitz has a reputation as a tough, successful litigator, serving as head of the commercial litigation department at Moskowitz Mandell Salim & Simowitz in Fort Lauderdale.

Prominent attorney Mitchell W. Berger of Berger Singerman describes Moskowitz as tough, trustworthy and loyal with a big heart. (Moskowitz has been a major fundraiser for Jewish causes and says his two most proud legal moments were pro bono adoptions.)

When he tapped Moskowitz, Berger says he was “looking for someone who was exceptionally gifted and applied those gifts to perseverance in a very difficult situation.”

There are plenty of news accounts of challenging lobbying efforts and tough legal situations Moskowitz has handled over the years. In a prominent case in 2014, Moskowitz successfully obtained a $21.6 million verdict for property developer Mordechai Boaziz after a five-year legal saga.

Beyond all the attributes Berger uses, Moskowitz is a self-professed six-day-a-week workaholic. On a typical day, he gets out of bed at 5 a.m., grabs a cup of coffee and works at home for the first three hours. He gets in the office a little after 9 a.m. and works until about 7 p.m. After dinner, he usually puts in a couple more hours.

Moskowitz’s wife, Marilyn, undoubtedly knew what she was getting into since she used to be a paralegal at the law firm.

Moskowitz jokes about what a client said at a celebratory dinner after a legal victory: “You know what I’m going to be most happy about is I no longer will get 4:30 a.m. emails from Mike Moskowitz.”

Like most accomplished business people, Moskowitz says he enjoys his work. “I wanted to be a lawyer since the third grade. I’m doing what I dreamed to do.” ?