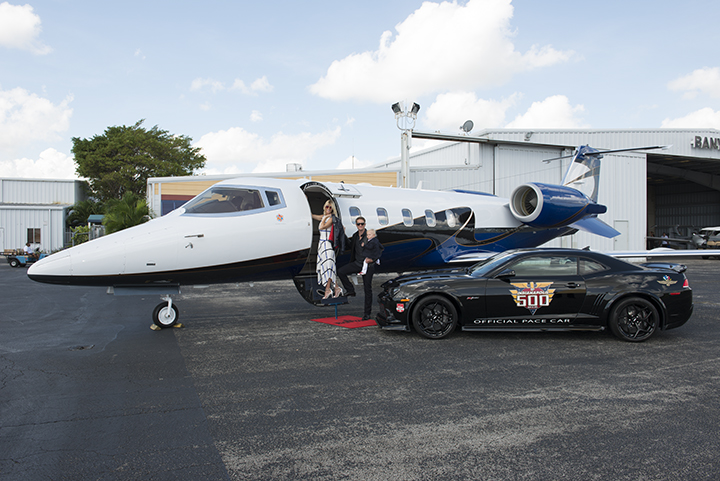 Life in the Fast Lane

He may be the reigning Indy 500 champion, but Ryan Hunter-Reay has only one thing on his mind at the moment – not waking toddler son Ryden from the ever-important afternoon nap. “Sorry I’m whispering,” he says, “the baby is sleeping.”

This level of normalcy from the Fort Lauderdale native is exactly what makes him so endearing to his legions of fans. But life for Hunter-Reay will soon be anything but normal; he is becoming more recognizable by the day.

“It’s amazing how much one race can change your life,” says Hunter-Reay.

His new schedule involves daily sponsor appearances, team commitments, and media obligations.  Last month, his wife Beccy and he attended  the ESPY awards (where Hunter-Reay won Best Driver) and hobnobbed with the top athletes in the world.

“All those guys have one thing in common – they all really like fast cars.  When they get to talking to me it’s a pretty interesting conversation,” he says.

Hunter-Reay even landed a spot on “The David Letterman Show,” which was a reunion of sorts as Letterman was part owner of Hunter-Reay’s first team. “It was really cool,” he says of the Letterman experience, “I know how much he loved that race, you could see it in his eyes.”

Pressure at the top

But parties and fame are certainly not what dominate Hunter-Reay’s life, rather, his focus is on hard work and responsibility.

“It’s a pretty intense and pressure-packed career,” he says. He feels the demands of carrying a whole team on his back saying, “There is a lot of corporate money involved. Just like business, people want results and they deserve them. When the results do come, it’s an amazing feeling of relief – even sometimes more so than the celebration.”

Not that he’s complaining.

“I wouldn’t want it any other way,” he says. Hunter-Reay feels he was born to race and jokes that, “It doesn’t even feel right that I should get paid to race cars as fast as I possibly can, but that’s the reality of it and I’m certainly enjoying it.”

Luckily, he has Beccy by his side on this wild journey, and she is as immersed in racing as one can be. An off-road racer herself, Beccy’s great-grandfather, father, mother, sister, and brother are all drivers.

“She gets how the sport works and she gets the fact that it’s a year-round job. We don’t come back from a race and go on a long vacation,” Hunter-Reay says of his wife. “She understands the toll it takes on me.”

“Finally, Ryan is getting the recognition that he deserves, that he’s been fighting so hard for four years,” she says. Nevertheless, she sometimes wishes her familiarity with the sport were a bit less intimate since other wives might not worry so much.

“I get it all the way down to the things that most people don’t understand. Sometimes I feel like I know too much,” she says.

The racing couple live in Fort Lauderdale, where Ryan was raised, and he says the encouragement from this community means more to him than all the awards in the world.

“I am and have been so proud of growing up here and still being a resident here. It’s great to see the recognition this area has given me, the local support, it almost means more than anything,” he says.

When Hunter-Reay returned from  the Indy 500, he was given a key to the city, was at the center of a “huge” victory party thrown by Global Wealth Management, and even had a day named after him. Global Wealth Management’s co-owners Andrew Costa and Grant Conness are close friends of Hunter-Reay, having attended Cardinal Gibbons High School together. Costa and Hunter-Reay go as far back as Pre-K and he was even Hunter-Reay’s best man at his wedding. The GWM duo have been managing Hunter-Reay’s finances for years – “and doing an exceptional job,” says Hunter-Reay. “I’m very appreciative of the Indy 500 victory celebration they put together at Vibe.”

AutoNation and DHL – two of Hunter-Reay’s big supporters, threw a large celebration as well. Hunter-Reay thoroughly enjoyed the festivities and the support, saying, “The IndyCar season is literally non-stop, so we never actually had the opportunity to celebrate this massive achievement until these events months after the big win.” He even feels South Florida traffic prepared him for the racetrack, saying, “I-95 rush hour is harder than any Indy 500!”

Growing up in Broward, Hunter-Reay attended Pinecrest Elementary and Middle School, then graduated from Cardinal Gibbons High School. He explains that the school’s support of his dream allowed him to succeed. He worked with Principal Paul D. Ott (who is still there today) to create a flexible schedule that allowed him to travel for his races as long as he made up his homework and tests.

“I am forever grateful to them because they allowed me to pursue racing – a sport that’s not recognized as a school sport. It was kind of going out on a limb,” he says.

The life of the Hunter-Reays is not all about fast cars, though. They dedicate much of their time to the “Racing for Cancer” foundation. Hunter-Reay launched the foundation in honor of his mother who died of colon cancer in 2009. They’ve raised $2 million to date, with a top priority of educating people to get checked early as well as a “massive project” in the works.

Though they’re not announcing the details yet, Hunter-Reay says it involves creating a comprehensive cancer treatment center in South Florida. He says, “It was very important to me for all these fundraising efforts to have a major impact in the fight against cancer and to also have that impact in South Florida.”

Hunter-Reay is so dedicated to the cause that he wears the number 28 in honor of the estimated 28 million people fighting cancer worldwide.

In their (limited) downtime, Hunter-Reay and his wife enjoy neighborhood haunts like S3, Caffe Europa, Coconuts, and Southport Raw Bar, where Hunter-Reay has been going since he was little. But mostly, they love spending time with Ryden and heading out on their boat.

Hunter-Reay is an avid fisherman and free diver, which he says is, “the only thing I do away from the race track that completely zones me out and gets me in a spot where I’m not thinking about racing.”

They also have fun running into friends at birthday parties, such as the guy who came within inches of beating Hunter-Reay at the Indy 500 – fellow Fort Lauderdale resident H�lio Castroneves.

“We have a massive amount of respect for each other,” Hunter-Reay says of Castroneves. “When we were inches apart at 230 miles per hour, that’s only because of the driver he is as well.”

As to the future, Hunter-Reay is looking forward to the little things, like, “when Ryden can finally wash the boat for me – that will be a great moment,” he jokes. Whether or not little Ryden will follow in his parents” footsteps remains to be seen, but Beccy would prefer he go in a different direction.

“Oh gosh, I’d really like him to be a golfer. … I’m not joking” she says. “I love racing and everything about it, but it’s stressful.”

For the time being, all eyes are still focused on Hunter-Reay in the driver’s seat.

“I’d like to race cars as long as I can and, God willing, I am healthy enough to do it,” he says. After all, he points out, “I’m only 33 so hopefully I still have a long career ahead of me.” ?