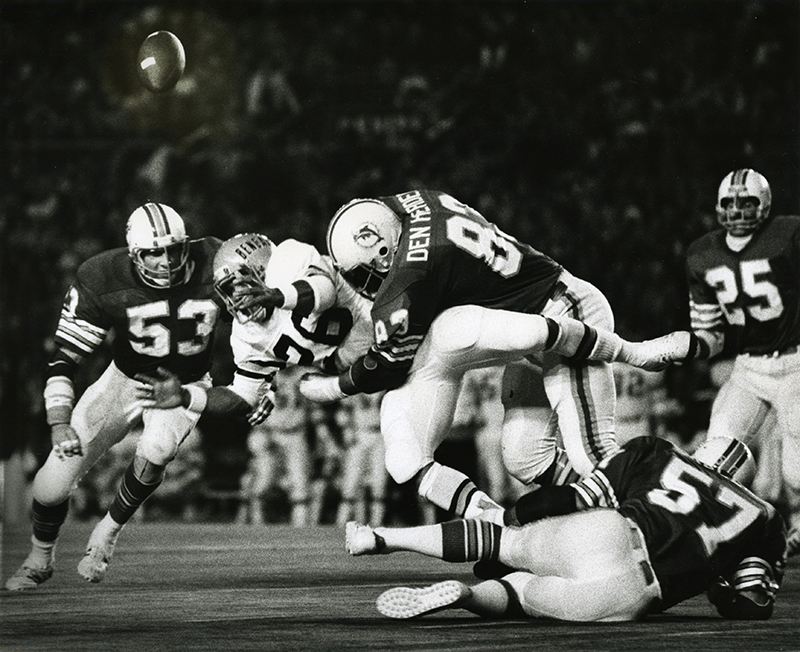 With football season underway, it’s a good time to consider the history of one of the sport’s iconic teams—the Miami Dolphins. They grew rapidly during their first six years, laying the foundation for their time-honored reputation.

In 1966, their inaugural season in the American Football League, the Dolphins held training camp in St. Petersburg Beach with a total of 83 athletes. They opened the regular season with a loss to Oakland at the Orange Bowl, with running back Joe Auer scoring their first touchdown. The Dolphins finished the season with a 3-11 record.

Next year wasn’t much better. They went 4-10 but set a single-game attendance record (68,125) when they played Baltimore. In 1968, they went 5-8-1, with quarterback Bob Griese, running back Jim Kiick and wide receiver Karl Noonan named to the AFL All-Star Team.

1969 brought the announcement of a merger between the AFL and the National Football League, effective the following season. The Dolphins went 3-10-1 and fired coach George Wilson. Both events set the stage for major changes. New coach Don Shula—who famously said, “The only way I know to win is through hard work”—led the team to a 10-4 record, and its first playoff appearance, in 1970.

Success accelerated. The Dolphins went 10-3-1 in 1971, ranking first in rushing offense and fourth in overall offense, and reached Super Bowl VI. They lost to Dallas, but seven players were named to the Pro Bowl—ultimately laying the groundwork for the historic 1972 season, in which the Dolphins posted a perfect record and won a Super Bowl title.

The Dolphins’ first six years clearly were formative, particularly under Shula, who made strategic player trades to achieve success. “The one thing I know is that you win with good people,” he said. With that time mind, here’s hoping the 2017 season is another one for the books. ↵