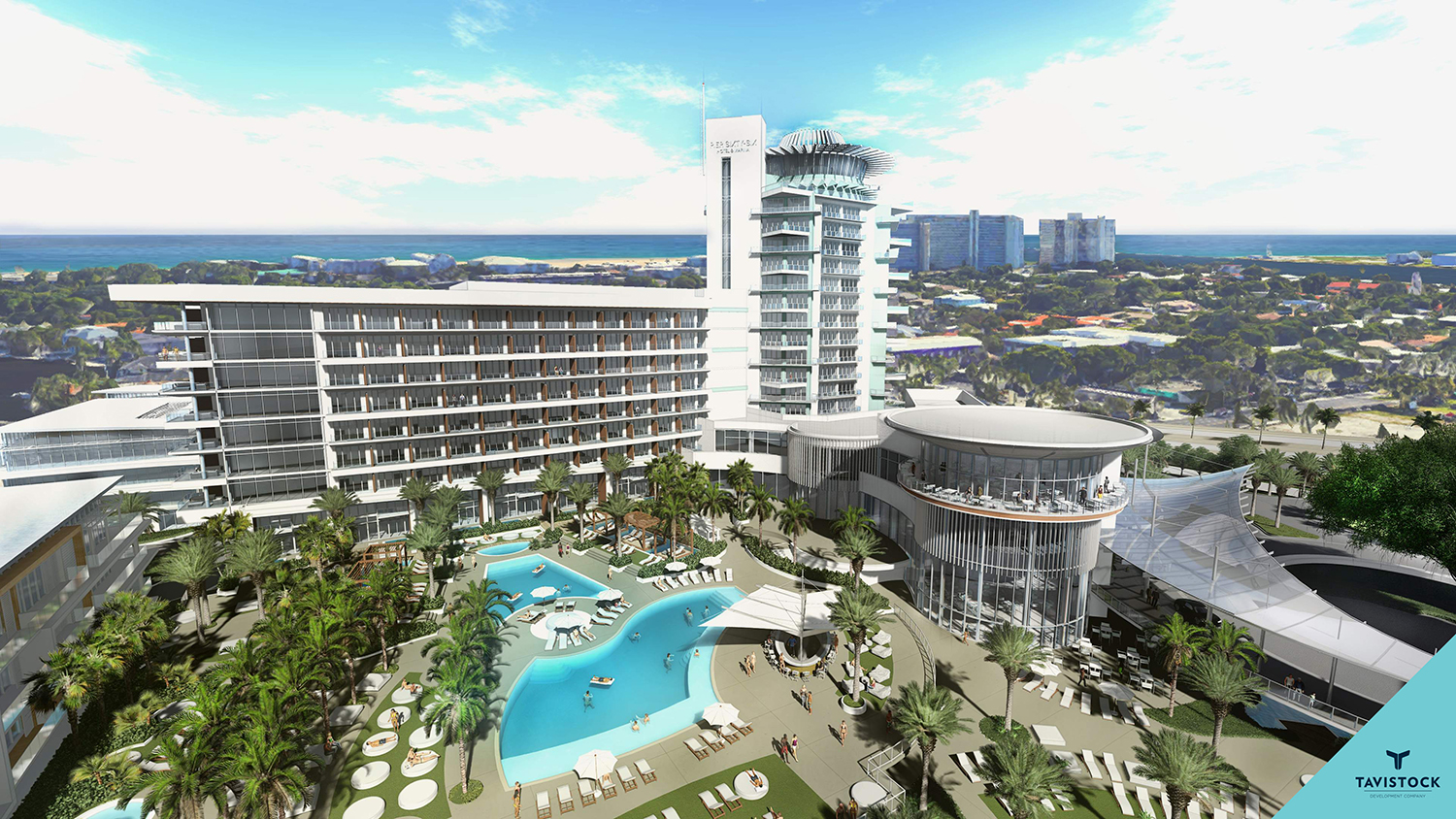 Fort Lauderdale’s iconic Pier Sixty-Six Hotel has closed for a two-year, half-billion dollar renovation that will fix the damaged hotel and transform the 22-acre property.

Owner Tavistock Group says the property will have:

To longtime fans of the hotel, there’s one welcomed throwback twist: The Pier Top will once again be a revolving rooftop lounge after being used in recent years as a special events space.

Tavistock paid $163 million for Pier Sixty-Six property in December 2016 and the following July paid $24 million for the 10-acre site of the former The Sails Hotel Marina & Shops, which is on the south side of the 17th Street Causeway. That site, which was cleared by a previous owner, will be developed sometime in the future.

All of this might seem like a gigantic project, but Tavistock has investments in 200 companies in 13 nation. It is developing a 17-square-mile community called Lake Nona near Orlando International Airport. This is Tavistock’s first real estate project in South Florida, but it owns the Timpano Italian Chophouse on Las Olas Boulevard and the Abe and Louie’s Steakhouse in Boca Raton.

By mid-June, the Pier Sixty-Six hotel had closed with expectations of site preparation beginning over the summer, said Tavistock’s vice president of communications, Jessi Blakley, who grew up in the Rio Vista neighborhood near the hotel. The hope is construction will begin by the end of the year.

The hotel’s marina and Pelican Landing and Grille 66 restaurants will remain open during the renovation.

The hotel tower, which has 150 rooms, was heavily damaged by Hurricane Irma in 2017. The hurricane took off part of the tower’s roof and water went down the center of the building, Blakley said. The Pier Top and ballrooms reopened, but the hotel rooms in the tower have remained closed.

The project will keep the iconic look and feel of the spired hotel tower, which is a prominent example of midcentury modern architecture. One tweak, though, will put glass on the upper portion of the room balconies so guests can more easily enjoy the views.

Some of the changes on the property will be welcomed by people who attend numerous events at the hotel. One issue is, traffic arriving at the hotel can back up onto the 17th Street Causeway bridge. The new arrival design will encircle a banyan tree on the property and offer four lanes where traffic can be stacked to minimize backups. The two condominium towers will have three stories of parking with landscaping on the roof between them. Three floors of parking on the marina side will be wrapped with 32,000-square feet of retail and office space. The result will be major aesthetic upgrades over the old design’s sprawling asphalt parking lots.

Pier Sixty-Six will provide plenty of opportunities for residents to enjoy a resort lifestyle.

Pricing hasn’t been set, given that the project will take a few years to complete, Blakley said.

A new waterfront promenade will connect the properties on the north side and south side of the causeway. Until Pier Sixty-Six South is developed, Tavistock plans to use it as a waterfront indoor-outdoor recreational venue that could include farmers markets, art exhibits and musical performances. It was already used as the Superyacht Village during the Fort Lauderdale International Boat Show.

The overall project is being billed as “Fort Lauderdale’s Social Harbor” and received considerable input from its neighbors, Blakley said. Their input has helped develop ideas to relocate mature trees and block views of the construction site from the neighboring single-family homes.

The Pier Sixty-Six south property came with entitlements to build a hotel, but Blakley said that doesn’t make sense now, with Tavistock having substantial hotel operations on the north side. Tavistock believes it can create a better plan, perhaps with more residences and shops, she said. “We’re just so excited this project is moving forward. The fact that we did it together with the community with their full support was really important. Revitalization of this icon is so significant.” ♦