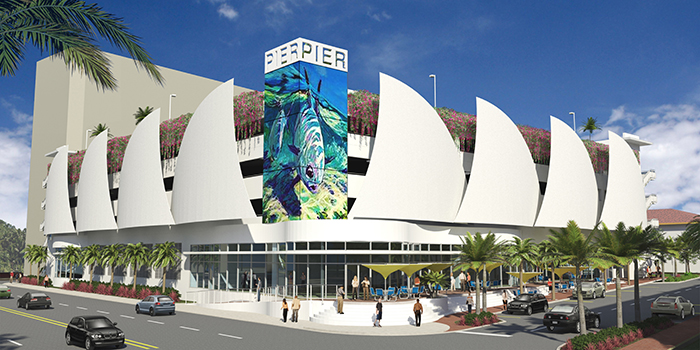 Pompano Beach has long been a mecca for retirees and, thanks to its vast industrial areas near I-95, a major regional center of employment. What it hasn’t been is a hot, trendy place – but that’s changing.

The city is exploding with a remade public beach, a new streetscape along Atlantic Boulevard, chic places to live, including Sabbia Beach Condos and Koi Residences and Marina, a trio of new cultural facilities and, yes, hip places to drink and dine.

Pompano already has some popular hangouts, such as Houston’s, Cafe Maxx and Briny Irish Pub, but residents such as Lauren Fyke, who moved there in 2007, say the city is now attracting a younger crowd of visitors and residents. “For years, I heard rumors of a resurgence coming to Pompano Beach, and I am thrilled to witness these developments coming to fruition,” she says. “New bars, restaurants and breweries are bringing new life to our town, keeping it competitive with our neighbors to the north and south. I am a particular fan of the Rusty Hook Tavern, McCoy’s Oceanfront and the brand-new 26″ Brewing Co.”

The Foundry, an upscale casual restaurant with oak-grilled meat and 16 craft beers, was expected to open by Dec. 1.

To get further insight on how the changes are unfolding, SFBW participated in a panel discussion with key stakeholders in the community redevelopment association (CRA) offices in City Hall on Atlantic Boulevard. Next door, a new library and cultural center is coming out of the ground, while the city’s previously neglected historic downtown, just to the west, has a new streetscape and a renovated hotel with an art gallery and spaces for artists to work.

The discussion was organized with the help of Kim Briesemeister, a principal with Redevelopment Management Associates (RMA), which has a contract to run the CRA.

Pompano Beach seems to be following the model of Delray Beach, which recently underwent a similar transformation with the help of RMA partner Chris Brown.

Pompano Beach is currently in year seven of its transformation process, which began after city leaders realized the need for action, Briesemeister says.

One area of focus was the long-stalled redevelopment of the oceanfront, where the city owned a parking lot next to the Pompano Beach Fishing Pier. RMA told the city that in order to attract private investors, it needed to invest public money, so $12 million was invested in a new streetscape, lighting, a playground and exercise equipment along Pompano Beach Boulevard. This year, the city commission also approved a $19 million, 600-plus-space parking garage being built by Kaufman Lynn Construction, which will include sail designs on its exterior plus ground-floor shops and restaurants.

New Urban Communities of Delray Beach, led by Kevin Rickard and Tim Hernandez, formed Pompano Pier Associates and gained the rights from the city to create the Pompano Pier Fishing Village, plans for which include 48,000 square feet of retail and restaurant space on six acres.

Brimstone WFG Holding Company, which was profiled in the April 2015 issue of SFBW as the owner of Brimstone Woodfire Grill in Pembroke Pines, Piñon Grill in Boca Raton and Grill 401 in Fort Lauderdale, will open Pompano Beach House in the fishing village, while North Carolina’s LM Restaurants will open Oceanic Oceanfront Dining, an upscale seafood restaurant.

Rickard says Pompano Beach had a stigma when he first started marketing the site in 2010, but LMR leaders were amazed when they came down for a site visit and saw the revitalized beach. He expects construction to begin in the first quarter of 2016, with openings starting by Thanksgiving 2016. A promenade will run from the fishing village to the Intracoastal Waterway.

Other projects are popping up, too. Developer Dev Motwani has acquired a 5.8-acre site that straddles State Road A1A 13 blocks south of Atlantic Boulevard. Approvals have been given for 92 units on the oceanfront and 211 units and 27 boat slips on a canal connected to the Intracoastal Waterway, according to The Real Deal.

Earlier this year, developer Yuri Gurfel sought approval for a development with 420 residential units, a 200-room hotel and 100,000 square feet of retail on the south side of Atlantic Boulevard just west of the Intracoastal Waterway on the site of the Atlantic Square shopping center.

Briesemeister says at least three more developers are looking at properties on the east side, and Carola Lueder, president of Properties USA, says institutional investors are showing interest as well.

Lueder says there’s even a redevelopment opportunity at St. Martin Episcopal Church, which is just south of Atlantic Boulevard on the Intracoastal Waterway. Plans call for part of the existing church to be replaced with a new community space that the church would offer for art shows and concerts, plus an acre for development.

Lueder recently moved to a ground-floor office near Cafe Maxx in the Harbor Village Shoppes, which have a curvy landscaped area near storefronts, perfect for outdoor dining.

While there’s plenty of activity in the east, there are also numerous sites for development on 65 acres the CRA controls closer to I-95 near Atlantic Boulevard. Briesemeister sees the potential for a mixed-use project that could resemble CityPlace in West Palm Beach.

In addition, Pompano Beach is being repositioned as an arts and cultural center. The city and the CRA are spending about $21 million on new cultural centers, two of which are open in renovated historical buildings.

Bailey Contemporary Arts (BaCA) is the centerpiece of Pompano Beach’s revitalized pioneer-era downtown at Dixie Highway and Atlantic Boulevard. The pigeon-filled 1932 hotel was expected to be torn down before the CRA bought it. The upper floor has been turned into loft spaces for artists while the downstairs has gallery space.

Sarah Miller Benichou left her position as education programmer at the Norton Museum of Art in West Palm Beach to become BaCA’s director. She is looking to add a coffee shop.

Briesemeister also pointed out a building that will be home to a concept by restaurateur Butch Johnson and chef Wayne Alcaide, who helped fuel the restaurant scene in Delray Beach with 32 East. Likewise, a former laundromat is going to get a restaurant from the proprietor of craft brew mecca The Riverside Market, which recently opened its second Fort Lauderdale location.

The area could eventually be a transit hub as well, since a Tri-Rail Coastal Link station is planned just north of Atlantic Boulevard.

Further west, at 454 Martin Luther King Boulevard/Hammondville Road, the Ali Building and Cultural Arts Center has opened as a performance, rehearsal and music venue after a $2 million renovation. The early 1930s building was once used as a boarding house for musicians such as Louis Armstrong and Cab Calloway.

Drew Tucker, a vibraphonist and educator who has been involved in West Palm Beach’s Kravis Center for the Performing Arts, Delray Beach’s Old School Square and Boca Raton’s Arts Garage, has been hired as the Ali’s director. He says he wants to involve local students and attract national and regional acts. The venue includes a 200-seat outdoor performance space. Grammy Award-winning jazz act Cory Henry & the Funk Apostles performed at the opening concert on Nov. 7.

A lot of buildings have been torn down in the neighborhood, so Tucker sees the renovation of the Ali Building as significant from an emotional standpoint to help build up civic and cultural pride.

Pompano Beach is also getting a 5,000-square-foot space for theater and dance performance in the new library and cultural center that’s on the east side of City Hall. It will also include a 750-square-foot gallery and a 2,500-square-foot digital media center.

Another major performance space is The Amp (Pompano Beach Amphitheatre), which is seeking to rebound after Live Nation stopped booking events there several years ago. Heavy metal acts Queensrÿche and Dokken are scheduled to perform in February and country rockers The Charlie Daniels Band and the Marshall Tucker Band are booked for March.

All the activity seems to be helping the city gain residents and become more of a live/work/play destination. Census data indicates that the city has grown from 99,844 in 2010 to 106,105 in 2014. Ric Green, who has led the Pompano Beach Chamber of Commerce for the last nine years, says employment in the city has increased by 5,000 to 56,000. The 33 million square feet of industrial space in the city has only a 5 percent vacancy rate.

Green says he loves the revitalized beachfront and downtown and loves to invite visitors. He says, “We are not that bedroom community with the smelly beach.” ?

Most of the oceanfront condos in Pompano Beach are decades-old boxy structures, but Sabbia Beach is bringing Arquitectonica’s modern flair to the landscape.

Sabbia, which means “sand” in Italian, is seven blocks north of the city’s pier. It was envisioned by Danny Salvatore, who owns a condo unit in the nearby Plaza at Oceanside, says Amy Ballon, founder of Hemisphere Sales Group, which is marketing Sabbia Beach. Salvatore wanted to be part of the area’s transformation, and his family’s Fernbrook Homes, which is based in Toronto, has developed 4 million square feet of condos over the past 40 years.

A lot of Sabbia Beach’s buyers are downsizing as they move east from Weston and Parkland, Ballon says. Prices were $450 to $500 a square foot when sales were launched, but are now hitting $625. Units are going from $900,000 to $5.8 million. In contrast, prices are hitting more than $3,000 a square foot in South Beach and $1,000 a square foot in Fort Lauderdale.

Invesca Development Group CEO Christopher Longsworth is bringing a new urbanism approach to Pompano Beach with Koi, a three-phase project that will have 350 residential units and a 25-slip marina on 9 acres along Atlantic Boulevard. The marina is on the Pompano Canal, which has fixed bridges with 9 feet of clearance at high tide on its way to the Intracoastal Waterway.

The first phase of the project is the waterfront villas, which start at $399,000, while the second and third phases will have lofts and condos or apartments. The first phase is mostly complete and Longsworth expects closings to start early next year.

The project will have an array of amenities, including koi ponds along Atlantic Boulevard, a gym, a spa, three parks, a dog park named after his dog, Murphy, a Zen park, a play area for toddlers and a nature trail that passes by mangroves.

Koi is 600 feet from the city’s new library and cultural center, which is under construction, and a short walk to the city’s historic downtown at Dixie Highway. When the project is done, Longsworth expects to have a restaurant atop one of the condo buildings and 18,000 square feet of commercial space along Atlantic Boulevard.