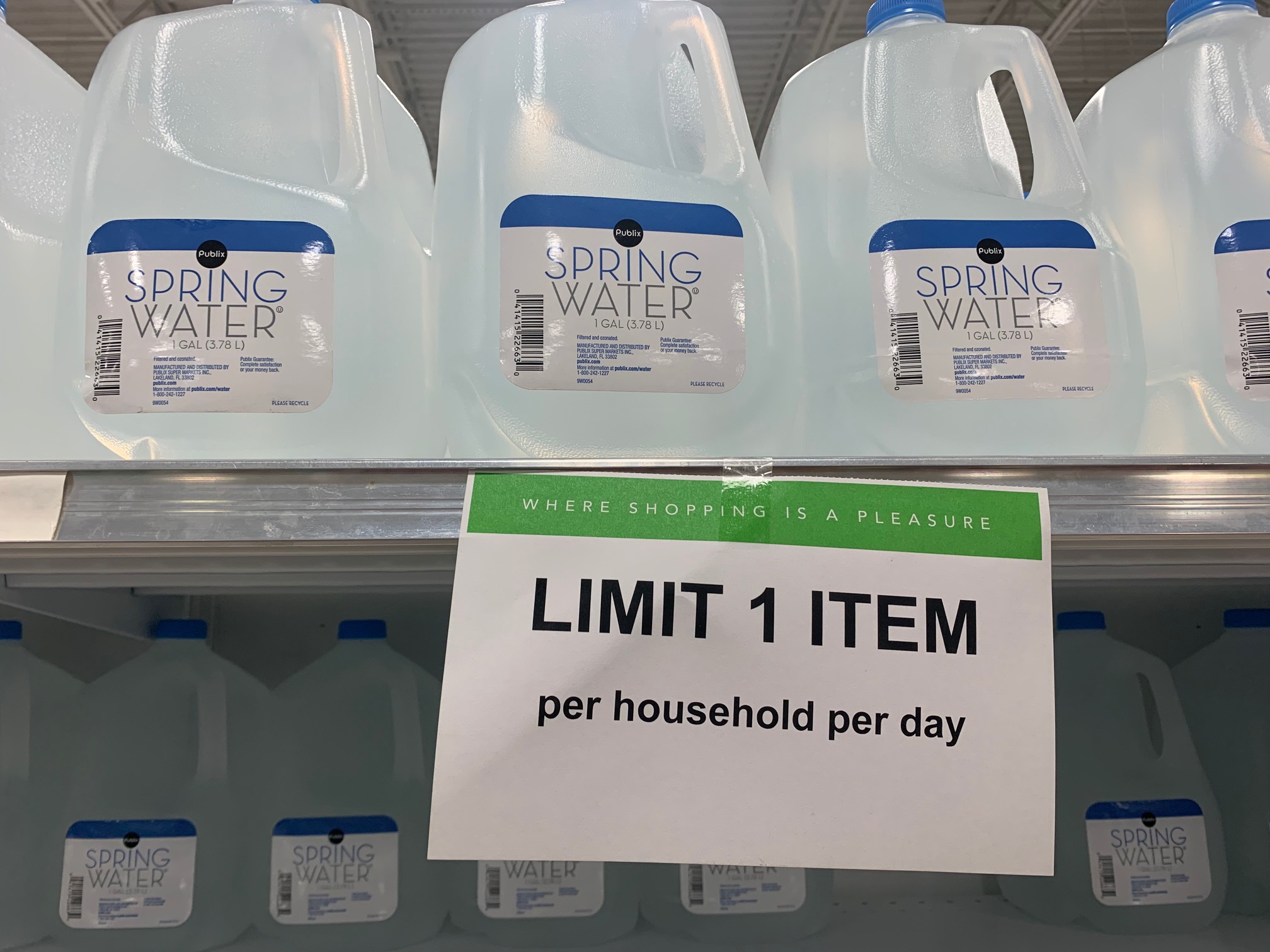 Publix: Where shopping is now a little different

Some products out of stock, others rationed amid coronavirus worries

If you want to get a slice of life look at how South Floridians are coping with coronavirus worries, a good place to start is its iconic supermarket chain: Publix.

At lunchtime on Tuesday, I visited a Publix in the Fort Lauderdale area and here’s an account of what it was like.

I grabbed a cart in the parking lot and was looking for sanitation wipes as I entered the store, but didn’t see any. That wasn’t surprising since they are in short supply nationally. However, a Publix worker pointed to some carts and said, “Take one of those, I’ve already wiped them down.”

A message from CEO Todd Jones on the Publix website said the supermarket company’s cleaning and sanitation standards already meet CDC guidelines, but the company has heightened its disinfection response. He also said customers also may take advantage of delivery or curbside pickup of groceries and other items. (Visit publix.com for details.) 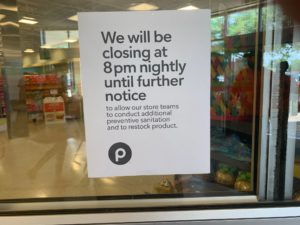 A sign lets customers know Publix will be closing early

There was a sign on the sliding entry doors that said the store would be closing at 8 p.m. Like many retailers, Publix is reducing hours to provide more time to stock shelves and conduct enhanced sanitation measures.

Once inside, one of the first things I noticed was an abundance of children with their parents since schools were closed. There were a handful of customers with face masks, but most shoppers walked around casually like it was a normal day.

Even in the middle of the day, the amount of personnel stocking shelves was obviously much higher than on a typical weekday.

Still, there was a struggle keeping some products in supply. There were some bags of potatoes left in the produce section, but not the fully stocked shelves usually found. Same thing for tomatoes. 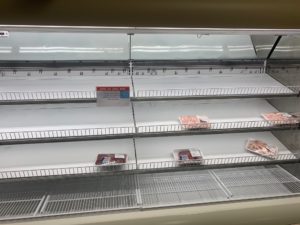 The display of chicken was nearly empty at Publix

The fresh chicken area was largely empty and a sign said customers were being limited to two packs of meat a day. In contrast to the fresh chicken, the beef displays looked pretty normal and the seafood cases were fully stocked.

When it came to hand sanitizer and sanitizing wipes, the shelves were empty. One clerk said they were on order and hoped that a truck the next morning might bring a new supply.

There was just a bit of bottled water on the shelves, but I keep thinking, “What’s up with that?” There’s been no indication that municipal water supplies in South Florida are about to go down. Perhaps, the hurricane prepper mentality is just carrying over amid the coronavirus scare. 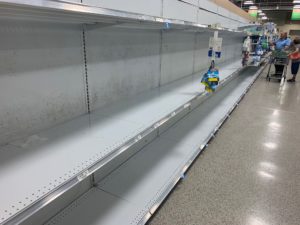 The paper towel area was out of stock at Publix

limited to one purchase per customer. I noticed one young customer holding paper towels and he pointed down the end caps and said there was a whole pallet. People were taking them off a large metal cart, which an attendant had just rolled out of the storage area.

There are any number of articles nationally about the lack of paper products and the stocking up wave in general.

My favorite quote was in a Los Angeles Times article: “It’s not like suddenly all the toilet paper factories in the world are burning down,” said Willy Shih, a professor at Harvard Business School who studies manufacturing supply chains. “They’re still cranking this stuff out.”

I also made a stop at the Publix Liquors store next to the supermarket. As I walked in, the clerk was doing a meticulous job in keeping her hands sanitize, but the store was nearly empty. I told her she might expect an evening rush since Gov. Ron DeSantis was issuing an order later in the day to close bars across the state.

One couple was looking for an alcoholic beverage strong enough to use as a disinfectant. The clerk recommended Everclear, which is 151 proof or 75 percent alcohol. The CDC says substances need to be at least 60 percent alcohol to work as a disinfectant, so she may well be on to something. Media accounts indicate Everclear is flying off the shelves nationally.

I joked to the customer that she shouldn’t spill any on the dining room table because it might take the varnish off. That got a laugh, which we could all use these days.