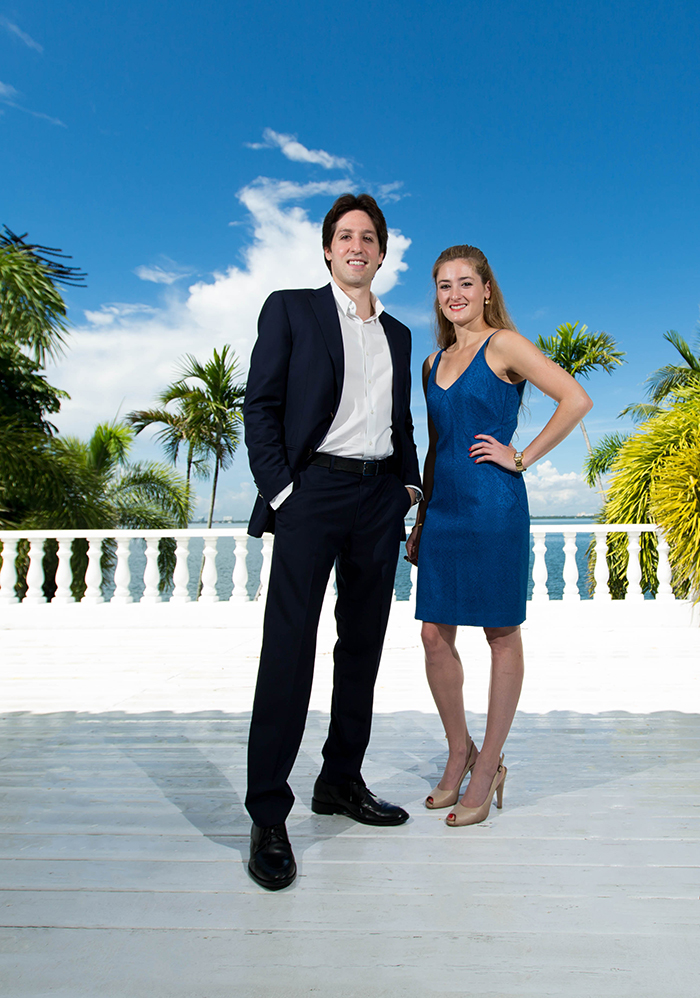 Danny and Hillary Hertzberg speak millennial because, well, they are millennials. And they’re using their knowledge of real estate, social media and technology to sell high-end residential real estate to young, wealthy adults who are migrating to South Florida from all over the world.

“We have a lot of young buyers from South America and Central America,” explains Hillary, 28, adding that they also see buyers from California, New York and New Jersey.

The wealthy millennials the Hertzbergs work with aren’t just heirs to fortunes. They’re also business owners, inventors, techies, bankers and hedge fund managers. “They love the lifestyle, the energy and the fact that South Florida is an international scene,” adds Danny, 33.

Minimal taxes are another draw to the region. “The fact that we don’t have a high state income tax is huge for the market,” Danny says. So huge, that many affluent buyers, young and old, become part-time Florida residents in an effort to avoid that extra bill.

But millennials are a finicky bunch, the siblings say. They aren’t merely content with fantastic homes like baby boomers. Nor are they obsessed with location like buyers from Generation X. Millennials, the Hertzbergs say, want the whole package. And it’s not a package they search for in newspaper ads or commercials. They find it through technology and social media.

The Hertzbergs understand the millennial perspective thoroughly. “We really know how to get through to them in the most efficient way,” Danny says. “We speak the same language.”

It helps that they are also fluent in real estate. Their mother is Jill Hertzberg, who, in the early 1990s, teamed up with fellow real estate broker Jill Eber to sell homes to the affluent in Miami Beach. Proclaiming themselves “The Jills,” Hertzberg and Eber amassed a reputation for selling mansions and penthouses to powerful executives and movie stars. Within the last two years alone, The Jills, along with their team of 20 Coldwell Banker brokers, have closed more than
$1 billion in sales. Both Danny and Hillary happen to be a part of that billion-dollar selling machine.

A graduate of Tulane University, Danny has a law degree and an MBA from the University of Miami. He previously worked for home-building giant Lennar before coming to work full time for The Jills in 2009. Among the first things he did was to bring The Jills into the 21st century. “They weren’t doing anything in social media,” he remembers. “I stared working on that aspect.”

Hillary arrived at the office a couple of years later. Armed with a psychology degree from Washington University in St. Louis, Hillary worked in sales at fashion house Theory and in digital marketing at MediaVest before becoming an associate for The Jills four years ago.

Selling to the next generation means showcasing properties with detailed video presentations via Instagram, Facebook, WhatsApp and other social media applications, the Hertzbergs say.

Unlike previous generations of homebuyers, millennials have no delusions about staying in a purchased home for 10 or 20 years, Danny adds. “They’re very comfortable with moving again,” he says.

At the same time, millennials are as interested in the perks of the neighborhood as they are in what the home they buy has to offer. “We’re more focused on advertising lifestyle,” Danny says.

And, after all the social media and texting, once the deal is ready to be closed, it isn’t a paper contract that’s presented. Instead, millennials prefer to consummate their real estate transactions using a digital platform called Dotloop, where fingerprints are used instead of signatures. “It’s better than ink,” Hillary says.

“After every transaction, we ask our clients what charity they want to give to,” says Danny. So far, they have donated over $15,000 to more than a dozen nonprofits, including the Humane Society of Greater Miami, Habitat for Humanity, the University of Miami Miller School of Medicine and Legal Services of Greater Miami. The donation is made in the client’s name, but it comes out of the Hertzbergs” commission. “It’s paying it forward,” Danny says. ?