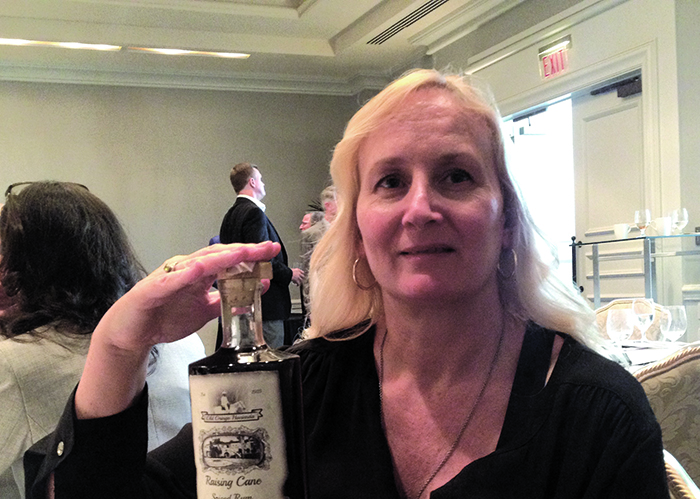 Distilleries are the new status symbol

You’ve undoubtedly seen noticed the wave of craft breweries popping up all over South Florida, but Nanette Watson’s idea for a craft distillery could be the next hot thing.

She visited South Florida as part of a Family Office Association meeting in Palm Beach to talk about South Texas Distilling LLC. As president and managing member, she wants to offer a model of sustainability – growing the corn, agave and sugar cane – for making spirits. She’s starting with rum.

“We are disrupters,” Watson says. “We are taking what is traditionally a large and industrial-based business and coming in as craft distillers.”

The concept for Watson’s project includes the agricultural land, a sugar mill, a barrel-aging warehouse, a visitor center, a store, a cocktail bar and an events center in the Padre Island area of Texas. (South Florida has a similar concept with the Schnebly Redland’s Winery and Brewery near Homestead.)

As outlined on oldgringodistillery.com and during her talk, Watson wants to raise $50 million, with a minimum raise of
$5 million and a projected internal rate of return of 23 percent. Limited partners will be the first to receive a 6 percent preferred return, followed by a partnership split of 75 percent to the limited partners and
25 percent to the general partner.

Another rum company, South Florida Distillers in Fort Lauderdale, recently announced an expansion of its distillery to a 4,600-square-foot location on South Federal Highway. See SFBWmag.com for more coverage.

A rendering of the new Pompano Beach Tri-Rail station, which will be completed in August

How Tri-Rail expansion was almost derailed

A two-part SFBW series about rail mass transit earlier this year talked about how Tri-Rail was expanding service to downtown Miami via a new interchange in Hialeah.

However, Executive Director Jack Stephens of the South Florida Regional Transportation Authority, parent of Tri-Rail, had to do some rapid maneuvering after the Florida Legislature failed to pass an insurance indemnification measure to cover accidents for the new service. Without that, the whole deal involving SFRTA, All Aboard Florida and the Florida Department of Transportation was ready to fly apart. Without legislative action, Tri-Rail couldn’t get FDOT state funding for the new link.

A deal passed by the SFRTA board in April will replace $20.2 million in state funding – $16.2 million in rail infrastructure, $3 million for a safety system and $1 million for access to the tracks. After the board meeting, Stephens was poised to start looking for a lender to provide the money, most likely a commercial bank loan.

Tri-Rail wants to split its existing service along the railway next to I-95; some trains would still go to Miami International Airport, while others would head to downtown Miami, using the same station as the Brightline high-speed service from Miami to Orlando. Ultimately, Tri-Rail
would like to have a Coastal Link commuter service along the FEC.

Meanwhile, a new headquarters for SFRTA will be finished Aug. 3 at the Tri-Rail stop near Sample Road in Pompano Beach. The building will be the first LEED Silver certified station and have solar panels on the roof.

The stadium as star

As preseason approaches for the Miami Dolphins, the biggest star these days is arguably the team’s stadium, which is nearing the end of a
$450 million renovation.

The countdown to kickoff is less than three months away, with the first home preseason game on Thursday, Aug. 25, against the Atlanta Falcons.

The construction is visible in the distance to travelers along Florida’s Turnpike, and SFBW found an even better view from the northbound exit ramp at 199th Street.

Rows of roof trusses are also visible on the west side of the stadium, waiting to be hoisted into place. According to newmiamistadium.com, 92 percent of the fans will be in the shade for a Sept. 1 kickoff. Large HD screens (1,472 inches or nearly 41 yards) will be placed in each corner of the stadium instead of above the middle of the end zones.

The groups are exploring a merger that would help create a better regional voice and provide more benefits for members. A memorandum of understanding was signed by the executive committees of each group and a final decision is expected by the end of the year.

“This is a great opportunity to provide even better service, leadership and value for businesses throughout South Florida while allowing us to operate more cost-effectively for our members,” says Christine Barney, chair of the Greater Miami Chamber of Commerce and CEO of rbb Communications. “The Greater Miami Chamber has always been a regional chamber serving Palm Beach to the Keys, and there are many issues that are more effectively addressed with a regional approach.”

“There are already many existing synergies between our two groups,” says Heiko Dobrikow, chair of the Greater Fort Lauderdale Chamber of Commerce and general manager of the Riverside Hotel. “By consolidating our power bases, we increase our ability to shape key issues regionally while continuing to address the matters that impact our local businesses and economy.”

A task force will study other national models currently used in Houston,
St. Louis and Orlando to explore the merger of the chambers.

Louis Flematti’s Le Cafe de Paris was scheduled to close last month. The tower behind it was previously the site of his French Quarter restaurant.

About 10 years ago, Louis Flematti sold the site of his restaurant, French Quarter, located just north of Las Olas Boulevard. It became the site of the 30-story Amaray Las Olas, which has a coffee bar, yoga studio, swimming pool, billiards lounge, dog spa and dog park for residents.

Fans of French cuisine were consoled by the fact that Flematti’s Cafe de Paris was still open on Las Olas, but he recently announced the 50-year-old restaurant was scheduled to close by the time this issue of SFBW was printed.

Flematti sold the property to the Las Olas Company during the recession, but is now planning to travel with his wife.

There was no immediate word from the Las Olas Company, the largest property owner on the street, on what would happen to the property.

Allied Kitchen & Bath is giving a boost to the Downtown Oakland Park Culinary Arts District with a new 10,000-square-foot showroom at 3484 NE 12th Ave. The city has been working to reinvigorate the downtown, whose biggest attraction is currently Funky Buddha Brewer

“Funky Buddha really put us on the map. But we want people to have a full experience,” says Kathleen Margoles, community and economic development director for the Community Redevelopment Area of Oakland Park, who envisions a street full of retail where people can hop from place to place. “We are actively recruiting restaurants, art galleries, clothing stores – anything that would attract more people to downtown.”

Oakland Park Mayor Tim Lonergan, along with other local dignitaries, joined Allied Kitchen & Bath founders, Bill and Joe Feinberg, and brothers Rob and David Feinberg, for the ribbon-cutting ceremony of the new location. FPL presented Habitat for Humanity of Broward County with a $20,000 donation that was accepted by Bill Feinberg, who is the Habitat chapter’s chairman. ↵