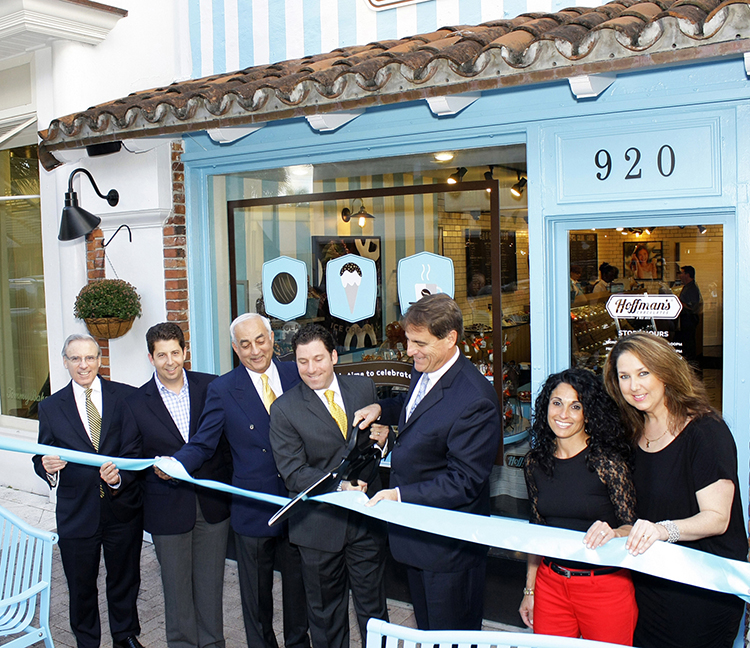 Hoffman’s Chocolate is known for four stores in Palm Beach County and one in Stuart, but is now making a big push further south.

“This is a really big year for us, says Jarett Levan President of BBX Capital. “First of all BBX Capital, that owns Hoffman’s Chocolate, is headquartered on Las Olas so we thought it would be appropriate to open our first store there.”

Another store is coming at The Fountains in Plantation in January and holiday shoppers can expect pop-ups at Sawgrass Mills, Broward Mall and The Galleria Mall.

Hoffman’s will be celebrating its 40th year in 2015. While it’s been a Palm Beach County brand for many years Hoffman’s has had a following in Broward County for just has long.

�We have had many customers visit our Palm Beach stores or our factories in Greenacres to get there chocolate fix. We thought it was appropriate to bring Hoffman’s to them instead,” Levan says.

About 75 new employees will be hired in Broward and Palm Beach and Levan expects a further expansion into Miami-Dade County.

Levan says, “This is a very exciting industry and we will continue to acquire other companies.

Steve Geller , former minority leader of the Florida Senate, served as the stand in for former Gov. Charlie Crist. Geller, who is a shareholder at Greenspoon Marder, was a member of the state legislature for 20 years.

Standing in for Gov. Rick Scott was Ed Pozzuoli, president of the Tripp Scott law firm. Pozzuoli makes frequent appearances on Fox News and was a member of the Bush/Cheney recount litigation team in 2000.

There were plenty of jokes about fans in the wake of the second gubernatorial debate, but Geller and Pozzuoli were a lot more relaxed and humorous than the real opponents.

One of the biggest topics turned out to be the impact of minimum wage increases with audience members concerned about the impact that might have on businesses in Florida.

Jay Olshonsky, president of NAI Global, says prices in New York have peaked and may have peaked in Miami as well, so it may be time to sell.

“If you have made money in the last three or five years don’t worry about the taxes. They are really low,” he said at the inaugural NAI Florida Forum in Coconut Grove. SFBW was the media partner for the event.

The event had presentations for NAI’s 11 Florida markets and economic analysis.

Karen Gilmore, Vice President & Regional Executive for the Atlanta Fed’s Miami branch, said there is a lot of study about the changing nature of the U.S. workforce.

While the unemployment rate has dropped there’s a lot of scrutiny about marginally attached workers and those working part time.

J. Antonio Villamil, founder and principal of the Washington Economics Group, outlined how Florida is exceeding the nation in economic activity, which has been a huge support for real estate activity.

While Villamil’s talk was positive he said it’s important to avoid the “Ostrich Effect” because of economic uncertainty in Europe, questions about what Russian leader Vladimir Putin will do next and the impact of ISIS and ebola.

He expects regulatory action to slow down with the new GOP dominated Senate.

Villamil, who served as undersecretary of commerce for president George H.W. Bush, was asked about the prospects of Jeb Bush running and said, “I hope he does, but that’s up to him.”

One tidbit she mentioned is that young wealthy Mexicans are more likely to do business in Miami than the previous generation.

Manny Mencia, a senior VP with state economic development arm Enterprise Florida, gave perspective on the size of the state economy. Its $800 billion in GDP is a little smaller than Turkey and larger than the Netherlands. Florida’s population is about 19.55 million the state has probably already passed Florida to rank as the fourth most populous state.

TechAmerica ranks Florida No. 3 for high-tech establishments and the state has 28.4 percent of U.S. trade with Latin America and the Caribbean.

There’s a tale of two Latin Americas these days, he says.

There are the open economy nations that include Peru, Mexico, Chile, Panama and Colombia. Venezuela, Argentina and Brazil are struggling because they follow the populist statist line.

�It’s strange why some nations don’t get it,” he said.

�Caymus for a Cause”

The law firm of Katz Barron Squitero Faust teamed up with South Florida Business & Wealth and Wine Watch for “Caymus for a Cause,” a VIP Wine Tasting event benefitting Jack & Jill Children’s Center.

The event on Oct. 29 at Alpine Jaguar raised almost $6,500 dollars for the center, which helps to break the cycle of poverty for children of low-income, working, families in Broward County through family-oriented child care services and family intervention and support.

Rick Case Automotive Group hosted a topping out ceremony for the new Rick Case Kia dealership, which is located on Sunrise Boulevard at the Sawgrass Expressway.

The five-story, 260,000-square-foot dealership will be Rick Case’s first in the Sawgrass Mills area and is billed as the largest Kia dealership in the world.

Rick Case Kia will feature 600 new and used cars inside under showroom lights on 5 floors, and will open with over 100 employees that will grow to a staff of over 150.

This is the 12th collaboration between Stiles and Rick Case on dealership projects.