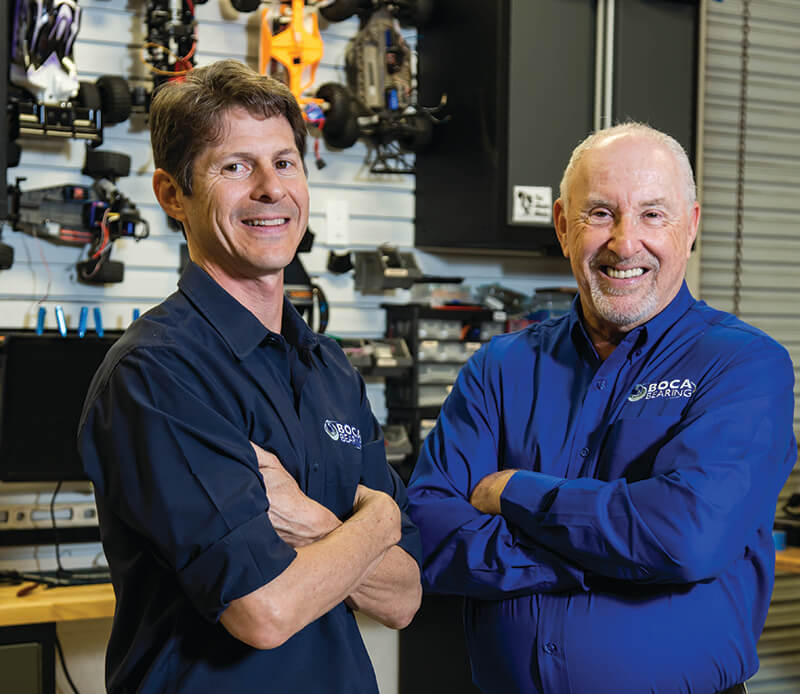 The company that makes the world go around

Fidget spinners? Didn’t even make it to Christmas. Drones? Been there, done that. Radio-control helicopters? Ditto.

Far from flash-in-the-pan phenomena, these consumer crazes speak to the DNA of 30-year-old Boca Bearing Co.

“I have an insatiable curiosity, and that’s what we look for in the people we hire,” says Jason Flanzbaum, 45, president and CEO of the Boynton Beach company. “Every time we talk to companies that are pushing speed and temperature, I get fascinated. It’s impossible not to get fascinated.”

But the company didn’t have this innovative edge when Flanzbaum’s father, Allen Baum, founded it in 1987. Baum had done sales for another bearing company, but then he struck out on his own and moved with his wife Michele to Florida from Massachusetts. He faced a daunting challenge when he began running a fledgling bearing company out of Jason’s bedroom.

“I had a background in all kinds of bearings, but limited capital,” says Baum, 74. “My old company had $14 million in inventory and I had virtually nothing. I had to find my own way, figure a way of specializing.”

Boca Bearing discovered its niche by catering to the radio-control enthusiast, guiding kids working in their garages to make their RC cars and boats run faster by changing the bearings, changing the motor, changing the wheels. Years later, these “kids”—hanging onto that same insatiable curiosity—had become engineers at places such as NASA’s Jet Propulsion Laboratory in California and Florida Atlantic University’s Harbor Branch Oceanographic Institute in Fort Pierce. And they remembered Boca Bearing.

“When they came to a problem like a vacuum application or a seawater/underwater application, they automatically thought of us because nobody else would really work with them,” Flanzbaum recalls.

Still, it’s not as if Flanzbaum brought engineering acumen to the company when he came onboard about 15 years ago. What he brought, in fact, was an accounting and information-systems degree from the University of Massachusetts at Amherst. But when his father wanted a new website for the company, Flanzbaum came from Massachusetts to Florida “for a year or two.”

“I’ve got an engineering heart,” he says. “We like to solder and 3D print and fly drones and do those types of things. We relate to our customers. We really like to do those things. We find it fun.”

Named in 2012 to the Florida Companies to Watch list by GrowFL, a state-supported economic-development program, Boca Bearing today focuses on the “real challenging project,” Flanzbaum says. With 24 employees, its focus has shifted away from retail customers and more to industrial customers. A recent addition is a manufacturing-and-design director, who joined Boca Bearing with 30 years in the industry to help the company pursue custom-design projects and problem projects.

Nevertheless, the romanticism, the sense of adventure and that insatiable curiosity remain driving forces. That’s why Flanzbaum jumped at the chance when he was contacted by the Long Now Foundation about its 10,000 Year Clock.

The sci-fi-inspired undertaking—being built into the side of a west Texas mountain with the support of Amazon’s Jeff Bezos—aims to create a clock to run 10,000 years without external power. It would run on hundreds of stainless steel, titanium and ceramic ball bearings.

“It was a pivotal point for me, personally. It has a very romantic edge to it. They were using these full-ceramic bearings, really running them through the paces. Running them millions and millions of cycles. This was a no-brainer,” he says, the enthusiasm for the project still evident. “We went out there, visited them, put a lot of money into some of that stuff, some of the white papers. Just because it is inspiring.”

But that’s how Flanzbaum thinks. He likens Boca Bearing to one long episode of the TV series “How It’s Made.”

Racks of bearing are ready to roll

Though his son has taken the reins of the company, Baum still comes to work 3½ days a week, and has no trouble describing his role: “visionary.”

“My job,” he says, “is to come in every day and give them 20 or 30 of my most brilliant ideas, and occasionally they take one.” He believes his contributions are “right in tune with what’s going on. I like to think I’m paying attention.”

His other contribution? Keeping his son grounded. “We sit, we talk, he asks, I tell, he uses what he thinks is good. He may push back on things he may not like, but we’ve developed a phenomenal back-and-forth.”

Father and son both see a bright future for Boca Bearing. While there are growth opportunities through acquisitions, Flanzbaum still is driven by an insatiable curiosity.

“It’s just the evolution from supporting the kid who was the tinkerer, to the kind of company that traveled with him to some pretty serious applications in the scientific realm.” ♦