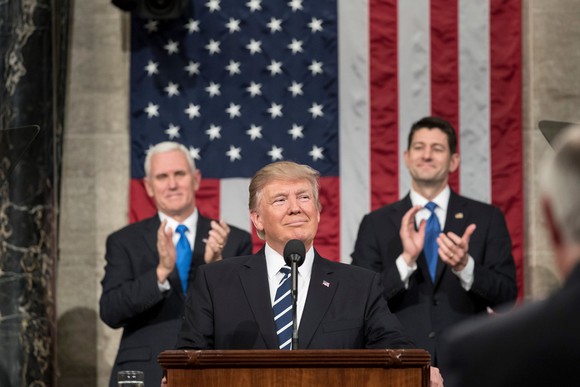 The American Health Care Act would repeal many taxes and change the way insurance subsidies are calculated. Find out more about how your taxes could be altered by Trumpcare.

The American Health Care Act, also known as Trumpcare, would reshape the ways in which the federal government operates in the insurance market. The framework put into place by Obamacare to help Americans obtain insurance coverage would be repealed, and Trumpcare would work very differently in how it helps families buy insurance. Trumpcare would also eliminate many of the taxes that were used to fund Obamacare. The Congressional Budget Office estimates that Trumpcare would reduce revenue by nearly $1 trillion by 2026.

While the Tax Policy Center concludes that the wealthiest families are likely to see the biggest tax breaks under Trumpcare, the law — if passed — would change taxes for individuals and families across all income brackets. In some cases, this would mean more money in the pockets of taxpayers. But thanks to changes in the ways tax-based insurance subsidies are calculated, Trumpcare could also hit the pocketbooks of some families hard and leave them unable to afford insurance.

Here are three big ways your taxes could change if Trumpcare passes.

One of the most controversial provisions of Obamacare was the Individual Shared Responsibility Provision, better known as the individual mandate. The mandate requires that each individual, including children, be covered by a qualifying healthcare plan with minimum essential coverage.

Going without coverage could trigger a tax penalty, unless the individual falls within a coverage exemption. Exemptions can be made for some individuals, including those whose premiums would exceed a certain percentage of their income; those who went uninsured for less than three months; participants in a health sharing ministry; incarcerated individuals; and members of certain religious sects or a “federally recognized Indian tribe.”

The penalty for not having coverage could total the greater of 2.5% of total household income or $695 for each adult and $374.50 for each child without coverage, up to a $2,085 maximum. The mandate was intended to force young and healthy people to buy insurance, rather than wait until they become sick (and thus costly to the system). Trumpcare would repeal this mandate and instead encourage healthy people to purchase insurance policies by allowing insurers to charge higher premiums to people who fail to maintain continuous coverage.

2. Tax subsidies for the purchase of insurance could change

Obamacare and Trumpcare both help individuals and families afford the cost of buying insurance on the individual market. However, the rules for calculating the subsidies intended to offset their insurance costs differ dramatically under the two different laws.

In determining how large of a subsidy an individual can receive, Obamacare accounts for income, the cost of insurance in each geographic area, and the age of the person purchasing insurance. The goal is to ensure that each person can afford to buy a plan, so subsidies are tied directly to actual costs.

Trumpcare, however, only accounts for age when calculating subsidies. While subsidies begin to phase out under Trumpcare once individuals have incomes exceeding $75,000, income is otherwise not a factor in determining the insurance subsidy they’re entitled to. Subsidies would increase by $500 for each age bracket: Those aged 20-29 would receive credits of $2,000, while people aged 30-39 would receive $2,500, and so on. Americans aged 60 and older would receive the maximum credit of $4,000.

Because subsidies are flat among insurance buyers within a specific age group, middle-class individuals would benefit more from Trumpcare’s subsidy calculations, while poorer Americans might get subsidies that are less generous than they are under Obamacare. And because geographic differences in pricing aren’t considered, people in areas where premiums are higher might get less generous subsidies under Trumpcare, while buyers in places with lower premium costs might get larger tax credits than Obamacare provides.

3. Tons of Obamacare taxes will be repealed

Obamacare raised taxes substantially to pay for the assistance the federal government provides to Americans purchasing insurance. Almost all of the Obamacare taxes would be repealed under Trumpcare, including the employer mandate for large employers who fail to provide coverage for full-time employees; a tax on indoor tanning services; a medical device tax; a Medicare surcharge on high earners; higher capital-gains taxes for high earners; and taxes on health insurers, as well as manufacturers and importers of name-brand drugs.

Trumpcare also delays the implementation of a so-called Cadillac tax, which is a tax on generous employer health insurance plans. The Cadillac tax allows higher contributions to health savings accounts to pay for care with pre-tax funds, and it allows taxpayers to deduct medical expenses once their out-of-pocket costs exceed 7.5% of their income, instead of the 10% threshold put in place by Obamacare.

This tax break for lower-income and middle-class families may not be anywhere near enough to offset what you lose in subsidies if you’re currently getting a lot of help under Obamacare. Finding ways to maximize your tax benefits and reduce health costs as much as possible — for example, by using a health savings account — could become essential to help you afford care if Trumpcare passes.