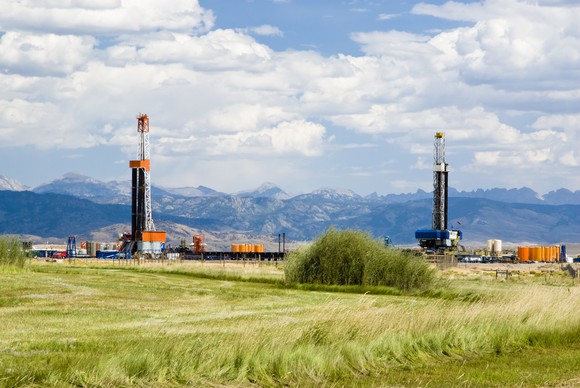 3 Energy Stocks to Buy at the Bottom of the Cycle

The oil and gas market is still in the doldrums, and that means shares of Ensco, Devon Energy, and U.S. Silica Holdings look attractive.

It’s kind of hard to believe, since oil prices started to crash in late 2014, but we are still at or somewhere near the bottom of the oil and gas market cycle. We have seen a few companies — mostly a select group of shale drillers — start to rebound thanks to better cost control, but other parts of the industry remain mired in the trough of this cyclical industry.

For investors, though, this is the time to start adding energy stocks to one’s portfolio. So we asked three of our energy contributors to each highlight a stock they see as a bottom-of-the-cycle pick. Here’s a brief rundown of their selections: Ensco (NYSE:ESV), Devon Energy (NYSE:DVN), and U.S. Silica Holdings (NYSE:SLCA).

A savvy move has this offshore driller ready for the upswing

Jason Hall (Ensco plc): Even with oil prices up significantly from the “true” bottom more than a year ago in early 2016, offshore exploration and drilling investment has only recently shown any sign of recovery. 2017 is on track to be the worst year for offshore in almost a decade, with another double-digit decline in spending already underway. This has made what was already the worst downturn in the offshore segment in over 30 years even worse, and pushed some of the industry’s biggest companies to the brink of bankruptcy.

Even with the possibility that it could get even worse and shares of offshore drillers could fall farther, I think ENSCO is a very compelling offshore driller — particularly with its recent deal to acquire Atwood Oceanics. Not only does this significantly upgrade ENSCO’s older fleet, but as an all-stock deal, it doesn’t cut into ENSCO’s $4 billion in combined cash and available credit liquidity. And, the $1.3 billion in debt that comes along with Atwood is quite manageable.

This move also added to ENSCO’s backlog, pushing it to $3.7 billion, but the big win is that it was able to add 11 new high-specification vessels and their highly skilled crews to its fleet. There will be more ups and downs in the near term, but this move should pay off in a big way once the market does eventually recover.

This top-tier shale driller is still in the bargain bin

Matt DiLallo (Devon Energy): While Devon Energy’s stock has bounced back from the low it hit in the pit of the oil market downturn, it’s still down more than 50% from where it was three years ago. That’s despite completing a slew of strategic initiatives that now have the company starting to turn things around and position it to deliver robust growth at lower oil prices.

The hallmark of the new Devon is a focus on investing capital in the Delaware Basin side of the Permian Basin and the STACK region of Oklahoma, because these plays offer the best returns and growth prospects in its portfolio. It’s a strategy that should drive 13% to 17% oil production growth by the end of this year, and 20% oil growth in 2018. Furthermore, the company can deliver peer-leading cash flow expansion of 200% this year if crude averages $55 per barrel, which shows just how lucrative its newest wells can be in the current market environment.

What’s so compelling about Devon Energy right now is that it has just started rebooting its oil development program, which should drive robust production and cash-flow growth in the coming years. Given how severely beaten-down its stock has been in the recent past, this strategy to expand oil output by drilling high-return wells could fuel substantial returns for investors if everything goes according to plan.

Tyler Crowe (U.S. Silica Holdings): Just about every investor threw frack sand stocks away as the shale boom started to turn to a bust. At the time, it was a completely justifiable position. Shale drilling was barely profitable at $90 a barrel, the sand market was oversupplied, and most of the companies in the business had taken out way too much debt to expand their operations at the top of the cycle. Ever since oil prices started to crash in late 2014, it’s been a long, steep decline for frack sand producers. 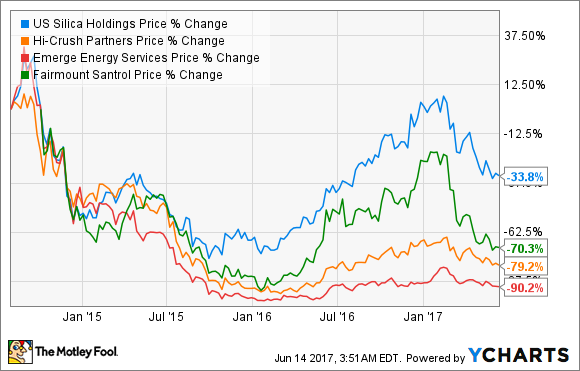 The one company that handled this downturn decently was U.S. Silica. Its management team was more conservative about pursuing growth projects and avoided some of the debt pitfalls that plagued so many others. Also, it has a larger presence in the industrial and specialty product sand market that helped to keep some cash coming in the door during the hard times.

Today, the frack sand market looks even better than it did in 2014. Producers use more than double the amount of sand per well than in 2014, well economics have improved enough that several companies can generate a return with oil in the $50-to-$55-a-barrel range, and the speed at which rigs can drill a well means fewer rigs doesn’t necessarily mean fewer wells. In fact, U.S. Silica peer Hi-Crush Partners estimates that total sand demand is now 45% higher than 2014, even though the number of active drilling rigs is half what it was pre-crash.

The frack sand market is still going to be a bumpy road over the next several quarters. That surge in demand means sand producers are spending lots of money to bring idle facilities back online and build new ones. Still, U.S. Silica looks to be the best bet to ride the frack sand renaissance. It has the best financial foundation among its peers, it has a new logistics and last-mile delivery service that improves per-ton margins, and isn’t stretching itself too thin with new expansion plans. If you want to ride the next oil cycle to the top, you should definitely look at U.S. Silica.

10 stocks we like better than Devon Energy
When investing geniuses David and Tom Gardner have a stock tip, it can pay to listen. After all, the newsletter they have run for over a decade, Motley Fool Stock Advisor, has tripled the market.*

David and Tom just revealed what they believe are the ten best stocks for investors to buy right now… and Devon Energy wasn’t one of them! That’s right — they think these 10 stocks are even better buys.