These three stocks offer temping dividend yields, but retirees would do well to avoid them.

In today’s low-interest-rate environment, many retirees are turning to the stock market in order to generate some income from their portfolio. After all, the dividend yield on the S&P 500 is 2% right now, which is higher than the yield on a 10-year Treasury bond. Many individual stocks offer even greater yields than the S&P 500, making them awfully tempting to retirees who are looking to supplement their Social Security checks.

Of course, just because a stock is offering up a high yield doesn’t mean that it’s a great buy. In fact, there are plenty of high-yield stocks on the market today that would be terrible investments for retirees.

Which stocks in particular, you ask? Below is a list of three stocks that I think retirees should avoid completely.

If you screen for high-yielding stocks in the healthcare sector, then you may come across PDL BioPharma (NASDAQ:PDLI). For years, this company was known for paying out a massivedividend, and many websites currently list its yield at an eye-popping 6.8%. Tempting, right?

Well, you should know that PDL BioPharma isn’t a typical pharmaceutical company that manufacturers and sell drugs to produce revenue. Rather, this company’s business model is to buy royalty and patent assets for drugs that other pharmaceutical companies sell. Those companies then pay generous royalty payments back to PDL for the privilege, and PDL then distributes some of that money to its shareholders.

The only problem with this winning formula is that PDL’s revenue is set to plummet due to the loss of royalties from its “Queen patent portfolio,” which has been the company’s cash cow for years. Those royalties expired in December 2014, and as inventory is worked off, the company’s financial statements are taking it on the chin. Revenue is expected to plunge by 63% this year and another 29% next year.

In response to the tough times ahead, PDL finally made the wise move of eliminating its quarterly cash payout just a few days ago, which caused shares to plunge. Unfortunately, many free stock screeners are still showing that the company has a juicy yield, but that’s simply not the case. Given that the company is still looking for ways to stem the coming revenue decline, retirees would be advised to avoid this stock like the plague.

This tech giant’s best days are in the past

With roots going back all the way to 1939, HP Inc. (NYSE:HPQ) is a name that many retirees are likely familiar with. For decades this company was a leader in the tech space, and its legendary founders went on to build a company with sales that measure in the hundreds of billions. Add to that its strong brand-name recognition and its current dividend yield of 3.5%, and it’s not hard to believe this is a stock that many retirees covet.

Unfortunately, the odds look good that HP’s days of being a great investment are long gone, as the company is besieged with problems. The most glaring ones are that its two main business units — printers and PCs — appear to be in a permanent state of decline. Last quarter, revenue from its “personal systems” business fell by 5% when adjusting for currency movements, and printing revenue dropped by 10%. Given that most consumers these days are turning to mobile devices like smartphones and tablets for their computing needs, I have a hard time seeing either of these trends reversing themselves.

It’s also worth remembering that HP recently split its business into two separate publicly traded companies. At the time of the split, CEO Meg Whitman chose the retain the top chair at Hewlett-Packard Enterprise (NYSE:HPE), not HP, which should speak volumes about which business she thinks has the brighter future.

HP is doing its best to appease shareholders by repurchasing stock and paying out the generous dividend, which could be a smart move as shares trade for less than 8 times trailing earnings. However, I’m a firm believer that such actions are only smart when your primary business in destined for growth, so this is another stock that I’d recommend avoiding.

A telecom that’s living on the edge

Regional telecom providers have long been known for shelling out generous dividend payments, and with a yield of more than 7.1%, CenturyLink (NYSE:CTL) might look like an attractive income candidate. However, a look back at this company’s dividend history suggests that you should give this stock a wide berth. 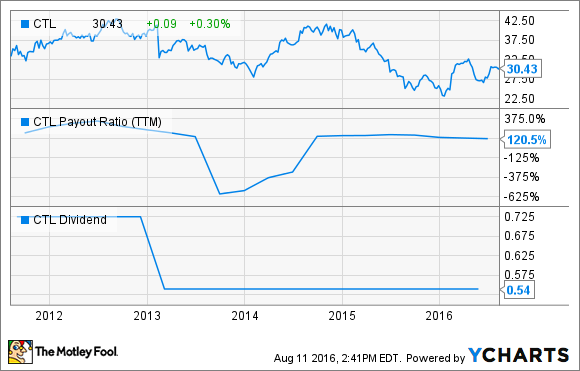 This chart is a bit busy, but it shows that the company has a history of paying out more in dividends each year than it earns in net income. That’s troubling, especially with analysts projecting that profits will flatline over the next five years.

In addition, the company even made the decision to slash its payout a few years back in order to put its capital to more productive uses. I think that was a smart move, but the stock price understandably plunged as investors who were only sticking around for the dividend ran for the exits.

To its credit, CenturyLink is trying to lower its and raise its profitability. Earnings grew last quarter, partly due to layoffs, but I find it hard to be bullish on a company with declining revenue. Looking ahead, it seems fair to expect continued weakness in CenturyLink’s legacy businesses, which growing units like high-bandwidth data will have a hard time overcoming.

Looking ahead, the company doesn’t have a lot of room to maneuver, given that its dividend consumes so much of its earnings. It’s possible that management could once again decide to cut the payout in order to give themselves more breathing room. That makes this a high-risk dividend stock that I think investors should avoid.

If you’re completely dependent on your portfolio for extra income, then I can certainly understand the desire to invest in only high-yield stocks. However, it’s important to realize that not all dividend-paying companies are created equal. If your aim is still to generate as much income as possible, then here’s a list of far superior high-yield stocks for you to consider.

David and Tom just revealed what they believe are the ten best stocks for investors to buy right now… and HP wasn’t one of them! That’s right — they think these 10 stocks are even better buys.

Brian Feroldi has no position in any stocks mentioned. Like this article? Follow him on Twitter where he goes by the handle @Longtermmindset or connect with him on LinkedIn to see more articles like this.