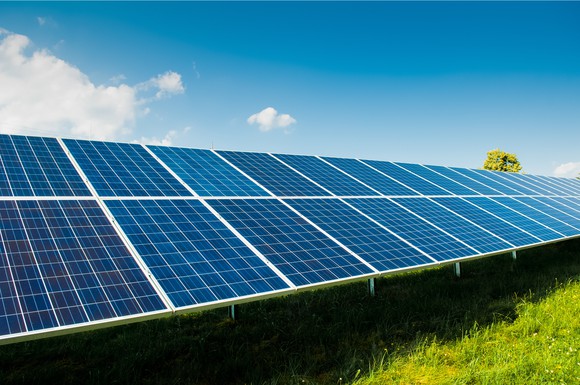 Solar is becoming competitive with fossil fuels. Here are three solar stocks for investors considering staking a claim in this emerging industry.

Solar stocks have given investors a roller coaster of a ride practically since the beginning. Some have, historically, been quite profitable. Others, such as SolarCity, have been absorbed by other companies (or even gone bankrupt) due to a sea of endless red ink. It would not be a stretch to say that solar-panel stocks, on the whole, have not rewarded investors, due to competition from low-cost Chinese solar-panel manufacturers and good old-fashioned technological price deflation.

Fortunately, the storm of foreign competition seems to be passing, and a few top solar stocks look poised to rebound in the future. In particular, First Solar (NASDAQ:FSLR), NextEra Energy(NYSE:NEE), and 8Point3 Energy Partners (NASDAQ:CAFD) are compelling.

A solar stock with a long history of innovation

First Solar is a provider of integrated solar energy solutions, primarily to utilities. It designs, manufactures and sells solar modules (arrangements of solar cells) with some of the highest-efficiency solar cells in the world, installs them in large-scale projects for utilities, and even provides maintenance services on these installations as time goes on.

Founded over 25 years ago by inventor Harold McMaster as Solar Cells, Inc., the company was taken private by True North Partners, a private equity group, in 1999, only to sell shares to the public again in 2006. Upon going private, it was renamed First Solar, Inc., and has retained the name to this day.

The company is one of the world’s largest of photovoltaic (PV) solar modules. First Solar has established and continues to develop a presence on six continents (although the United States still accounted for 83% of 2016 revenue).

First Solar operates its business in two segments. Its components segment involves the design, manufacture, and sale of solar modules, while its integrated systems business (referred to by management as its “systems segment”) provides complete, large-scale, turnkey PV solar-power systems to utilities.

Investors should be aware that First Solar is in the process of upgrading its manufacturing equipment to focus on its latest generation of solar modules, the Series 6. This move is costly and is the primary reason for last year’s losses. It will likely be worth it, however, as this focus on ever more advanced and efficient solar arrays will almost certainly lead to increased business in the years ahead. As one of the world’s premier solar manufacturers and thanks to the return to profitability projected this year, First Solar should be one of the first stocks investors consider in the solar sector.

A utility with a solar focus

NextEra Energy Inc. is a genuinely green energy utility, and also happens to be one of the largest electric power companies in North America, with much of its electricity generation coming from solar, wind, and nuclear energy. In the years ahead, thanks to continued efficiency gains (acknowledged by management in a recent presentation to analysts) that have brought solar power to parity with conventional electricity generation costs, investors can expect NextEra to become a bigger and bigger player in the solar sector in the years ahead.

At the end of last year, the company had 45,900 MW of generating capacity across 30 U.S. states, as well as some capacity in Canada and Spain. NextEnergy owns 16% of the installed wind turbines in the U.S., 11% of the U.S. production capacity for universal solar power (which excludes small, private solar panels), and eight nuclear reactors in four U.S. states. It is not entirely “green” yet, with some of its electricity generation coming from natural gas. However, the company produces significantly lower greenhouse-gas emissions than the rest of the industry.

NextEra’s management expects earnings per share of between $6.35 and $6.85 for this year and $6.80 to $7.30 for the fiscal year 2018. These earnings projections are right in line with management’s stated goal of not only generating green electricity but also growing EPS by 6% to 8% per annum through the fiscal year 2020. At 21 times forward earnings, and sporting a 2.75% dividend yield, NextEra is a great stock for any portfolio.

Quintessential solar stock 8point3 Energy Partners has the sole purpose of generating and selling electricity from a growing portfolio of utility-scale solar projects that it owns. However, 8point3 isn’t a typical corporation: It’s a “yieldco,” created to own profitable (but extremely capital-intensive) solar projects built by solar-array manufacturers (known as “sponsors”). In 8Point3’s case, it was formed by not one but two sponsors, First Solar and SunPower (NASDAQ:SPWR), for this very reason.

Operating much like a REIT, 8point3 has contracts with some of the largest utility enterprises in the U.S. to sell them electricity from its solar panels, for an average period of 21 years. As of the end of last year, the company owned and operated ten utility-scale solar projects.

Investors should be aware that its two sponsors recently expressed a desire to exit the affiliation with 8Point3 Energy Partners. The jury is still out as to what exactly will become of this stated desire, but 8Point3 Energy is likely to reward investors no matter what the outcome. There’s just too much to like. It continues to increase its mouthwatering 7.6% dividend yield (announcing in its recent earnings release that it was increasing the payout 3%) and has significant growth catalysts available to it from just First Solar.