5 Diseases That Could Be Cured in the Next Decade

Through the use of new and old-ish gene fixing technology, these five diseases could have cures by 2026!

Welcome to the future of medicine!

Over the past few years, the FDA has approved over 100 new drugs. Guess how many the agency has described as a “cure.”

If you guessed zero, then pat yourself on the back.

Don’t blame the government. The word “cure” isn’t in the FDA’s vocabulary for a reason. With the exception of most infections, practically all diseases require lifelong therapy. But that’s about to change — rapidly.

I think you’ll agree that a one-time treatment that permanently alleviates symptoms is a cure, no matter how it’s described by any government agency. Thanks to the tireless efforts of Editas Medicine (NASDAQ:EDIT), bluebird bio (NASDAQ:BLUE), and Ionis Pharmaceuticals (NASDAQ:IONS) here are five diseases that just might have a “cure” available by 2026 or earlier.

1. Blindness
You can’t swing a dead cat in Cambridge, Mass., without hitting a Ph.D. trying to harness the potential of CRISPR-Cas9. This cool new gene-editing system is about a zillion times more effective than previous techniques, and companies built around it are popping up like dandelions. 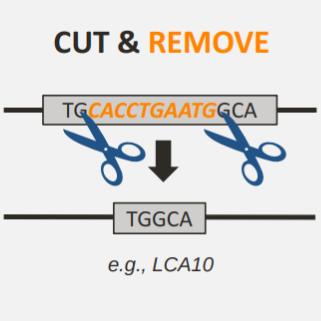 Arguably furthest ahead is Editas Medicine. It raised $94.4 million in its first public offering this February, and the stock has risen more than 80% since, valuing Editas at over $1 billion.

People with a rare form of blindness known as leber congenital amaurosis 10 will be thrilled to learn that Editas will use its vast resources on their disease first. The company thinks it can program the Cas9 protein to “cut and remove” the mutation responsible.

Since Editas has yet to submit an application for testing a product in humans, it’ll be a while before we know if this will work. This particular fix might affect less than 4% of children destined for school-age blindness, but if Editas can fix one genetic defect, many more could follow.

2. Sickle cell disease
Technically, stem-cell transplants can alleviate sickle cell disease, but they’re extremely risky because of graft-vs.-host disease, and so they’re rarely performed. Bluebird bio’s LentiGlobin program could help the 100,000 Americans and millions more people around the globe with the disease. LentiGlobin treatment involves stem-cell transplant with a patient’s own cells, practically eliminating the risk of rejection.

Bluebird’s approach involves infecting patients’ stem cells with a functional hemoglobin-producing DNA, outside their body. The modified cells are transplanted back into the patient’s bone marrow.

So far, only a handful of severe sickle cell disease patients have been given the treatment, and only one has been examined one full year after treatment. That patient is doing great, and two patients in a separate study have shown fantastic progress as well.

3. Beta thalassemia
Beta thalassemia is similar to sickle cell, except the estimated 70,000 patients affected worldwide don’t produce enough hemoglobin, and many of these patients require frequent blood transfusions. Since this disease is also the result of a faulty hemoglobin gene, Bluebird’s LentiGlobin could be a two-for-one deal.

When the company last checked in, a couple of patients who had begun early had gone more than 20 months without requiring a blood transfusion, and one was producing generally normal hemoglobin levels.

4. Adrenoleukodystrophy
Without control groups for comparison, it could be years before Bluebird can file new drug applications for LentiGlobin, but another stem-cell treatment (Lenti-D) could be ready for the FDA much sooner.

Bluebird ran simultaneous trials: one with Lenti-D, and another with regular stem cell transplants in children with cerebral adrenoleukodystrophy, a deadly genetic disorder that involves destruction of nerve cells responsible for thought and muscle control that affects between 35 and 40 newborn boys in the U.S. each year.

Those receiving Lenti-D — another modified version of their own cells — are doing well with minimal side effects. Four of 35 receiving stem cell transplants from donors, the standard treatment, have died, and the trial isn’t finished yet. Bluebird isn’t running the standard donor-stem-cell transplant trial to be cruel, for the record (and remember this is the standard of care) but rather as a control group for comparison with patients given Lenti-D therapy.

5. Spinal muscular atrophy
This neuromuscular degenerating disease is the leading genetic cause of infant mortality, and partners Ionis and Biogen could file an application for its potential cure late next year. The treatment consists of a single spinal injection with drug called nusinersen, and it’s in registrational studies for children and infants.

Nusinersen is far different from Bluebird’s cellular therapies, but it too involves fixing a faulty gene, allowing production of a vital protein that could help the roughly 250 children born with this disease in the U.S. each year.

Watch. This. Trend.
In case you haven’t noticed, each of these cures involves a genetic fix of sorts. While Ionis uses the oldest technology, its stock might be the safest of the three. 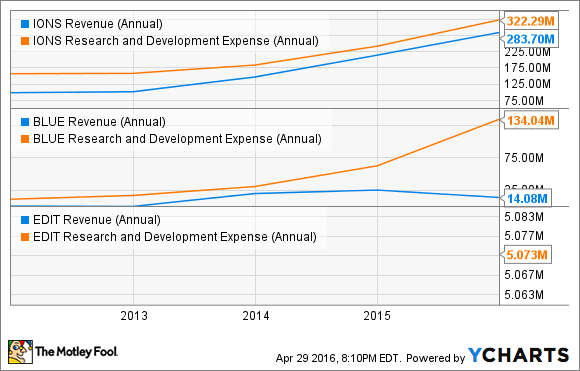 While not yet profitable, Ionis’ annual revenue rose 32% to $283 million last year, and nusinersin could finally push it into profit territory. Bluebird has little revenue to speak of, but a cure for sickle cell disease could bring in billions. While I find Editas Medicine’s technology platform most exciting, it’s in its infancy.

It’s hard to say which of these stocks will perform best in the decades ahead. One thing I can say with confidence: The biotech industry is on the cusp of a gene-fixing cure bonanza.