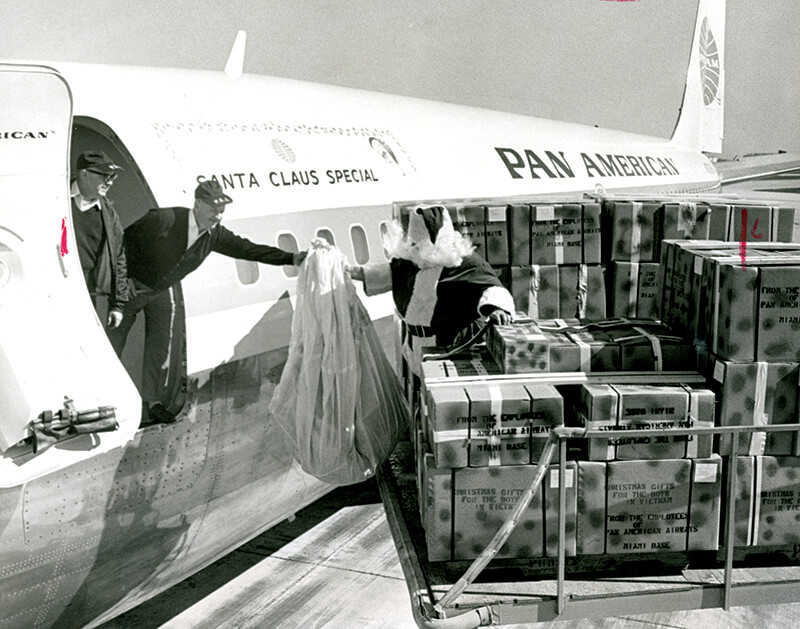 A City for Santa

Besides having memorable nochebuenas (Spanish for “Christmas Eves”) and unforgettable holiday decor, Miami has, for decades, had some of the most outrageous Santas around.

For a better understanding, turn to December 1927. The weather was in the 70s, and unlike traditional Santa Clauses, Miami’s version of St. Nick wore shorts. And instead of traveling by sleigh, Miami’s jolly old elves traveled by boat.

As time progressed, Miami got more creative. One of the most iconic Santas could be found at Burdines. The first neon Santa was lit Nov. 24, 1950, and thousands of local residents gathered for the event. The Santa lighting became quite the annual tradition for the following 10 years. Pictured here, Burdines on Dec. 15, 1953.

While the 1950s were all about the lights, the Pan Am Santa in the ’60s took the cake. Pictured here, Santa loading a Pan Am jet in 1968, in full holiday attire, and the airplane has the words “Santa Claus Special” emblazoned.

Santa has been special to Miami, and in December 1975, he traveled by helicopter—a Sun Line helicopter at that. Instead of being trendy and wearing shorts as the 1920s-era Santa did, this one decided to wear his complete outfit.

Miami has its own holiday traditions that have spanned throughout the decades. Santa is just one of the most unforgettable.↵