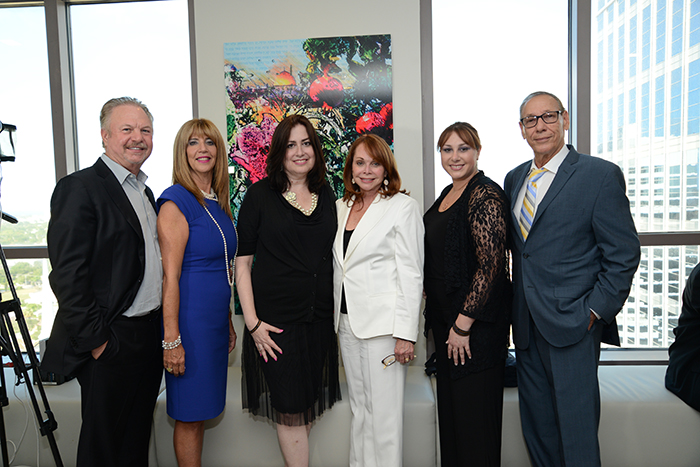 A memorial to a journalist slain by ISIS was one of the highlights of the first art exhibition and reception held by the Greenspoon Marder Foundation.

Steven Sotloff was a South Florida native and American-Israeli journalist who was beheaded by ISIS while on assignment in Syria. The artwork in his memory was unveiled at the exhibition. “This memorial artwork assures that the world never forgets Steven and that the professionalism, determination and strength of this extraordinary young journalist will continue to touch the lives of others for generations to come,” says Gerald Greenspoon, co-managing director of Greenspoon Marder Law. “South Florida has a robust and truly generous arts, education and cultural community, and we’re pleased to support the great work these organizations do for all of us.”

During the reception, artworks for sale lined the walls across four floors of Greenspoon Marder Law’s downtown Fort Lauderdale office. All proceeds went to the nonprofit organizations.

Patriot National (NYSE: PN) has announced three more acquisitions, continuing a string that started after the company’s January IPO. Here are the deals:

Brandywine Insurance Advisors, a specialty insurance brokerage based in the Philadelphia area that focuses on the construction industry.

Patriot National is a national provider of comprehensive technology and outsourcing solutions within the property and casualty marketplace. Its CEO Steve Mariano was profiled in the April 2015 issue of SFBW as an inductee into the Entrepreneur Hall of Fame at Nova Southeastern University’s H. Wayne Huizenga School of Business and Entrepreneurship.

Florida Atlantic University’s Tech Runway has announced four new companies for its business accelerator program. The companies, which are part of Tech Runway’s second class, will receive a $25,000 grant, a 16-week intensive boot camp and a collaborative workspace for a year. They are:

Tone-y-Bands, which brings to market unique arm-toning wrist weights that can be worn throughout the day to provide a workout from regular activities and improve exercise results.

Candidate.Guru, which delivers applications designed to improve the hiring process for companies by using big data and machine learning technologies.

TightTalk Electronics, which created the EarDrive audio recording, transcription and translation solution to work with any audio source.

“These new startups bring innovative ideas and unique solutions to their markets. They’re poised to build on the success of the first class of companies accepted into Tech Runway,” says Kimberly Gramm, associate vice president of FAU Tech Runway, which was profiled in the November 2014 issue of SFBW.

Nostrand was most recently a senior VP at Avison Young Commercial Real Estate, which bought Colliers International in December.

Nostrand’s experience in South Florida real estate dates back to October 1999 when he was director of mortgage and investment banking at Flagler/Codina Real Estate Services. He was CEO of Colliers South Florida from 2005 until the sale in December.

“This is the opportunity of a lifetime to join with two of the most well-respected owners in the commercial real estate business in South Florida and lead the way to producing a new level of growth and success for NAI Miami,” Nostrand says.

BBX Capital Real Estate has cut a deal with billionaire Jeff Greene that gives him 7.2 more acres in the Northwood Village neighborhood of West
Palm Beach.

A February 2015 profile of BBX Capital Real Estate mentioned that BBX (NYSE: BBX) owned a 2.7-acre parcel plus a 4.5-acre parcel with JRG USA. Greene already owned a parcel between those two sites.

“What many characterized as “scratch and dent” assets, we always believed were in fact outstanding opportunities,” says Seth Wise, president of BBX Capital Real Estate. “We are delighted to have been in a position to profitably monetize our legacy portfolio as well as create opportunities with newly acquired assets.”

The national economic reports can seem erratic, but a local survey seems much more optimistic.

The survey by Kaufman Rossin and the Greater Fort Lauderdale Alliance found that 76 percent of respondents said their business is better than it was a year ago. That’s up about 10 percent from the past two annual surveys.

Nine out of 10 expect a healthier business in the coming year and nearly 60 percent expect to increase staff. ?