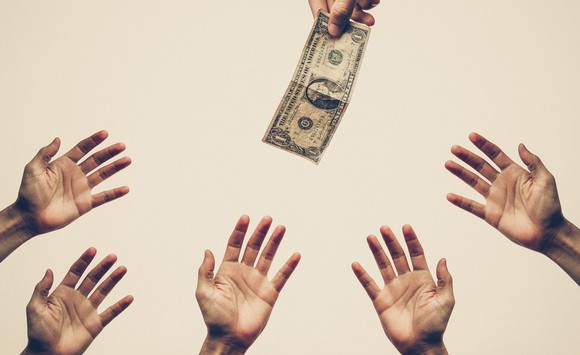 One of the planet’s biggest companies is on track to go public in 2018. When it does, it could be worth more than twice as much as Apple. Even more staggering: It would be more valuable than 13 of the biggest public oil companies combined.

Nearly three-quarters of a trillion dollars. That’s how much Apple Inc. (NASDAQ:AAPL), the world’s current most-valuable, and most-profitable company is worth at recent stock prices. Over the past nearly 20 years, Apple has disrupted and come to dominate multiple industries, changing the way people listen to — and buy — music, use computers, and interact with technology in their everyday lives. It’s not a stretch to say that Apple, if not invented, then perfected, the mobile computing era.

And with its stock trading around 17 times last year’s earnings — a substantial discount to the average P/E of the S&P 500 — there’s a case to be made that the iStuff company is actually undervalued.

But a state-owned behemoth, Saudi Arabian Oil Company, better-known as Saudi Aramco, is set to blow past Apple for the title of world’s most valuable public company when it IPOs in 2018. Expectations are that the market will value Saudi Aramco at $2 trillion or more.

Here’s a closer look at how massive this megacompany, which controls an enormous percentage of the world’s oil, really is, as well as why Saudi Arabia is considering taking it public.

Saudi Aramco’s value is in the oil it controls IN BILLIONS. CHART BY AUTHOR.

The 13 public companies listed on the chart above are some of the biggest in the oil and gas industry. Some, like ExxonMobil(NYSE:XOM) BP (NYSE:BP) Royal Dutch Shell (NYSE:RDS-A)(NYSE:RDS-B), are fully integrated majors with assets across the oil and gas value chain, while others, like Enterprise Products and Phillips 66, are dominant participants in specific parts of the industry, such as transportation, refining, or petrochemical manufacturing. The list also includes Petrobras (NYSE:PBR) and PetroChina (NYSE:PTR), the Brazilian and Chinese state-controlled integrated oil companies.

Combined (red bar in the table above) these 13 public entities are worth $1.5 billion at current share prices. That means Saudi Aramco is expected to be worth $500 billion more when it goes public next year than the next 13 biggest oil companies put together. That’s a baker’s-dozen of the world’s biggest oil companies, plus Microsoft just for good measure.

There are two factors that drive this value: How much oil it produces, and how much it holds the rights to produce. Here’s how Saudi Aramco’s daily oil and gas production compares to the other biggest public producers: 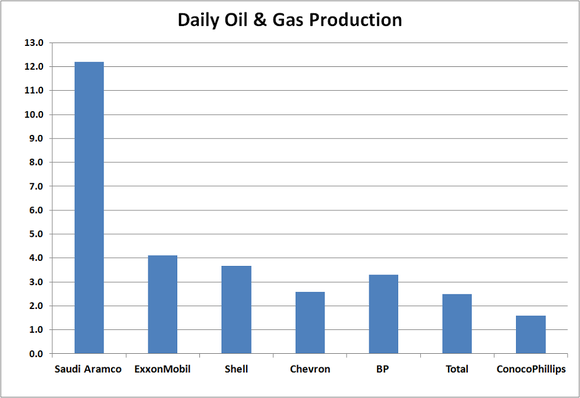 IN MILLIONS OF BARRELS OF OIL EQUIVALENT PER DAY (BOE/D). CHART BY AUTHOR. DATA SOURCE: COMPANY REPORTS AND FILINGS.

At more than 12 million barrels of oil-equivalent per day, Saudi Aramco produces more oil and natural gas than the next three biggest, ExxonMobil, Shell, and BP, combined. 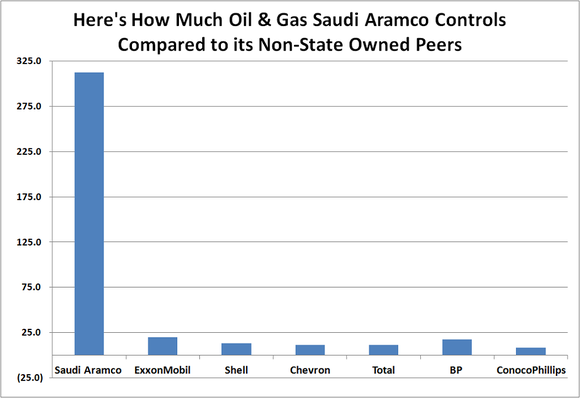 IN BILLIONS OF BARRELS OF OIL EQUIVALENT. CHART BY AUTHOR. DATA SOURCE: COMPANY FILINGS AND WEBSITES.

It would be difficult to overstate just how large Saudi Aramco’s oil and natural gas reserves are as compared to any other oil company’s. Anchored by the massive Ghawar oilfield, the company controls several of the biggest oilfields on the planet, with some of the lowest cash production costs.

To be clear, Aramco doesn’t own Saudi Arabia’s oilfields. Those are Saudi government property. But it does have exclusive production rights, much in the same way other oil companies pay property owners for the rights to access and produce oil and gas.

When Aramco goes public, it is expected to raise more than $100 billion, selling 5% of the company to investors. This would make its IPO easily the largest ever: 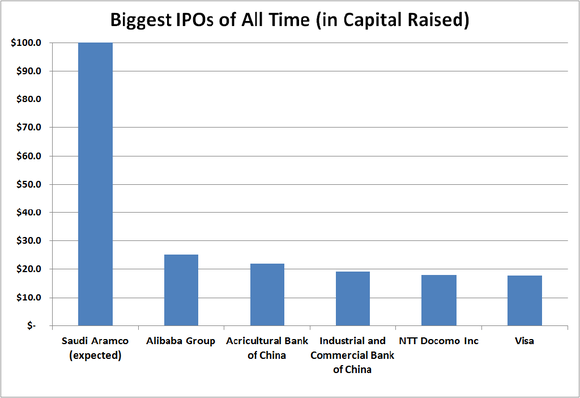 IN BILLIONS. CHART BY AUTHOR.

Aramco’s IPO is expected to raise almost as much capital as the next five biggest, combined.

This is a step toward a “post-oil” Saudi Arabia. Led by Saudi Deputy Crown Prince Mohammed Bin Salman, the Saudi Aramco IPO is part of a bigger initiative — transferring a number of kingdom-owned companies to the kingdom’s sovereign wealth fund as part of its strategy to shift more of the country’s economy away from the oil and gas industry which overwhelmingly dominates it today.

The sovereign wealth fund has already been given stakes in two major Saudi companies: Saudi Basic Industries, one of the world’s largest chemicals manufacturers, and National Commercial Bank, Saudi Arabia’s biggest lender. The plan is for this fund to control $2 trillion in assets, and then use the profits they generate to plant the seeds of economic expansion outside the oil patch.

When Saudi Aramco does go public, it’s almost certainly going to become the biggest public company on earth, and will raise the most capital ever from an IPO.

Should individual investors put its stock on their watch lists? There’s a chance that it could make for a solid income investment, with what are generally considered the world’s lowest cash production costs making its oil production profitable in any environment.

But for a litany reasons, it’s far too early to make that call.

Frankly, there’s a lot investors need to know about Aramco before putting their capital at risk, and it’s far from clear how much of information this ultra-secretive company is going to make available to outsiders. This very well could prevent it from going public on American or European exchanges, where stringent disclosure regulations may require the company to reveal more than the Saudi government is willing to let be made public about its reserves and costs of production.

If that proves to be the case, individual investors should probably take it as a cue to avoid Aramco, no matter how big its oil reserves are, or how cheaply they can be extracted.