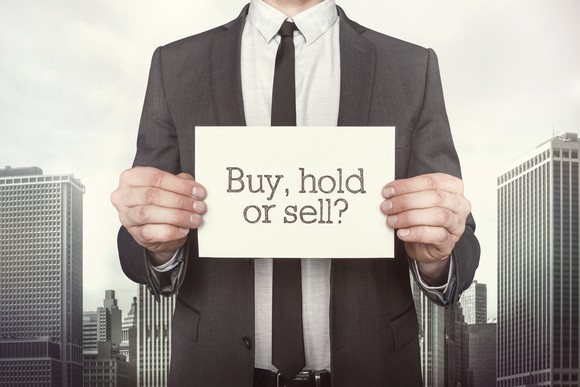 Despite a 21.5% rise in six months, this analyst is still betting on Apple stock — for three key reasons.

Apple (NASDAQ:AAPL) stock has been on quite the tear recently, rising 21.5% in the past six months and easily outperforming the S&P 500’s 5% gain during the same period. After setting a new 52-week high in January, the stock closed Wednesday’s trading session one cent shy of a nice, round $120.

With Apple stock trading higher, is it still a buy? I think so. Here’s why.

Even after Apple stock’s nice increase over the past six months, it still trades at a significant discount. On average, S&P 500 companies have a price-to-earnings ratio of about 25. Apple’s P/E is just 14.4.

In other words, since Apple stock is already priced for the headwinds impeding its growth to stick around, investors have a good chance of earning a meaningful return on their investments over the long haul even if Apple never finds a way to grow its top or bottom line. All Apple has to do is maintain its current levels of profitability.

Of course, there’s good reason for Apple’s conservative valuation. Year-over-year revenue declines in the company’s iPhone segment recently have been weighing heavily on the tech giant’s results. The device accounts for over 60% of the company’s trailing-12-month revenue, so a tough year for iPhone ensures the company’s overall results will suffer, too. 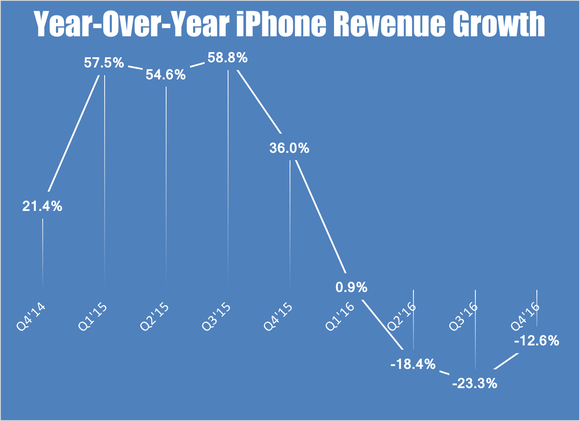 On the other hand, while it makes sense for investors to view this negative trend with skepticism, the doom-and-gloom narratives about Apple’s prospects are overblown. For instance, the release of the iPhone 6 and 6 Plus sparked a monster upgrade cycle for Apple as consumers gobbled up the first iPhone with a phablet-sized screen, which meant Apple’s fiscal 2016 was up against some very tough annual comparisons. Already, Apple is guiding for its year-over-year revenue comparisons to improve in 2017. The company expects its first-quarter revenue to be slightly higher than in the year-ago quarter.

Further, it’s easy to imagine iPhone sales returning to growth when the company overhauls the device’s form factor with its inevitable next redesign — something that could occur as early as this year.

Also, other Apple segments, or even future new products, could surprise the market. The tech giant’s services segment is already looking promising, and investors can take comfort in the fact that any new products would launch to a very loyal customer base thanks to the Apple’s brand power.

3. Apple is a great dividend stock

Last, even if the company struggles to grow its revenue — or even its bottom line — the stock is an excellent dividend investment. Sure, Apple’s dividend yield of 1.9% may not be impressive, but its starts looking tasty when investors consider the company has been increasing the dividend at a rate of about 11% annually, and it is only paying out 23% of its free cash flow in dividends. Going forward, therefore, there’s no reason why Apple couldn’t continue increasing its dividend at a rate of about 11% annually for the foreseeable future. At that rate, Apple’s dividend would double in about 7 years.