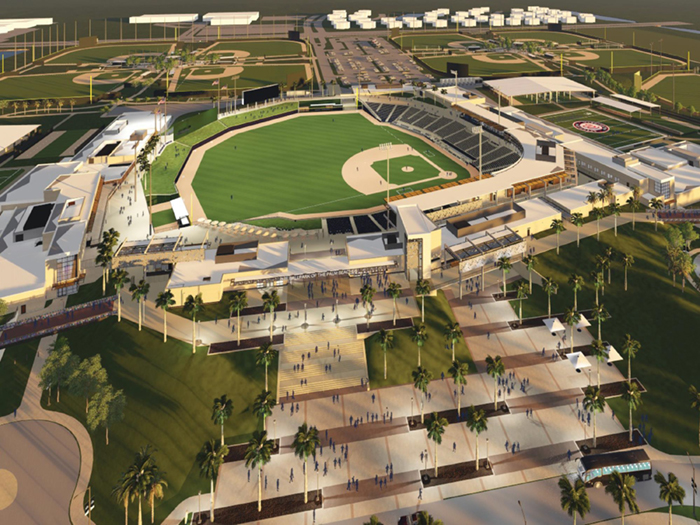 Ballpark of the Palm Beaches emerges as major new venue

Workers are finishing the $148 million Ballpark of the Palm Beaches, which will host the Houston Astros and Washington Nationals during spring training beginning this year.

The Ballpark of the Palm Beaches is transforming a former 160-acre solid waste disposal site into an economic engine—not just from the major league teams but also from amateur teams and other events, such as corporate outings and concerts.

To learn more about the project, SFBW interviewed general manager Brady Ballard, who has a dozen years of experience in professional baseball. He previously was vice president of Historic Dodgertown, an 80-acre multisport facility in Vero Beach.

The following transcript has been edited for clarity and brevity.

A lot of our readers might not be aware of the scale of what you are creating at the Ballpark of the Palm Beaches.

We feel we are like a new landmark in Palm Beach County, which is exciting to see. It’s a two-team spring training facility that’s home to the Astros and Nationals. It’s a 30-year partnership in which the county and the state are funding the facility through special tourism taxes, and then the teams themselves are making the biggest single investment in a major league spring training facility in over 30 years.

There are 13 baseball fields. The stadium has a capacity of 7,500 fans. Each team will have six practice fields. Then we will have five multipurpose fields on the south end.

In addition to that, there’s a 12-acre city park the teams are building and handing over. It will have a lighted basketball court, a splash area, playground and an almost 2-mile walking trail.

What are some of the cutting-edge features fans will find at the stadium?

It is a more-modern layout. It replicates some of the spring training facilities being built in Arizona. The stadium is the centerpiece, so even when you park, you will be walking through practice fields on the way to the stadium. That will give people a unique perspective and a fun environment.

A nice feature is the wraparound concourse. You will be able to walk a path circulating the field without being out of view of the playing field. There will be a grass berm in the outfield with a railing overlooking pitchers warming up. You never have to detach yourself from the action of the game.

What types of dining options will there be?

There will be the typical ballpark fare, such as hamburgers and hot dogs. There will be some country club-type elements with a slightly higher end, a nacho stand where you build your own or get a Philly cheesesteak. Then we will have the suite level and party deck, which are group-related with carving stations and seafood options.

The party decks look like a fun way to watch games.

There are two of them that can host from 30 to up to about 100. It will be kind of an all-you-can-eat type ticket package. You will have your own bar and a variety of seating options whether indoors or outdoors with patio furniture.

Then on the suite level you have a food and drink rail that runs the length of the seating bowl. In the suite you don’t have typical stadium seating—you have a lot of movable nice patio chairs. It’s like opening up your Florida room to the patio.

How are you doing on suite sales?

We have been getting commitments with a lot of business partnerships. There are 15 tickets for a day, but you can add up to 30 tickets. We have single-game and full-year opportunities.

We hope to be a year-round facility that can host destination amateur events, collegiate events and then nonsporting events. We are already talking with concert promoters and festival organizers.

Talk about the economic impact of the project.

You start by looking at just the teams and the hotel rooms, retail and the food they are going to bring about. An article in Institutional Investor gave an estimate of 23,000 room nights for the Marlins and Cardinals in Jupiter. The Palm Beach Classic will generate 4,000 to 5,000 room nights. The article quoted estimates of $58 million in personal income, 12,000 in annualized jobs and $6 million in state and local taxes.

How will businesses be able to use the park and its grounds for hospitality events, luncheons or other business gatherings?

I think we are open to a number of ideas, such as team-building events. We would offer what I would term a kind of playground for activities. The idea is to create a loosen up the tie, leave the suit at home atmosphere. How many people get to come down to the field and take swings? They love the experience of being on the field.

Tell us about your background.

I had a couple of years at Dodgertown in its life after the Dodgers. Among the events we hosted were soccer and lacrosse. We had our own hotel onsite.

Prior to that, I spent 10 years in minor-league baseball in Daytona Beach and Jacksonville. I was general manager for four of the eight years in Daytona Beach at a Chicago Cubs affiliate. I was fortunate to see a lot of the guys who had an impact in the World Series when they were 18 to 20.

I was a student athlete on the baseball team in college, and I played for a year with the Rockford (Illinois) RiverHawks. ↵