Both retailers had a rough 2015, but at least one of them kept sales growing at a steady pace.

Last year was a bad one for most department store chains. Macy’s (NYSE:M) and Nordstrom (NYSE:JWN) were no exception. At Macy’s, adjusted earnings per share slid 14% to $3.77 in fiscal 2015, down from $4.40 a year earlier. The decline would have been even steeper but for some real estate gains that Macy’s recorded last year.

Meanwhile, Nordstrom posted adjusted earnings per share of $3.32 in fiscal 2015, down 11% from $3.72 a year earlier. Given these poor results at Macy’s and Nordstrom, it’s not surprising that both stocks have posted negative total returns of nearly 30% over the past year. 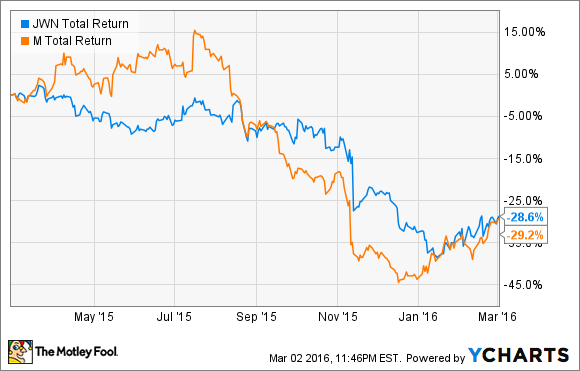 Macy’s and Nordstrom are both working hard to bounce back from this rough performance in the next few years. Which one is more likely to pull off a successful turnaround?

Macy’s slims down
Macy’s is betting on slimming down to improve its financial results. In January, it announced plans to close 36 of its roughly 770 Macy’s stores this spring. It is also generating incremental savings by cutting a few positions in each remaining store, closing a call center, and eliminating some management positions.

Macy’s is closing stores in an attempt to boost profitability. Photo: The Motley Fool.

In short, Macy’s is hunkering down to maximize earnings in a weak sales environment, before hopefully returning to sales growth in 2017. The company expects to post a modest margin improvement in fiscal 2016 despite its projection that comp sales will decline about 1% year over year.

Nevertheless, Macy’s recognizes that it will need comp sales to start growing again to return to the historically high profit margin it achieved in fiscal 2014. To do that, it is investing in its top-performing stores, improving its mobile app, adding Bluemercury and LensCrafters boutiques to certain stores, and even putting off-price sections in some full-line stores.

Nordstrom keeps betting on growth
Nordstrom is implementing some modest cost cuts of its own. However, its main focus is on investing more efficiently to drive future sales growth. A year ago, Nordstrom set a goal of reaching $20 billion in revenue by 2020, up about 50% from 2014, and it is sticking to that plan. This sales growth will allow it to leverage its past investments and rebuild its profit margin.

Nordstrom estimates that strategic growth initiatives, including its entry into Canada, the Trunk Club concierge fashion business, and its investments in building out an off-price e-commerce business cost a total of $140 million last year. That’s equivalent to a roughly $0.50-per-share earnings headwind.

Nordstrom may have expanded too aggressively in the past few years. Photo: The Motley Fool.

These young businesses should eventually mature to profitability. Nordstrom expects them to generate a combined loss of about $110 million in fiscal 2016, with most of the loss coming from Canada. Profitability improvements will probably accelerate thereafter, as Nordstrom Canada will open the last of its initial group of six full-line stores next year.

Nordstrom is also working to improve the profitability of the Nordstrom.com site. Management has tacitly acknowledged that it has been overly focused on growth rather than e-commerce profitability in recent years. Now, Nordstrom is looking to reduce its shipping costs while removing items that aren’t profitable to sell online.

Some analysts have warned that Nordstrom’s increased focus on e-commerce has permanently reduced its margin structure. That’s probably true — but the pendulum has swung too far. In fiscal 2010, Nordstrom’s retail operating margin was 11.5%. By fiscal 2015, that was down to 6.9%, excluding impairment charges.

As Nordstrom’s investments mature over the next several years, its retail operating margin should bounce back. Even if the previous peak is now out of reach, a 10% long-term operating margin seems plausible. That represents a huge profit improvement opportunity.

Nordstrom is in better shape — but there’s a catch
Overall, Nordstrom seems more likely to make a full recovery than Macy’s. Much of its margin decline over the past few years has resulted from a deliberate long-term investment plan.

While growth slowed somewhat in the past two quarters, there’s no doubt that Nordstrom’s investments are paying off — the company’s retail sales rose 7.5% year over year in 2015. Nordstrom just needs to recalibrate its investments to maximize profitability. By contrast, Macy’s is facing significant sales erosion, which could be hard to reverse.

However, even if Macy’s doesn’t make a full recovery, its shareholders could still do well. The company is finally focused on monetizing some of its vast real estate portfolio, which could potentially free up billions of dollars of cash for dividends and share buybacks. Macy’s real estate holdings thus represent a valuable parachute for investors in case the retail business struggles to return to growth.

3 companies poised to explode when cable dies
Cable is dying. And there are 3 stocks that are poised to explode when this faltering $2.2 trillion industry finally bites the dust. Just like newspaper publishers, telephone utilities, stockbrokers, record companies, bookstores, travel agencies, and big box retailers did when the Internet swept away their business models. And when cable falters, you don’t want to miss out on these 3 companies that are positioned to benefit. Click here for their names. Hint: They’re not the ones you’d think!

Adam Levine-Weinberg owns shares of Macy’s, and Nordstrom. The Motley Fool recommends Nordstrom. Try any of our Foolish newsletter services free for 30 days. We Fools may not all hold the same opinions, but we all believe that considering a diverse range of insights makes us better investors. The Motley Fool has a disclosure policy.