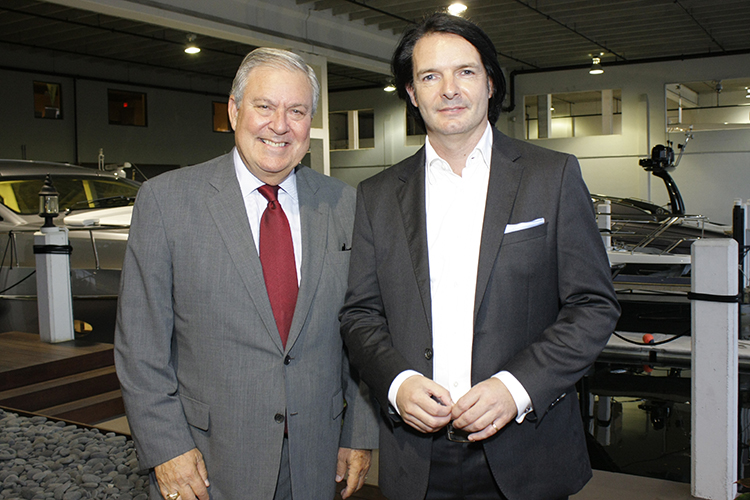 The marine industry is a top industry in the Fort Lauderdale area, rivaling tourism by generating nearly 100,000 jobs and more than $10 billion in total economic impact to the area.  The event was held at Ferretti Group America’s Fort Lauderdale showroom just before the Fort Lauderdale International Boat, which celebrated its 55th year. Since 1976, the show has been managed and produced by Show Management, which became a subsidiary of Active Interest Media in 2006.

Zimbalist was interviewed by SFBW Publisher and Editor-in-Chief Kevin Gale. The following transcript has been edited for clarity and brevity.

You have quite a family. Tell us a little bit about them.

My grandfather, Efrem Zimbalist, was among the top two or three violinists in the world from about 1917 until about 1940. He was born in Russia and started playing violin at the age of three. He was the first violin in the orchestra in Rostov at age seven and won the competition as the best violinist in his illustrious school in St. Petersburg when he was 17. He went to Berlin gave a recital and after that was booked around the world for the next 30 or 40 years.

He married my grandmother Alma Gluck, who was the real rock star in the family.  She was an opera singer and known for singing in the Met, Bolshoi and all over the world. She’s the first human being to sell a million copies of any one record – “Carry me back to Old Virginny.”

My father, Efrem Zimbalist Jr., was an actor; his parents wanted him to be an engineer because they didn’t think that acting was a very respectable profession. After he flunked out of Yale for the second time, he went down in New York and worked as a page in NBC and then went into World War II and fought in the infantry and got a Purple Heart. He went on to do 77 Sunset Strip and then the FBI.

People say it must have been wild and crazy growing up in Hollywood and parts of it were – you know Dean Martin lived over here and Frank Sinatra’s widow over here and Clark Gable lived there.

But my dad’s idea of a really fun weekend was to fix the gate or to paint the bar or something like that. It rubbed off on all of his children who are I think are kind of the same.

On my mother’s side, my grandfather was a career navy officer – hence the name Skip he called me – and ran convoy protection during World War I and ran the Brooklyn Navy yard during World War II and then ended up retiring as an admiral.

Tell us about AIM and how it relates to Show Management.

They also had a magazine group and I came to do strategic planning, mergers and acquisitions and eventually was asked to run the magazine group, which includes Yachting magazine, Salt Water Sportsman, Popular Science, Field and Stream and Outdoor Life. I grew to love the special interest magazine business. I also saw the power of when events and print media work together.

I came down to Fort Lauderdale and it blew my mind because in most sports the shows are much smaller than the magazines and that’s not true in the marine world or in the aviation world. And I said, “Wow, you know if I ever do my own thing this is something that would be fantastic.”

Are there really a lot of boats sold during the show and how does that aspect work?

If you go back to the “70s and “80s the boats were actually sold at the show. If you fast forward to today, you have to look, especially with the larger boats, forward three to sometimes six months to really calculate it. There are a number of local manufacturers, by that I mean in the Southeast, who will have done 30 percent of their business at the Fort Lauderdale boat show. You’ll have lots of companies that will do a $100 million worth of business at the Fort Lauderdale boat show.

So how’s the show grown to be the largest in the world?

It started off with 13 boats and it’s grown to over a thousand boats – counting all of the ones in the convention center on land it’s probably 1,200 or 1,300 boats.

The thing that really made the difference was to move it from a spring show to a fall show.  It moved sites, but it ended with Bahia Mar as the center. Those two things I think were the catalysts.

This show is kind of in the middle as boats are transitioning from Europe to the Caribbean. This was an ideal spot for them to show their boats to get charters and to get sales. The other thing that happened was shipyards grew up as the show grew. This became a great place to get work done on boats.

What can the business community do to help support the boat show and maybe the industry in general?

The business community needs to vote with their influence and their dollars and their persuasion to make sure the infrastructure that makes the boat show possible and the marine industry possible survives.

To get the biggest boats, we need the channels going down the coast and those fill up periodically. They need to be dredged to 15 to 18 feet, not just down center of the channel but off to the various marinas and yards.

That’s been a real problem getting that done. It’s been a problem financially because people say, “These are bunch of fat cats, who, you know they can pay for it themselves.”

There are 100,000 jobs in Florida supported by this industry and every time one of these boats moors, it’s $20,000 to $100,000 to fill it up with fuel. There’s the flooring, the propeller shops, provisions, carpenters, the cleaners, the painters – all these people that support it. These yachts are not toys – they’re companies, they’re industries that employ a lot of people.

Another part of it is just real estate – making sure that we have access to the ocean. We don’t want to use up all of our access points and marinas with real estate development that takes away slips for yachts and super yachts.

The third thing is probably the most critical – skills. We need to train staff, workers to do the carpentry, to do the metal work, to do the paint work, to do all of the things that it takes to maintain, produce and operate these beautiful creatures. And, you know they’re not naturally coming out of high schools and trade schools.

The boat show has been around for 55 years, so how do you keep it relevant and cutting edge?

We do a survey every year of exhibitors and attendees. We pay a lot of attention to what they say and they don’t pull any punches.

When we talk to consumers, we ask them what’s the No. 1 reason you come to the boat show and they say to buy a boat or to look at prices or see new models. Those are all in the top five. The No. 1 reason is to have fun.

We’ve tried to keep it fresh and keep new things happening. The best thing that makes it relevant is exhibitors who are showing beautiful designs and new products whether it be yachts or the accessories or engines. Our part is to make sure that we’re providing an environment that is world class and is fun and is luxurious and that is conducive to people coming from all over the world and having a good time.

So what’s your biggest worry, what could go wrong?

The weather is always a worry at this particular show and we’ve moved it a week later just for that because we’re at the tail end for hurricane season on the bell curve and every week that you move it reduces the chances.

The third worry is people who are denigrating successful people who have the funds to buy, whether it’s a 20-footer or 200-footer – that they are the 1 percent and somehow not good. It’s very unhealthy not just for our industry but for our country and I hope that stops soon. ?