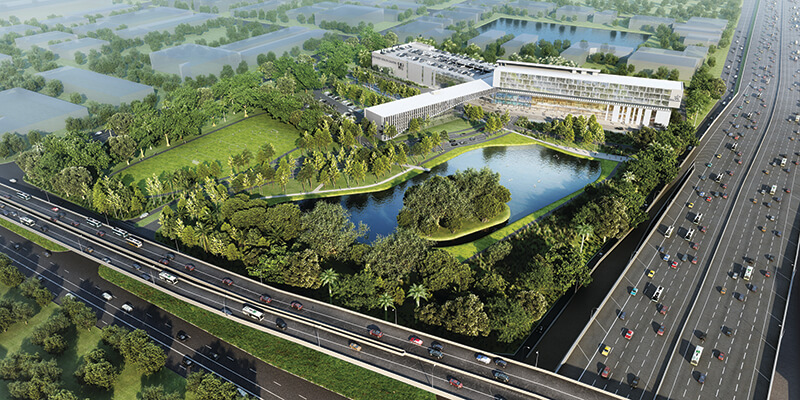 Birth of a Business Epicenter

Doral is a microcosm of why South Florida is an economic powerhouse.

It’s home to the world’s largest cruise company, a Fortune 500 logistics company, Miami’s daily newspaper, international television networks and one of the nation’s most-prominent clothing companies. It’s evolving from a commuter city, with more than 150,000 workers and 58,000 residents, to a well-rounded live-work-play city.

Doral’s roots go back to the late 1950s, when Doris and Alfred Kaskel bought 2,400 acres of swamp land for $49,000 with plans to build a golf course and hotel. The city’s name comes from the first syllables of their first names.

It took a long time for voters to approve Doral’s incorporation as a city, finally in January 2003. By then, its central location in Miami-Dade County—a mile from Miami International Airport—had already made it a thriving business area.

Carnival Cruise Lines was founded in 1972 and has been in Doral since the late ’80s.

“With so many [Carnival] employees spread out across Miami-Dade and Broward counties, Doral provided a convenient, centrally located location for its personnel, not to mention ample space to build and expand,” says Carnival public relations manager Vance Gulliksen.

Carnival is the world’s largest cruise company with 10 brands and 100 vessels.

Ryder System is one of the nation’s largest logistics companies, with $6.79 billion in annual revenue. The company considered 22 potential headquarters sites in South Florida before moving in 2005 from downtown Doral to a location along the Florida Turnpike.

“We currently operate one Ryder shop, one used-truck center, as well as a 100,000-plus-square-foot customer warehouse operation, in addition to having our HQ building in Doral,” says Claudia Panfil, Ryder’s vice president of corporate communications.

The American Welding Society, a nonprofit technical association with 77,000 members, chose Doral as its headquarters in 2010 after outgrowing its space on Le Jeune Road in Miami.

The site-selection committee looked at the ZIP codes of employees’ home addresses to find a central location. “When we plotted it out, it turned out Doral was the ideal place for us,” says CEO Matt Miller.

Proximity to MIA long has made Doral a vibrant logistics and import/export center. Doral is particularly known as an epicenter for electronics and tile.

It’s nearly impossible to find a 47-acre site like that in western Miami-Dade County, says Ford Gibson, managing director for Foundry and the free trade zone. Its 17 acres of raw land could accommodate 1 million square feet of Class A office space.

The free zone status allows the import and export of products without having to pay duties and tariffs. Many tenants like the strict security at the FTZ, Gibson says.

“If you look at per-capita income and growth and livability, Doral ranks up there—if not at the top, then one of the top locations in country,” Gibson says. CityPlace and Codina’s Downtown Doral have added vitality and a restaurant scene.

Like Foundry, Rialto Capital Management found a diamond in the rough in Doral—the 278,000-square-foot Doral Corporate Center, which it bought in 2016.

The two buildings, which were developed in 1985 and 1990, were designed with seven-story and three-story atriums, says Ryan Meehan, a vice president with Rialto. However, the company wanted to strengthen its Class A position and last year started a $1 million renovation that includes new flooring, wall coverings and wood veneer in the lobby. Tenants include Citibank, New York Life and the Pension Benefit Guarantee Corp.

Doral is an affordable option with average leasing rates of $34 a square foot, compared to the $50s and $60s on Brickell Avenue, Meehan says. The corporate center is 86-percent leased but does have available spaces that range from 1,500 square feet to a full floor of 22,000 square feet.

Over two years, the building was leased up to 95 percent occupancy, with tenants that include Univision, West Coast University and Prestige Health Choice.

Doral has about 250 multinational and 300 corporate headquarters, which is “an unbelievable, diverse bunch of companies,” he says.

Doral has turned into a media hub with offices for the Miami Herald, Univision and CBS Miami (WFOR-Channel 4).

“Our staff ensure that currency that is worn and possibly counterfeit is removed from circulation. They receive and prepare orders of currency for local and international depository institutions,” says bank media relations officer Jean Tate. The branch also has a museum and staff members who gather local economic data.

One thing missing in Doral has been a hospital, but that’s poised to change.

Laura Hunter, Jackson’s senior vice president of business development, hopes to get final approval for the hospital and begin construction by the end of March, with occupancy at the beginning of 2020. k