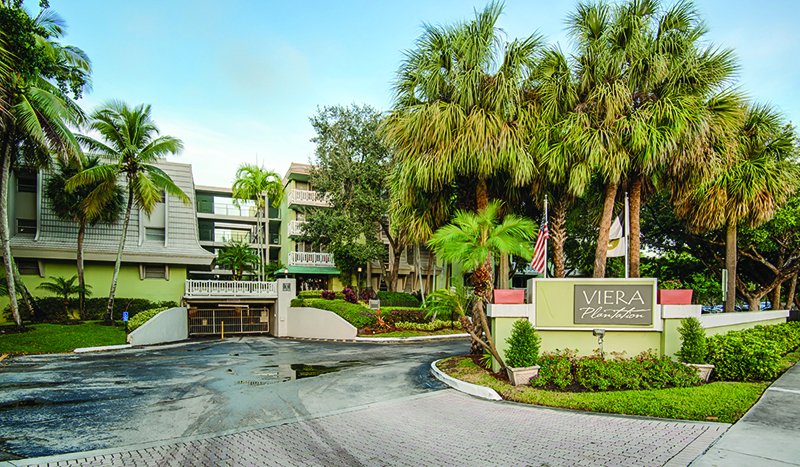 Starting a real estate business during the meltdown in 2009 might sound counterintuitive, but it worked well for Michael Stein and Pensam Capital.

He and two partners started with a 1,000-square-foot office in Miami’s Brickell area, seizing on opportunities in the distressed-debt field. Now, the firm has arms in the real estate funding field, owns and manages multifamily housing, and develops projects.

Stein was used to hard knocks, as he started out as a broker with Coldwell Banker when it was part of Sears. He pounded away on the telephone, calling apartment owners trying to get listings, and became one of Coldwell Banker’s top commercial housing officers. He later realized there was more money to be made as a principal and joined Miami’s Aztec Group, where he added roles as a mortgage banker and started putting his own capital in deals. During his 10 years at Aztec, he estimates he put together more than $1 billion in deals across a broad array of assets.

Stein was able to launch his business because of strong years before the recession doing fee-for-service work and selling properties.

“I had the good fortune and luxury in 2008 of reinventing myself and really making the transition from sort of a hybrid broker-principal to purely a principal,” he says. He started Pensam with two partners from Cidel Financial Group, Gavin Beekman and Joe Ackerman.

They initially focused on clients needing liquidity in the distressed real estate market. Many clients needed one- to two-year bridge loans. The partners injected capital themselves and from friends and families. They made a lot of loans in the $1 million to $5 million range.

“We felt starting that way we would see a lot of deal flow and opportunities,” Stein says. They did more than 50 loans over an eight-year span.

They also bought distressed notes on two multifamily properties in Sunrise and Orlando, which were late-stage foreclosures with summary judgments. They took over the properties, which turned into a multifamily real estate business.

“We were not the bad guys who blew out the sponsor. Our bridge-lending business mentality then and today is never a loan-to-own mentality. It’s always a means of providing capital to good sponsors that are transitioning a property,” Stein says.

Stein reached out to a longtime associate, Harry Bookey, founder and chairman of BH Management Services, whom he met when he was at Coldwell Banker.

“He was a small apartment operator from Iowa that was buying deals in Texas and Florida. Throughout the ’90s and 2000s, I invested with Harry in apartment deals,” Stein says.

Under a strategic partnership, Pensam’s partners invested in BH. It worked, given that BH is one of the nation’s top 15 largest multifamily property managers with 70,000 units in 15 states, Stein says.

That allows Pensam to be an owner/operator rather than someone who just makes passive investments in property.

Pensam Residential has about 15,000 units at 45 properties in approximately 15 states, Stein says.

While the initial properties in Sunrise and Orlando were Class C, they now own predominantly Class A and B properties.

“It’s one we have done a substantial amount of repositioning through renovations and rebranding and really updating the physical plant plus the resident profile,” Stein says.

One of Pensam Residential’s biggest undertakings is a $30 million project to rebrand The Breakers Resort, an apartment complex in Denver that has 1,523 units in six villages that include a 26,000-square-foot recreation center and Lake Windsor.

The first step, announced in March, was a new name: Tava Waters. Tava is the Ute Indians’ name for Pikes Peak, and the Waters part of the name reflects lakeside living.

“That’s a prime example of properties where we are going to have renters by choice not renters by need—people who want to have an extraordinary lifestyle with an amenity package they would find at a high-end country club,” Stein says.

Pensam engaged G5, a Bend, Oregon, digital marketing company, to lead the refreshing of the brand. Pensam typically takes a hands-on approach to set the vision for properties with in-house design and architecture and marketing strategy.

Each property is akin to a boutique hotel with a focus on the residents’ experience, Stein says. Pensam likes to use technology so tenants may use their phones to pay the rent and control lights and thermostats.

Pensam has about 40 millennials in its office, which mirrors the demographics of many of its residents and helps it keep up with technology, Stein says.

Pensam’s investor base is diversified with ultrahigh net worth individuals and family offices taking a long-term, generational approach to wealth investing, Stein says. It’s not a buy-and-flip strategy.

“One might argue that, at this point in the cycle, you might sell everything and retire. But our strategy is to build a company that can withstand the cycle and has longevity into the future so the young people in the organization can build something that’s sustainable,” Stein says.

About three years ago, Pensam started a new business line involving preferred equity, which is between senior debt and common equity in the multifamily property space. It has achieved the status of select preferred equity provider for Freddie Mac and Fannie Mae, which is hard to get, and invested in 10,000 units.

That business line is focused on yield and typically has three- to seven-year time frames. Stein describes the investments as similar to mezzanine loans, but structured as preferred equity with a cap on returns. “The philosophy is to invest capital with good people with solid business plans where we can see an exit. We can be taken out after they execute their business plan,” Stein says.

In event of default, Pensam has an easier transition because it’s already part of the ownership group. It can provide notice to the lender that it is taking over management.

About two years ago, Pensam entered the development field. It has completed two multifamily projects in Lake Jackson, Texas, and has more in the works.

The objective is to use capital in special situations where a developer has put together a compelling development deal but needs capital to get moving. Stein described it as a co-development approach, where the developer needs a credit enhancement or capital to get the big construction loan. The demand at this part of the development cycle is huge, but Pensam is selective about where and when it invests, he says.

With interest rates moving up, Stein says there is quite a bit of risk in development. One strategy is to look at properties where it already owns the land and can add on to existing properties.

Overall, though, Stein sees rising interest rates as being good for Pensam. For starters, that slows down home purchases, which helps the rental market. It also takes out marginal investors, who just play the spread between cap rates and interest rates.

Rising rates also tends to make senior debt ratios go down, which creates opportunities for Pensam to provide equity to fill the gap. Borrowers may have floating rates, but not Pensam.

“We are fixed-rate borrowers, so our rate is locked in,” Stein says. “Rates will inch up conservatively and modestly. We are not overly concerned with what’s going on with rates.” ↵

• Pensam Residential: A fully integrated multihousing owner and operator that manages garden, mid-rise and other properties in markets across the United States.