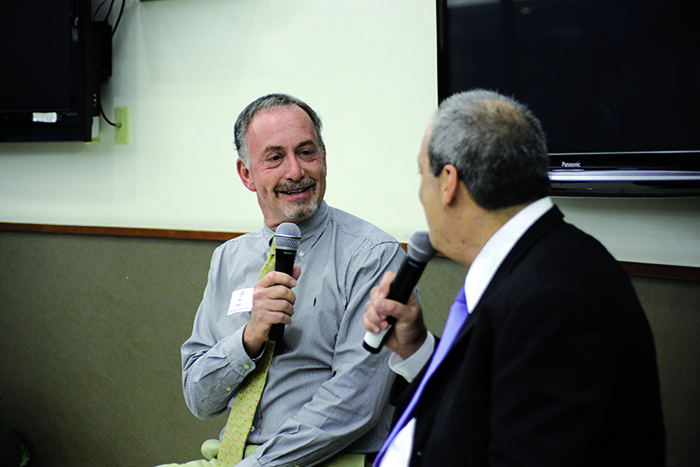 Merin was interviewed by SFBW Chairman and Publisher Gary Press as part of the SFBW CEO Connect series, which was held at JM Lexus in Margate.

What follows is an edited transcript.

Tell us about when you moved here.

He said, “Oh, no, I don’t need you for three months.” So three months came, I packed up my mother’s old station wagon with everything I owned except my dog. I drove down here for $15 more a week.

When I got to West Palm Beach, I asked myself, “What did I do?” because it was August and nobody was here. But it turned out for the better.

I started my own firm in 1982; nine years later, I merged it in with the Hunter and Codman companies, out of Boston and Kansas City, respectively. In 2001, I bought out the Codman interest. And I am pleased to announce that 30 days ago, I bought out my longtime partners in Kansas City. Now, we’re all 100 percent locally owned.

We want to talk about foreign investors. Do they have equal interest in the three South Florida counties?

First of all, in Miami-Dade, when you talk about foreign investors, you immediately think of South America. You have to understand that Miami is the capital of South America. It’s neutral. Whether you’re Venezuelan or Brazilian, Miami’s still Miami. People speak your language and your bankers are there.

So Miami’s been on their radar. What’s interesting is that Miami is now on the radar of other international investors. The people who come and hang out at Art Basel are from Germany and Spain and even that far away country of East Hampton or Southampton, New York.

Miami’s taken on a different international level. The rest of South Florida is not as attuned, not as open to foreign investors. They don’t understand it. They don’t go for it. The people don’t speak their language.

What’s the trend for cap rates on commercial properties? Some investors feel that they’re being squeezed out.

Right now, the fact that people can borrow money at 4 percent means that they can buy property at 6 percent or the lesser terms, leveraging, and they’re going to get a 10 percent cash-on-cash return. There will come a point where real estate values on a cap rate level will start to go down as cap rates go up, plus interest rates. But we’re also in a market where we’ve had no new construction of office buildings or shopping centers. We’re starting to fill them all up and rents are starting to roll in really fast.

The real estate will not go dead. It will stay even or go up because the rent’s going up, there’s more income.

I have been reading a lot about the apartment rental market down here. The rental rates are skyrocketing.

They went up about 5.1 percent last year throughout South Florida – way more than home prices did. They’re projected to go up 8.3 percent this year.

My son moved to Plantation and he couldn’t find a one-bedroom. That’s how tight the market is. He came out to see me last week and said, “Dad, I think I’m going to buy something because they’re going to raise my rent 10 percent.”

There’s all this talk about the millennials not wanting to lock themselves into home ownership. As soon as it gets to the inversion point – “Dad, it’s cheaper to buy a 3/2” – that will change. So, there is a demand cap on rental apartments.

I was just looking at the numbers of the University of Florida Bureau of Economic Business Research. Between 2015 and 2030, a projected 2.1 million baby boomers will move to Florida. That’s over 15 years – that’s a lot of housing. But they’re also projecting that the next big group to move to Florida for the next 15 years at 1.3 million will be millennials.

You need to look at what’s going to happen in South Florida in the next 24 to 36 months: You’re going to see explosive growth in residential housing development. It’s pent up. The demand is there, but the supply has dwindled. Palm Beach County has less than a five-month supply of houses for sale and the normal average is six months in any market in the United States.

We’re seeing more hedge fund companies moving down here. What do you see going on?

We latched onto this four years ago because a number of hedge funds were investors with us. I was with a client that I moved from Greenwich, Connecticut, to West Palm Beach in February. He has 8,000 square feet overlooking the Intracoastal for himself, his partner and four secretaries. I said, “Where’s everybody else? There were 20,000 square feet in Greenwich.”

He said, “We put our accounting department in Oklahoma City because we own some property there. We sourced out our traders to the back-office operations. I love it here. I can look out the window and I see my yacht and my house – and my Bentley is parked downstairs. The weather’s really nice and, you know, I saved $140 million in income tax by moving here.”

What happened is these people are coming here, but they’re not bringing the size and employment that they’re leaving behind.

Tell me what makes you different than another CEO.

I don’t know what makes me different – maybe it’s what drives me: fear. My fear is becoming irrelevant. I don’t fear not making a deal. I don’t fear losing some business.

Have biotechs paid off for us?

Here’s where you get the non-politically correct answer because I’ve not been a huge proponent of the expenditures and the speed with which we rushed into life science. The state of Florida and Palm Beach County combined have spent over $1 billion. The good news is that it has put us on the map. It has made Florida a contender for life science business, which is a very, very future-oriented business.

The problem? In Palm Beach County, we built the model on a 20th-century, 1950-1970 model, where everybody was physically close together. In the 21st century, thanks to the Internet and the speed of communication, we have bioscience and life science groups scattered from Tampa all the way down to Miami.

So, we are a player. One of the things we’ve been lacking is venture capital to get the startups going. Maybe that’ll change with the hedge funds coming.

When we look at office space, are there trends showing how more employees are working from their homes? And do you think that’s going to be a trend over the next five, 10 years?

Working from home has been over-talked about – you can ask anybody who’s worked from home. They still want to go back into an office. They may not want to go 9 to 5. They want to have some flexible hours. But since the generation will demand it, we will do it. I already do it. I’m a millennial, I guess, in that sense.

In real estate, there is a change in the physical configuration of offices. The window offices around the perimeter with the bullpen in the middle is gone. If you’re doing that, you can’t get the young people to come and work for you. They want interaction. They want a space that doesn’t look like an office. They want a common coffee bar. They want amenities.

We’ve got a lot of 1980-1990 office buildings; eventually, we’re going to have to start deconstructing the interiors of some of those and make them more attractive.

Is the transit-oriented devel�opment (TOD) planned for downtown West Palm Beach a risky venture when it comes to filling the space? What are your thoughts about TOD in general?

TOD is a magnificent model, and it’s not a new model. I grew up in a little town on Long Island called Great Neck, which was on the Long Island Railroad. The town literally grew out from that railroad station. That model has been all over the United States.

Now, we’re particularly talking about Florida and places like California and Arizona, where we built cities after the war with a lot of roads to get people around, but they didn’t have centers. TOD will help us strengthen our urban boundaries. It’ll make them easier to work in and to play in. It

I don’t think it’s going to reverse the total trend of people moving to the suburbs. I don’t care how much you say you’re a city dweller, when your second kid is born, you need room for the swing set.

I think that Mike Massanoff’s project is ambitious, but 300,000 square feet of office space there and another 400,000 a mile away may be difficult.

West Palm Beach is not as big as Miami. Miami built three 1-million-square-foot buildings right at the beginning of the recession and is finally filling them six years later. You build a million feet in West Palm Beach and it could take 10 years to fill it.

Audience question: The Black’stone Group is selling the Boca Raton Resort & Club and putting part of its funds into the strip malls in Florida. I’d like your thoughts on that.

Don’t focus on Blackstone, because they do everything. They have so much money that they have to try everything that they can. After the last three years, they built a large industrial portfolio and sold it to the Chinese.

E-commerce is having a very large impact particularly on the larger boxes. We’re seeing Best Buy shrink down to the smaller boxes, as already seen with Office Depot and Staples. On the other hand, there’s a trend toward more personalized services. As people’s disposable income is getting a little better, not everybody’s looking for the Wal-Mart experience.

We’re starting to see some expansion, whether it’s an ice cream shop or a dressmaker. It’s not your national chains. Remember, the other part of that is the 5.5 million people moving to Florida in the next 15 years. They’re going to have needs, whether it’s the State Farm insurance agent that takes up the space of a soft-goods merchant. I think that we have opportunity to fill what we have, over time.

We also have some other very exciting types of retail like the American Dream mall in western Dade County. Look at the expansion of Sawgrass Mills. You’ve got a lot of lifestyle centers, like CityPlace in West Palm Beach and Mizner Park. People go for the experiences. It’s socialization. So in that regard, I think that there’s some health in the retail industry.

Is there a trend in multifamily buildings with no parking and will it continue?

It will in Miami Beach and maybe in parts of Miami. The apartments that are selling in Miami Beach right now are selling to New Yorkers and Londoners and people from Madrid, and they’re probably a fourth, fifth or sixth residence. These are selling for $2,000 or $2,500 a square foot, which is the price of Manhattan real estate – and you don’t get parking in Manhattan when you buy. So maybe they’re just used to it. Maybe they come down in their jet and their limo drives them over to South Beach.

I don’t think it’s necessarily a trend. You can’t get on the subway and go uptown in Florida, right? ?