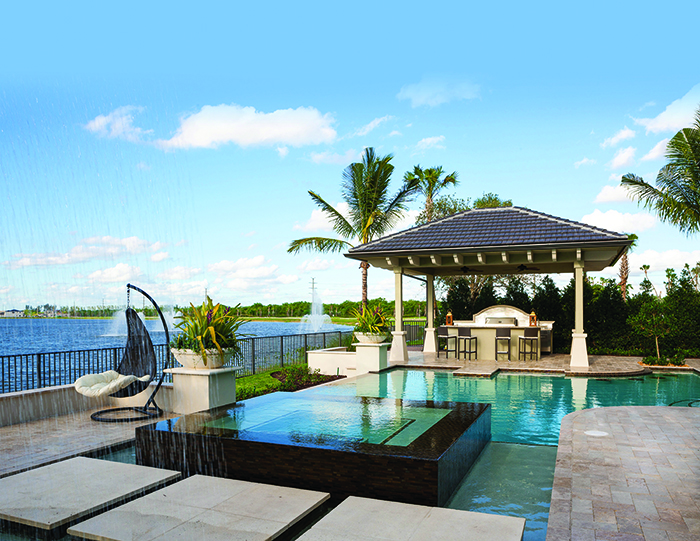 The cows are still grazing in the fields near Hillsboro Boulevard and University Drive, but new homes in the distance show change is coming rapidly.

Two of the nation’s largest developers are in full swing in what’s known as the Wedge or the Golden Triangle, which many call the last of the big developable areas in Broward County.

The first residents are moving into Lennar’s MiraLago and Standard Pacific’s Watercrest, which have 140 acres, plus lakes and expansive clubhouses as the centerpiece of their designs.
Sales are strong enough that both developers are planning new additions.

While buying a home in Parkland is often about picking an area with the right schools, the upcoming Parkland Royale calls for 538 single-family homes for the 55+ plus crowd.

Several events combine to make the Wedge unique among developable areas in South Florida. Until 2009, it was part of Palm Beach County – cut off from the rest of the county by the Hillsboro Canal, which runs along Loxahatchee Road.

“I don’t know how it would have gotten developed. It was landlocked,” says Realtor Gina Stephens who is on Parkland’s planning and zoning board.

The Wedge development could only be reached from Palm Beach County by entering through streets in Broward County. Residents of west Boca Raton weren’t keen to see University Drive bridging the canal and bringing more traffic into their neighborhoods.

“Parkland was going to bear the impact of development out there,” says Parkland Mayor Michael Udine.

The solution was to transfer 1,949 acres into Broward. The timing turned out to be good as the Great Recession faded away and buyers showed an appetite for new construction. There were few large parcels left in the county, says Louis Degasperis, who has experience in marketing residential communities as president of Dega Advertising.

“Usually there were 30 homes here or a parcel there. These vast tracts of land were gone until the Golden Triangle happened,” he says.

Kathy Schroeder, a Realtor with Berkshire Hathaway HomeServices Florida Realty, says buyers like having a new home built to the most current building standards.

The impact glass that helps lower costs of windstorm insurance also boosts energy efficiency and deters burglars, although Parkland is known for one of the region’s lowest crime rates.

Part of the Wedge acreage, including MiraLago and Watercrest, has been annexed into Parkland and the rest is expected to follow over time. There is still an abundance of raw land left, including the 401-acre Bishops Pit site near the end of Loxahatchee Road and the 715 acres owned by CW Hendrix Farms, which runs along the east side of University Drive and then north to Loxahatchee Road. Bishops Pit is owned by WCI, the developer of Heron Bay, which is already making inquiries about annexation, Mayor Udine says.

“That area is providing a lot of tax revenue for the city and county and school board,” says Mayor Udine. “It is being built out in a very aesthetically pleasing way.”

A big question has been whether kids will be bussed to distant schools.

Mayor Udine noted the donation of two school sites and says, “We would like to see the school board move more rapidly to get a school built out there.”

The city has also agreed to contribute up to $2 million for modular classrooms.

Carlos Gonzalez, president of the Southeast Florida Division of Lennar, said,  “We have made considerable contributions, including land, and have gone above and beyond our requirements to ensure that our resident students attend school in Parkland.”

The Coach Moves In

Marjory Stoneman Douglas head football coach Willis May, who recently moved from Heron Bay to MiraLago, is renting a home about five minutes from the high school.

“We just liked the houses they were building and the area being out away from everything a little bit,” Willis says. “It probably won’t be that way for long. It’s developing and there will be a lot of new houses here.”

One of his assistants told him how in 1993 there was a still a dirt road near the site of the high school.

“Now you got Heron Bay and all the other subdivisions down University to Holmberg Road. I guess we’re the furthest out. It just keeps creeping into the Everglades,” he says.

Indeed, the end of Loxahatchee Road is the start of the Everglades at the Arthur Marshall Loxahatchee Wildlife Refuge. Stephens says development of the Wedge will help make Parkland more interconnected by eventually extending Hillsboro Boulevard east of University Drive. Currently, residents in areas such as Heron Bay have to drive down to Holmberg Road to reach parks on the east side of the city. Extending University Drive north to Loxahatchee Road will also provide a new way to get to U.S. 441.

Nanette Plescia, area sales manager for Lennar, says the MiraLago site was “one of the last remaining prime, prime opportunities” in Broward County. It’s turned into one of the Miami company’s premiere developments with a 24,000-square-foot clubhouse, she says.

A second phase of MiraLago on the west side of Nob Hill Road will be connected by an underpass for pedestrians and bicyclists. The MiraLago lake is irregularly shaped with a lot of peninsulas, which provides for an intimate feeling in the neighborhoods, Plescia says.

“One thing we are enjoying the most is a sense of family with most of the people moving in at the same time. They are in the same boat,” says Steve Duchin, who moved to MiraLago with his wife Nina and their daughter in April.

Duchin says the couple looked at Heron Bay, but thought that MiraLago had good value with preconstruction pricing.

Maria DeChello, marketing manager for Watercrest, showed off an elaborate design center, which provides an array of customization options, before giving a tour of three model homes.

One of Standard Pacific’s strategies is to allow a fairly high degree of flexibility on the floor plans. For example, DeChello says balconies can be added on the front or back of some models or a two-story great room can instead have a loft. The builder also emphasizes a lot of windows in its home, which allows an abundance of natural light.

Both MiraLago and Watercrest have to adhere to what some call the anti-Monopoly building code in Parkland, to avoid blocks filled with the same-looking homes. Watercrest is doing that by having European cottage, Spanish Mediterranean and Italian styles, DeChello say

The Parkland City commission embraced the Parkland Royale concept partially because the 55+ community won’t have kids in residence that would add to the burden on schools. It recently won approval from the city for 538 single-family homes on 178 acres.

Mayor Udine says Parkland Royale is envisioned as a high-end, amenity-filled community with an array of activities for residents.

“Think of the biggest grandest cruise ship on land,” he says. ?