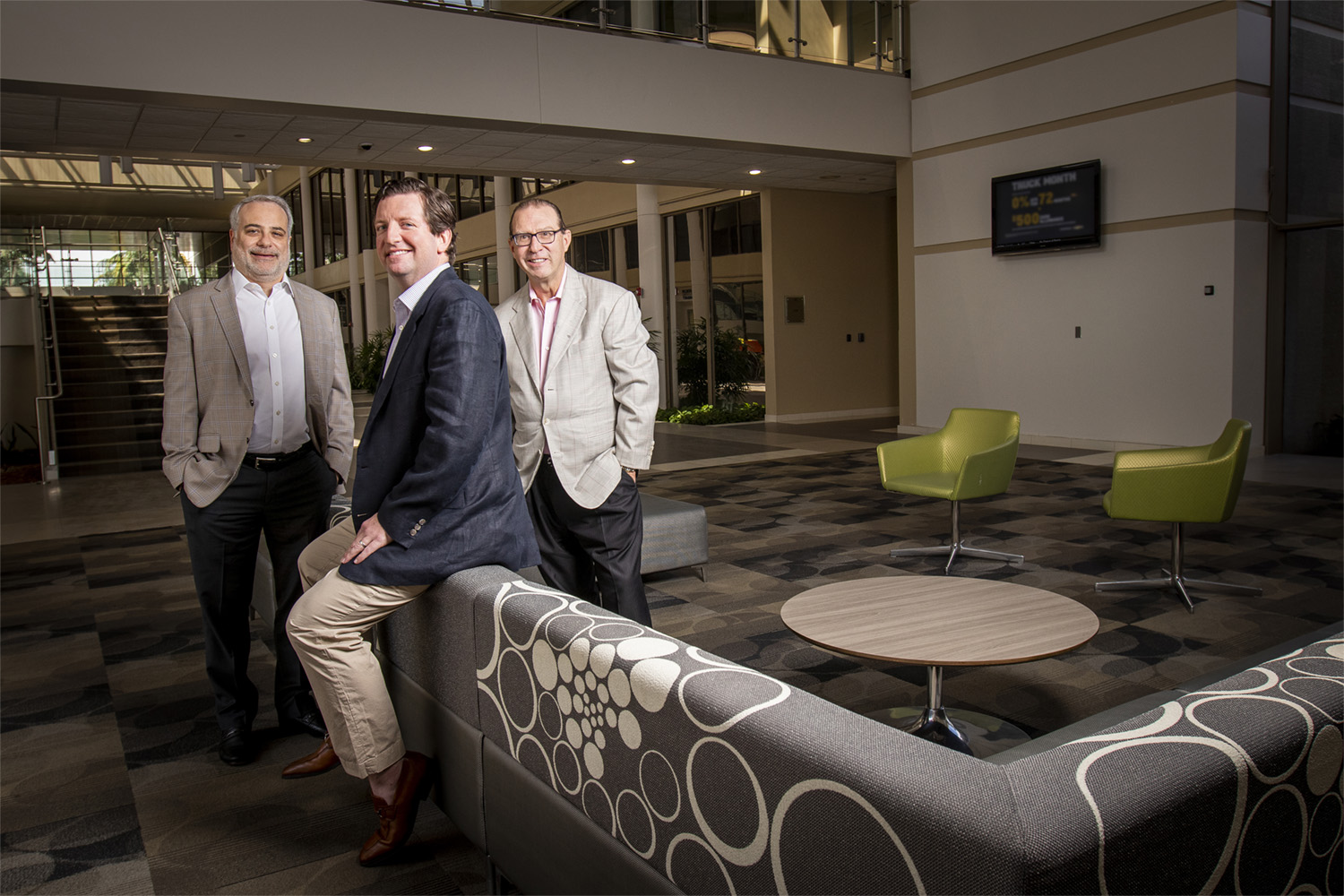 FlexShopper is poised for a rebound as it grows its e-commerce platform, finds more retail partners and expects more consumers who need alternatives to pay for purchases.

The 185-employee, publicly traded Boca Raton company (Nasdaq: FPAY) offers technology and retail partnership twists to a space long occupied by the likes of Aaron’s Rent to Own and Rent-A-Center.

Customers can go to flexshopper.com and apply for an account that provides up to a $2,500 credit limit. They can then shop thousands of products on the site or use a personal shopping assistant to help find what they are looking for. After weekly payments for a year, consumers own the products.

FlexShopper has partnered with Best Buy, Walmart, Amazon, Dick’s Sporting Goods, Office Depot and Overstock to provide products. In some cases, customers turned down for credit when visiting a retail store are referred to FlexShopper to get what they want.

SFBW interviewed three of FlexShopper’s key executives: CEO Richard House Jr., who joined in October 2019; Brad Bernstein, president, director and co-founder; and CFO Russ Heiser, who joined in 2015 after working in the investment banking field and serving as an adviser to family offices in South Florida.

Bernstein has a background as a CPA and was a partner in a consulting practice that did a lot of due diligence for investment banks in a variety of asset classes. Those include consumer and commercial receivables.

In 2007, he and some business partners raised $6.7 million to roll up some factoring companies and created Anchor Funding Services. Anchor provided finance opportunities for businesses that couldn’t get a traditional bank loan.

Anchor Funding was one of the first factoring companies to advertise on satellite radio about 10 years ago and over time purchased $500 million in receivables, Bernstein says. The company was profitable, but the field became crowded. In 2013, Bernstein was looking for a higher-growth opportunity and found a 60-year-old rent-to-own business that had not migrated online. Notably, neither had Aaron’s nor Rent-a-Center.

Anchor was sold in 2014 to focus on FlexShopper, which became profitable in 2019 and hit more than $100 million in sales.

“With technology, you can give a better proposition to consumers online,” he says. “Consumers can shop the latest and greatest electronics and furniture from the largest retailers, such as Amazon, Overstock and Best Buy. We’re allowing the consumer to shop for what they want, where they want, like everyone else.”

He describes the other side of the business as virtual lease-to-own “when you take rent-to-own out of the traditional brick and mortar and put it on e-commerce or a third party store like Best Buy or Tire Kingdom.”

Traditional retailers are embracing the concept because it provides broader exposure to sell products and saves the sale when consumers are declined by their primary financing offering.

The process is automated, and consumers know within seconds whether they get a spending limit or get declined.

FlexShopper has a big focus on mobile with its FlexWallet app. The consumer applies on the app, takes a picture of their order, such as a receipt or invoice, and then the app turns it into a state compliant lease that the consumer signs in the app. Then, a virtual credit card pops up that the consumer uses at the point of purchase.

FlexShopper pays the retailer 100 percent of the cost of the item and collects over time on the lease to the consumer.

On the FlexShopper website, certain retailers are associated with certain categories, such as Best Buy being heavy in electronics, Overstock in the furniture category and Amazon in tools. For washers and driers there were several retailers listed.

A menu on the left side of the website lists brand names and the cost per week.

The selection can be immense at times, such as 17,071 jewelry products

Prices on FlexShopper are aren’t comparable to retailers’ prices, since the transaction is being done via a lease and FlexShopper is taking on risk, House says.

Another advantage is FlexShopper offers zero money down while competitors usually require a down payment.

FlexShopper has developed its own algorithms and scorecards and has a risk and data science team.

The lease-to-own space took a dip during the last recession and then accelerated, Bernstein said as the COVID-19 pandemic was just starting in the United States. “You have people in higher-income brackets that get displaced and need lease-to-own.”

Heiser brings a background in investment banking at Bear Stearns and UBS to FlexShopper’s CFO position. A former colleague was working at FlexShopper in its early days and Heiser thought it presented an interesting opportunity. He started as a consultant in July 2015 and became CFO in December. His background in subprime financing helped attract Pimco as an investor in FlexShopper, he says.

FlexShopper needs to source funds to borrow and then lends it out as leases to consumers.

“A good part of what I do is understanding and coming to terms with credit-facility buyers, which is a function of advance rates,” he says.

The company has committed credit facilities through 2020 and into early 2021, he says. “There are really no concerns on that end. No fear of anyone pulling credit. We’re not subject to someone who could say, ‘I don’t want to fund business.’ ”

As FlexShopper grew, House joined as CEO in October to flesh out the relatively thin management ranks, Bernstein says.

“Rich has a very strong background in the nonprime space for many, many years. It’s allowing the concept of divide and conquer,” Bernstein says.

Bernstein now focuses on operations and business development, such as the high-growth B2B retail aspect of the business.

House has a background as a managing director at Equifax, where he helped developed new products beyond its core credit reporting business. He was president of publicly held Compucredit, which later morphed into Atlanticus Holdings. He then spun off Veta Finance, a nonprime lending company that he led in the United Kingdom.

House says he had experience with both prime and subprime clients and his analytical work background gave him an appreciation of what FlexShopper had to offer.

“This opportunity looked like same situation when I started Compucredit, but it didn’t have all the startup risk. The company was operating and the business model was improving. It had all the upside without all the hard work of doing startup and execution risk.”

House said he loved living in London, but he’s originally from Atlanta, so it was easier to live in the United States.

House likes the approach Bernstein is taking to ramp up partner sales, which doesn’t necessitate changing their systems, saying, “We can do a test in X number of stores. You don’t have to do anything in your system. They [consumers] have a virtual debit card that’s like a payment card to the retailer right in the app.”

Last year, FlexShopper built this out and created success cases. “Now we really need to focus on scaling this,” House says. Retail partners are now a bigger source of business, which also lowers the cost of customer acquisitions as well.

Of course, connections to retail created a lot of problems for a lot of businesses in the first quarter.

FlexShopper got off to a solid start at the beginning of the quarter, but then the economic contraction started to impact business late in the quarter. Gross lease originations were still up 20.6 percent, the company said in reporting first quarter earnings. The website stayed fully operational and provided customers stay-at-home shopping experience.

There was a significant drop of consumers purchasing at FlexShopper’s retail store partners because of shelter-at-home requirements, House said in a conference call with analysts.

FlexShopper also lowered the volume of direct to consumer marketing as it tightened underwriting criteria while assessing the impact of the pandemic, House said.

At the end of the quarter, the percentage of leases being paid in a timely manner was higher in March than in March 2019, a pattern that continued through April, he said. “While it is certainly difficult to see the future, we are happy our credit quality has remained strong to date.”

The company withdrew its upcoming financial guidance, but House said he expected the lifting of stay-at-home requirements would have a positive impact on leases flowing from customers at FlexShopper’s retail partners. “We believe that coming out of this, retailers’ demand for our services will be stronger based on increased pressure for sales.”