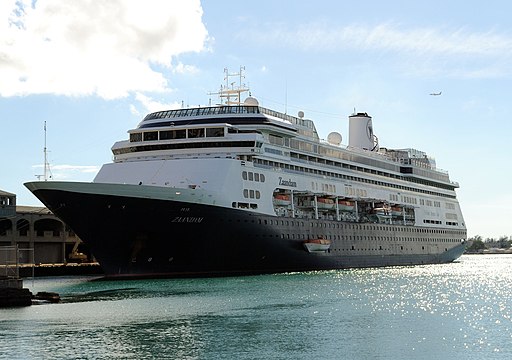 Will it dock at Port Everglades?

The unit of Carnival Corp. & plc said 53 guests (4 percent of passengers) and 85 crew members (14 percent) have reported to the ship’s medical center with influenza-like illness symptoms.

The cruise line didn’t say whether the deaths were caused by COVID-19.

Carnival and other cruise companies were also seeing their shares battered on Friday after federal stimulus legislation excluded them.

The Zaandam was in the Pacific Ocean off Panama on Friday with plans to transit the Panama Canal and dock at Port Everglades.

The Zaandam will need approvals from multiple agencies to dock at the Fort Lauderdale port.

The Zaandam was discussed at an emergency Broward County Commission meeting earlier this week with some commissioners opposed to the ship docking at Port Everglades. One suggested the ship dock at PortMiami and a medical center be set up at AmericanAirlines Arena. The arena is home to the Miami Heat, which is owned by Carnival Chairman Micky Arison.

While off Panama, the Zaandam rendezvoused with sister ship Rotterdam so medical supplies and additional medical staff could be transferred to the Zaandam.

Holland America planned to transfer health guests to the Rotterdam under health screening protocols developed by the U.S. Centers for Disease Control and Prevention (CDC). Any guests who are currently ill, or in isolation as a close contact, and all crew will remain on Zaandam.

Holland America said it continued to work with the Panamanian authorities on approval to transit the Panama Canal for sailing to Fort Lauderdale.

Zaandam was sailing a South America cruise that departed Buenos Aires, Argentina, on March 7, about a week before the cruise industry announced a 30-day shutdown. No one has been off the ship since March 14 in Punta Arenas, Chile.

On March 22, when the Zaandam first saw a number of guests reporting to the medical center with influenza-like illness symptoms, the cruise ship staff took protective measures, including asking all guests to self-isolate in their staterooms and implementing other precautions. All guests and crew received face masks on March 26 and were provided with instructions on when and how to wear them.

Complimentary telephone counseling services from Holland America’s care partner, Empathia, have been made available to guests and crew if they would like extra support during this time. For those with family members on board, they can call the following numbers for information: 877-425-2231 or (206) 626-7398.