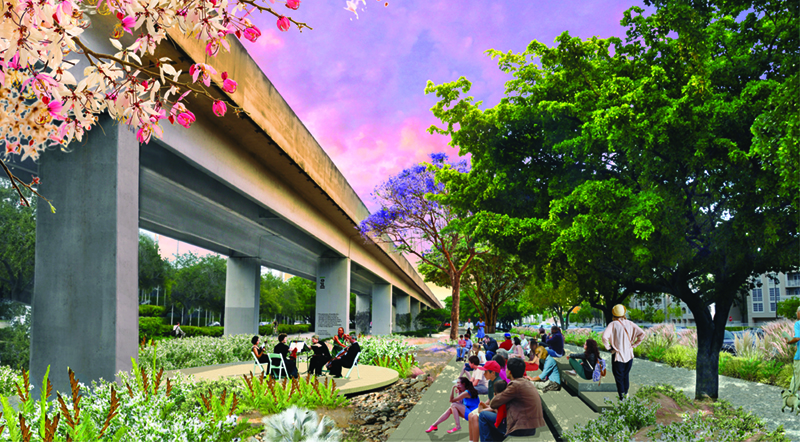 Second of a two-part series

Brightline and the new Tri-Rail service to downtown Miami are just the start of an ambitious plan to improve mass transit in Miami-Dade County.

There’s also an innovative plan for the Underline, which addresses one of the biggest issues in mass transit: making it easier, safer and more enjoyable to get to transit stations or just get some exercise. The Underline, a linear park and urban trail running under the Metrorail tracks from Brickell Avenue to Kendall, would be Miami’s version of New York’s High Line.

A new route for Tri-Rail

There are many big questions about the SMART plan, starting with funding and exactly what type of service would be created. Cost estimates range from $3.6 billion to $6 billion.

The most concrete proposal would appear to be the Northeast Corridor—Tri-Rail service from downtown Miami to Aventura. Ultimately, the Tri-Rail Coastal Link, as it’s called, could run all the way to Jupiter if other cities and counties buy in.

Meg Daly came up with the Underline idea

While the Coastal Link concept is still in its infancy, the biggest expense, a station in downtown Miami, has already been nailed down at Brightline’s MiamiCentral station near the Miami-Dade County Courthouse.

Starting later this year, some of the Tri-Rail trains seen along Interstate 95 are expected to use a revamped junction in Hialeah to head to downtown Miami instead of Miami International Airport.

The new Coastal Link would use the Florida East Coast Railway tracks, paralleling Biscayne Boulevard and serving such neighborhoods as the Design District, Wynwood, Little Haiti and Little River.

The Coastal Link would complement Brightline’s high-speed rail service, which will use the same right of way but have stops only in Miami, Fort Lauderdale and West Palm Beach.

The North Corridor aspect of the SMART plan would extend along Northwest 27th Avenue from the Martin Luther King Jr. Metrorail Station to Hard Rock Stadium and Calder Casino. Conceivably, it could be built as an extension of Metrorail, but streetcars or other form of light rail could be considered as an alternative.

Another SMART corridor plan would revive the Baylink plan to connect downtown Miami with South Beach. One concept could extend Metromover from the Museum Park station. Another possibility is a streetcar, which was proposed in 2015 by a French transit company.

The east-west corridor mainly would parallel the Dolphin Expressway and connect FIU’s main campus with Miami International Airport. CSX currently operates a freight rail line along the route.The other two corridors would start at the Metrorail stations at Dadeland. One would go for 10 miles along Kendall Drive to Florida’s Turnpike, while the other would run 20 miles along the busway route to Homestead. Light rail is mentioned as a possibility for both routes.If some of the concepts sound familiar, many of them were part of a 2002 plan when voters passed a half-penny sales tax with expectations that Metrorail could be extended by nearly 89 miles. What actually happened was a short extension to Miami International Airport.

The north extension of Metrorail along 27th Avenue was next up, but the money ran out during the recession, says Alice Bravo, director of the Miami-Dade Department of Transportation and Public Works. Some of the half-penny sales tax went to operations rather than new construction.

It wasn’t until the last couple of years that the county government has emerged from a budgetary crisis and could rekindle mass transit plans, Bravo says.

At the same time, the county’s strong economy has created worsening road traffic, which has helped the build more support for mass transit.

In the past, efforts to get projects done often devolved into a “my district first” attitude among county commissioners, so adoption of the SMART plan is somewhat of a Kumbaya moment.

“I think because of this approach, because it is about the entire plan and not one individual corridor, we have a real consensus now,” Bravo says.

Federal and state environmental studies will be needed to implement the SMART plan, Bravo says. Federal and state officials will want to look at local sources of funding, which would include the half-penny tax.

Miami-Dade Mayor Carlos Gimenez has said higher taxes might be needed, the Miami Herald reported. The county did receive good news in March when the state lifted a 12.5 percent cap on funding for mass transit projects that lack federal funding.

Beyond funding, zoning and density will be other factors, in looking at the elements of the SMART plan, Bravo says. Public private partnerships will be explored, which Tri-Rail is also considering for the Coastal Link.

Getting the mass-transit plan initiated is a must when it comes to economic competitiveness, Bravo says. “When you look across the country in November, there were 34 cities that passed a referendum for public transportation funding. It we don’t do it, we will fall behind.”

Meg Daly’s great idea came after a bad experience: She had a bike accident and broke both her arms. She had to go to a physical therapy appointment and pondered taking Metrorail.

“I thought that I could probably take the train and walk below the tracks to get to 22nd from the Grove station,” she says. “It was this hot summer day and it was literally this ‘aha moment.’ Why aren’t we doing something with all this land?”

Daly saw just what motorists going down South Dixie Highway see: a plain strip of asphalt under the Metrorail line that is lightly used and does little to create a sense of engagement.

Daly’s vision for the Underline would have lush vegetation, separate paths for pedestrians and bikers and locations for exercise, art and music events.

Daly has enlisted the city, the county park system and the Florida Department of Transportation to turn her aha moment into reality:

• The master plan for the Underline by James Corner Field Operations, a New York-based urban design firm, was completed in 2015.

• The Brickell area part of the Underline is in the design phase, and $8.5 million in funds have been secured to start construction in 2018.

• The Underline has secured $4.5 million in design and constructions from FDOT to continue from Brickell through the Roads neighborhood.

• The city of Miami has committed up to $50 million from park impact fees for construction.

• NPI International is building out one-third of a mile of the Underline as part of its Gables Station project, and South Miami Hospital is contributing a $250,000 healing garden.

• Sixty community events have been held along the Underline route.

That’s a lot of progress, given that the Underline’s nonprofit supporting organization wasn’t even incorporated until 2014. That’s why the Underline is being billed as the fastest-moving project of its kind in the United States.

Much of the project work will be to improve the safety of road crossings for bicyclists and runners. As Daly painfully knows, South Florida has been ranked among the five most dangerous places to walk and bike in the United States.

It also has some of the most-clogged roadways. South Dixie Highway has an F rating along with Kendall Drive and Sunset Drive, Daly notes. “You just need to bike or walk to a train station, and that will take hundreds of thousands of cars off the road.”

She also envisions the Underline as being the spine for a network of pedestrian and bike paths in the county.

The Underline also has economic promises.

New York City’s High Line, a 1.5-mile trail made from an elevated former rail line, attracts an estimated 7 million tourists a year. Daly says the Underline is similar to the Atlanta BeltLine, a former railway corridor being converted into a 22-mile multiuse trail, that is credited with $3 billion in private develowpment.

She expects the Underline will increase adjacent property values by up to 25 percent.

“It can help Miami make a bold statement on living, working and playing next to transit and creating less need for a car,” she says.

She thinks the project will appeal to millennials, such as her children, who are 31 and 29 years old. Her son found it wasn’t feasible to live in Miami without a car.

“There is a cost of not having the type of city they want,” Daly says. “Those kids are really clear that they want to be near public transit, have access to public transit and don’t want to pay $9,000 a year for a car.” ♦