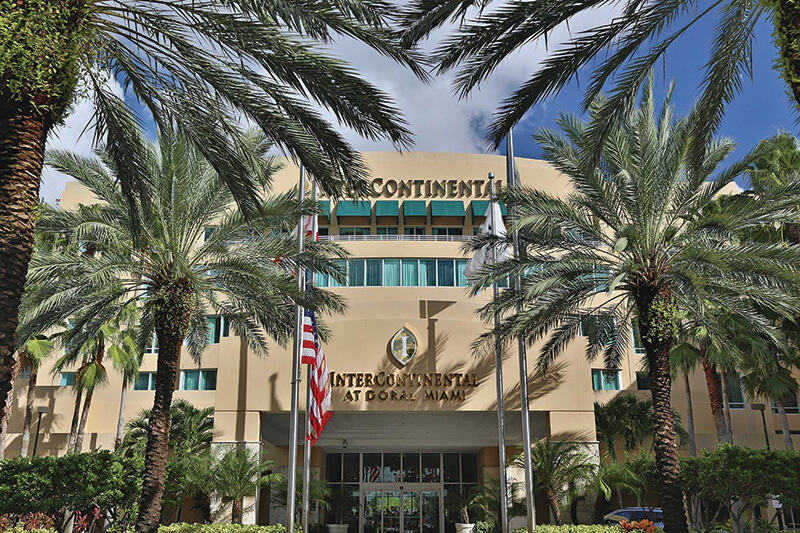 Got to get away? Doral hotels are ready

Located just a short drive from Miami International Airport, Doral has made its mark in the hospitality industry.

The granddaddy of Doral hospitality is Trump National Doral Golf Club, known as home for the world-famous track the “Blue Monster.” The late real estate pioneer Alfred Kaskel founded the club in 1962, and in February 2012, the Trump Organization purchased the Doral Resort & Spa for $150 million.

The final phase of a $250 million redesign project of the member clubhouse is slated for completion later this year. The clubhouse will feature a concierge, well-appointed locker rooms, and a members-only restaurant with sweeping views of the Blue Monster Course from nearly every seat in the dining room, bar and terrace. Executive Vice President Eric Trump has overseen the renovation project.

Trump Doral sits on 800 acres. In addition to its four championship golf courses, it offers a state-of-the-art practice facility with lighting for nighttime play, True Spec club fitting and the new Rick Smith Golf Performance Center, which some rate as one of the country’s best.

“Rick is an exceptional talent, who coaches the most elite and well-known players in the world,” Trump says.

Provident Doral at the Blue Miami

The Blue Monster at Trump National

The club also has a 48,000-square-foot spa, a comprehensive fitness center, and dining options that include steakhouse BLT Prime and Champions Bar & Grill.

An $8 million renovation project was completed in 2015. It included an upgrade to the restaurant, the front lobby and front doors, says general manager Randal Pasut. “It’s a more vibrant atmosphere,” he says.

The InterContinental features an outdoor pool, a 24-hour fitness center and the Blue Matisse restaurant, which Pasut describes as “a different eating environment with a new menu. It’s old Latin American with Asian fusion. We cater to everyone.”

The hotel offers 24-hour room service, and on its executive floors, there’s a club lounge with a private atmosphere.

Provident Doral at the Blue Miami

Ranked as one of Miami’s top 10 resorts by U.S. News & World Report in 2015, Provident Doral features an all-suite set up, including studios, one-bedroom and three-bedroom accommodations.

“We are a condo hotel with 30 percent of our guests being corporate travelers, 30 percent individual travelers here to play golf or go shopping, [and] the rest is a mix of government employees,” says general manager Wolfgang Wehen. “We have a lot of extended stays.”

Provident Doral is different from most other resorts, Wehen says, pointing out the rooms are in 15 buildings and guests can park their cars right in front. He also says Provident Doral attracts many government officials to dine. “As we speak, Doral’s city manager is in the restaurant,” he says. “We’re close to city hall.” k