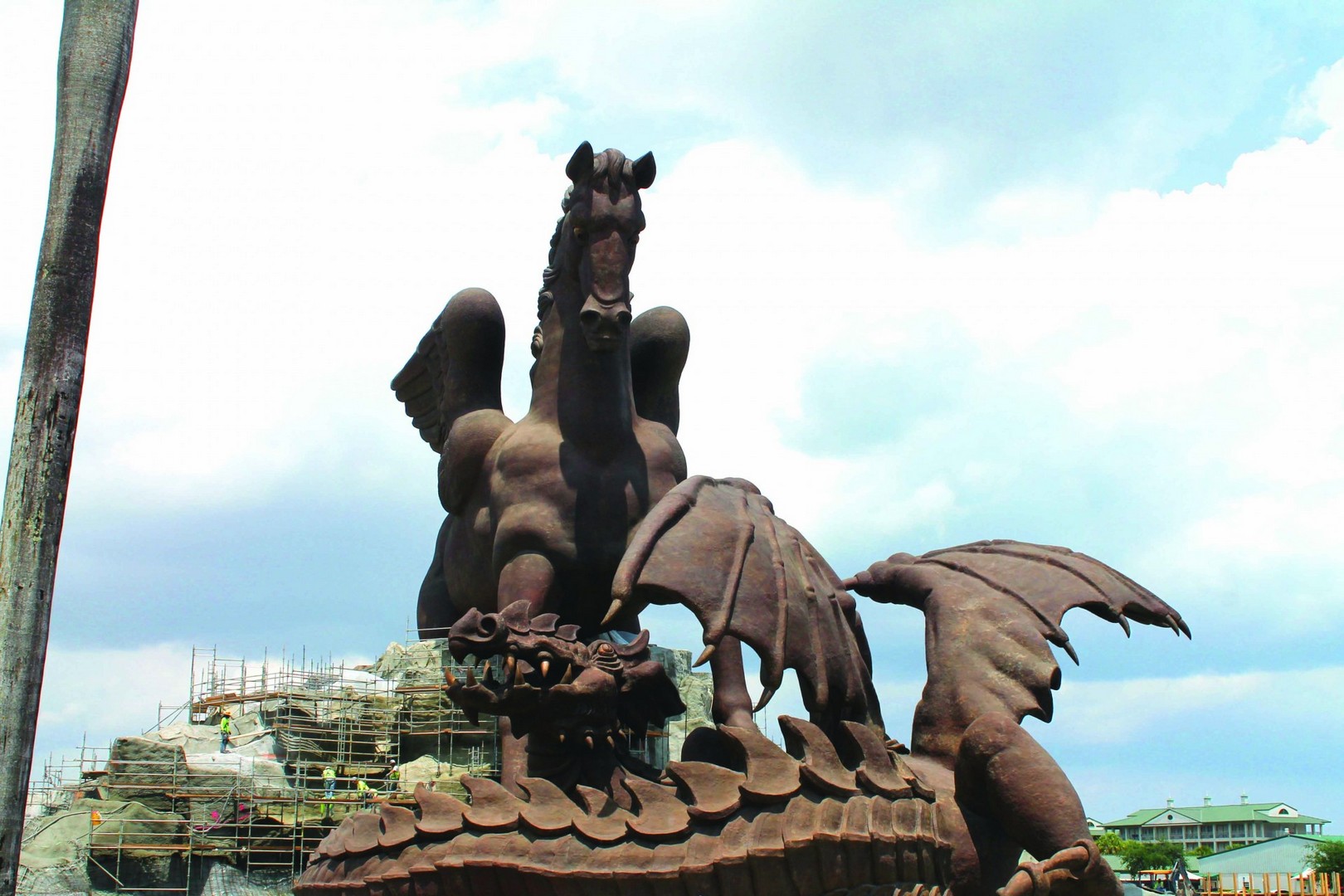 The 110-foot-tall statue of Pegasus slaying a dragon not only symbolizes Gulfstream Park owner Frank Stronach’s love of horses, but his determination to turn the track into a major family-friendly destination.

Stronach is a deep-pockets owner, whose net worth is estimated at $1.4 billion by Forbes. He founded Magna International, an automotive manufacturer in 1957. It had $36.64 billion in 2014 sales, but Stronach sold his equity interest for $870 million in 2010.

You might call Stronach, 82, the Warren Buffet of the equine set. Much like the “Oracle of Omaha,” he’s not afraid to give his opinions on big issues. He loves free markets and liberal politics, but rejects socialism. In 2013, Stronach received a $52 million paycheck from Magna, which drew criticism in some circles compared to average worker pay, but he exhibits passion about the need to treat workers fairly.

It takes a village

Stronach is the founder and honorary chairman of Stronach Group, which has an array of horse industry businesses (see sidebar box), including Gulfstream Park and The Village at Gulfstream Park. He is a longtime breeder, and his horses have won some of the biggest races around, including the Breeders” Cup Classic, the Preakness Stakes and the Belmont Stakes. He has turned Gulfstream Park, which he bought 14 years ago, into a mixed-use urban center that includes restaurants, entertainment venues and office space.

SFBW caught up with Stronach at The Village’s Frankey’s Sports Bar, one of the many new developments at the park.

“The old Gulfstream Park wasn’t that conducive to customers,” Stronach says. “Having had horses for many years, I had the chance to see pretty much all of the racetracks. They were so outdated. I don’t think they looked after the customers, but they all had great directors” rooms where the food was good.”

Racetracks didn’t worry too much about delivering a great customer service experience because they were monopolies in their markets, Stronach says. “Monopolies are bad whether they are private monopolies or state monopolies. I said, one of these days I’m going to change the racetracks.”

The Village at Gulfstream Park is far from complete. It just added a Strike 10 Bowling & Sports Lounge and a 10-screen Cinemex theater will be built behind Frankey’s. Expect big, comfy chairs and servers who will bring you caviar and Champagne, if you like.

Earlier this year, Adena Grill, named after Stronach’s 90,000 acres of ranchland, forests, fields and pastures near Ocala, opened as an upscale restaurant with a 7,000-bottle wine cellar. Stronach plans to add an 18,000-square-foot Adena Farms market by the end of the year.

The meat comes from Adena Farms, where animals are kept in conditions that involve no pain, no stress, no hormones, no antibiotics and no genetically modified organisms, Stronach says. “I think the public is more and more aware of the old saying, “We are what we eat.” We still eat a lot of chemicals, and I want to provide food without chemicals.”

Stronach also plans to add a horse museum within the next few years, while the inside of Pegasus may include a multimedia presentation area. He wants to appeal to children, including girls, who love horses, he says. He’s also planning two hotels of about 220 rooms each on the north and south sides of the track clubhouse and five residential towers on the west side of the track. He expects a hotel flag that’s above a middle-market brand, but not ultra-luxury.

Pegasus and the dragon

The most notable addition, though, is the gigantic statue of Pegasus along Federal Highway.

“I wanted to have something that said “wow!” Stronach says. He was inspired by some of the pictures of Pegasus from his large library of horse books.

While Greek mythology describes a couple of Pegasus” encounters with dragons, Stronach has a bit of a cultural concern. “I should have done a little more research, because the dragon is favorable in China,” he says, adding that he doesn’t want to offend anyone. With a grin, he says, “I had to switch it around to say Pegasus is making love to the dragon.”

Stronach is passionate about horses, saying they’ve made a great contribution to civilization.

While he agrees with the notion in general that gaming is a tax on the poor, he says horse racing is different. “If we look back to the farthest side of civilization, people gambled on horses. It’s more a game of skill than a game of luck,” he says.

The industry also doesn’t do a good job of telling how much economic activity it creates, he says. “I think there are a million people involved directly and another 5 million indirectly.”

Stronach sees signs of progress at Gulfstream, with a growing number of visitors and a drop in the age of the average attendee.

As passionate as he is about horses, Stronach grew even more animated when asked about his liberal politics. He says the key is what structure society should have to eliminate poverty.

“Have you ever heard of the golden rule?” he asks. He wasn’t referring to the rule about reciprocity, but rather, “Whoever has the gold, makes the rules.”

He says, “The world is still dominated by the golden rule. I don’t want to be dominated by anyone and I should not dominate anyone either. It boils down to how can we dismantle the chains of domination.”

Workers have a moral right to profits that they help generate, he says. “As a society, we must make sure that workers and employees – not just capitalists – have a chance to participate in wealth creation. Thereby you would spread the gold.”

Stronach says he built Magna from scratch from a garage to a 145,000-employee company, and it was the only corporation at the time to have a constitution.

Here is his formula for dividing up profits: Workers get 10 percent (half in cash, half in stock), shareholders get 20 percent in the form of dividends, managers get 6 percent and charities get 2 percent. Another 7 percent is allocated to research.

He describes Magna as the largest, most diversified automotive supplier in the world, but it’s also capable of turning out complete vehicles such as the BMW Mini Cooper and the Aston Martin Rapide.

His daughter, Belinda, now chairwoman of Stronach Group, is the former CEO of Magna. She was a minister under Canadian Prime Minister Paul Martin from 2005 to 2006 and was a member of the Canadian House of Commons from 2004 to 2008. She was elected as a Conservative, but later joined the Liberal party. Stronach’s son Andrew is involved in the thoroughbred operations, too.

Although Stronach grew up in Austria and made his fortune in Canada, he has a deep appreciation for the United States. “I consider the U.S. the only country left where free enterprise has a chance to survive. I had about 400 factories worldwide, so I have seen the field for many, many countries in the world. I think I’m more American than most natives,” he says. “I keep telling the politicians here that if we fail to give employees an opportunity to participate, we will have socialism. Socialist philosophies don’t work because they are so preoccupied with the distribution of wealth. You have to create wealth first. If you don’t, there is nothing to distribute.” ?

Politics: Founded the Stronach Institute and the political Team Stronach in Austria